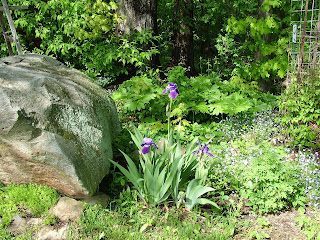 I debated getting Iris Bleu Gris for weeks before finally deciding to take a chance on it. Before this, I tried several other Maitre Parfumeur et Gantier fragrances, most of which I've written about: George Sand, Camille de Chinois, Ambre Precieux, Parfum d'Habit, Or des Indes and Eau des Iles. I wasn't thrilled with Parfum d'Habit and ultimately didn't buy a bottle. There were huge discrepancies between the way it smelled to me and the way I'd heard it described. It was tamer, lighter, almost sheer, and decidedly fleeting. Lovely, but I decided early on that when it comes to skin scents, you can never have too few.

That discrepancy and lack of forcefulness made me suspect that Iris Bleu Gris would be nothing like I'd read. Ironically, curiosity about Iris Bleu Gris was what brought me to Maitre Parfumeur et Gantier in the first place. I love iris but find that it's such a variable note in fragrance. It seems to be one of the most interpretive, and it has polar attributes which appeal to different perfumers and wearers, defining iris for them in contradictory ways. I'm more often unenthused by an iris scent than those whose reviews I consult, it seems to me. It doesn't help that many of the current iris iterations introduce a peppery quality I find about as appealing as maple syrup on garden salad.

Eventually, I spent more time with Ambre Precieux, and saw how wonderfully it lasts and evolves on the skin. I revisited all the Maitre fragrances and found similar, equally admirable complexity. I'd dismissed Ambre for various reasons initially. I can't enumerate them, as they were, I think, mostly instinctive and reactionary, a product of very specific expectations and subsitutes for lack of better words to describe or articulate what appeals to me. Once those expectations dissolved the true merits of the fragrance emerged, its rich, cozy ambience, its steady, mildly herbal diffusion and warmth. Ambre Precieux isn't a skin scent, but it works differently on my skin than equally persistent fragrances, which substitute volume for nuance. Ambre projects in a much more refined, subliminal way.

My fears about Iris Bleu Gris were entirely unfounded. Granted, it smells nothing like I expected. It simply smells much, much better. The treatment of iris predates the current interpretation, which aims at the root and photo- or hyperrealism at or around ground level. I imagine many people, having been fed on fragrances like Iris Silver Mist and Bois d'Iris (to name a few of the more popular contemporaries), might de disappointed by Iris Bleu Gris. Its deployment of iris is subtler, less overtly woodsy or astringent. That isn't to say that the iris is warmer than, say, Iris Silver Mist. An unmistakable affinity exists between the two. There are absolutely medicinal influences in Iris Bleu Gris, but they're not as literal-minded as you might expect. There's earthiness but your nose isn't rubbed in it. Where other iris fragrances dig into the dirt to expose iris root and whatever happens to be clinging to it, Iris Bleu Gris evokes the smell of damp soil in the open air. It widens its net to take in a broader picture of iris in bloom, perfectly content to stay above ground, approaching the subject panoramically, at eye level.

When you focus on singling them out, you detect individual notes: jasmine, moss, vetiver, vanilla. When you relax into the fragrance, they cohere into an associative whole, augmenting the iris note in ways which feel by turns austere, dewey, lush, and intriguingly piquant. Many talk of a leather note in the mix, some going so far as to make comparisons with Jolie Madame and other vintage leather chypres. I can get on board with that, though I would characterize the leather as soft and supple, more hand glove than car seat or horse saddle. The opening of the fragrance, though in no way candied, is practically fruity, indicating a currant note. This dances in and out of the heart but has so well integrated by the dry down that it enhances an overall sense of sharpness and cool languor.

As many have commented, the extended dry down is sublime. The wondrous thing about Iris Bleu Gris is how close it comes to so many dread accords before surpising you. Iris Bleu Gris is in control, working expertly on your senses by combining familiar notes with unexpected results. You might expect things to go powdery, for instance. The fragrance certainly seems headed in that direction. And yet it stops short, showing what a difference a fraction makes. This keeps you engaged in unique ways, alive to the perfume's continual evolution the way you might listen for the various layers of sound outdoors, surprised by the depth and texture your subconscious mind normally tunes out or takes for granted. Exquisitely calibrated, Iris Bleu Gris demonstrates the highest level of artistry and craft, resulting in a testament not just to Jean Laporte's particular gifts and strengths as a perfumer but to the imaginative and emotional territory perfume can access. This is an exceptional fragrance.
Posted by Brian at 4/03/2009 11:52:00 AM

I find myself fairly ambivalent toward iris fragrances as a whole. I keep trying new ones, but most leave me cold (I don't get what people love about Iris Silver Mist, as one example). The scent that made me realize how great orris can be was Ayala Moriel's Sahleb (smooth and creamy, and warm rather than cold, undeniably due to the high quality orris butter). Iris Bleu Gris is another iris scent I've been wanting to try but haven't gotten to yet. I love the subtlety of Ambre Precieux but haven't fallen for any other MPG. Your review has me curious about Iris Bleu Gris again.