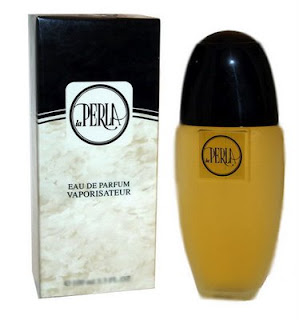 Every once in a while I suddenly stop ignoring a scent I've willfully disregarded for an extended period of time, and give it a smell, and it turns out to be a real sleeper. For a year I've been going to this kiosk in the mall. They have some rarities, some discontinued items, some stuff you'd otherwise have to get online. They're not the cheapest place but they're handy, and a short drive across town. There are all kinds of things in this little glass square planted in the center of the mall, many of which, even when scouring the shelves for something I haven't tried before, I consistently turn up my nose at.

I don't even think I really ever gave La Perla much more than a cursory glance. The name sounded cheap and negligible. The black and white box looked even cheaper. Sandwiched between Il Bacio and Elizabeth Arden's Blue Grass, La Perla seemed determined to defy my attention span, hell bent on boring me. I don't know what struck me yesterday but I decided to give it a chance.

Turns out it's better than a good third of the fragrances I own. A rose chypre in the style of the old Coriandre (R.I.P.) and Halston Couture (So Long, We Hardly Knew Ye), closely related to Aromatics Elixir, Miss Balmain, and even, more recently, Etat Libre D'Orange's Rossi de Palma and Agent Provocateur, it has persistence and diffusion like very little on the market today. It has a discernible amount of oakmoss in it and enough patchouli to satisfy the die-hard, as well as Coriander, cardamom, ylang ylang, honey, orris, vetiver, sandal and benzoin. It costs all of 35 to forty bucks.

You would think La Perla dates back to at least the mid seventies. It smells old school, rich and warm and happy to reach out and greet the casual passerby. It's bold but textured and complex. Like Aromatics Elixir, it's forceful without being a bully.  It smells classy and a bit déclassé, playing out these contradictions as it dries down on the skin.  It's like a fragrance your mother wore yet it feels modern, as if determined to step into the near future.

In fact, it was created in 1987. La Perla, basically a panty firm, has something like a dozen fragrances under its belt--no pun intended. Who knew? I didn't. I'm not a big fan of panties, as you can imagine. "La Perla" was the first fragrance, after which followed IO, Eclix, Creation, Charme, and others. I suppose La Perla could be considered a glorified Victoria's Secret, but "La Perla" is better than anything that fixture of the local mall ever produced, as far as I know. It was created by Pierre Wargnye, the nose behind Drakkar Noir, Tenere, and a bunch of masculines I find dreary and uninspiring (Antidote, anyone?).

Now that they've absolutely destroyed Coriandre, which remains on the market as a frail ghost of its former self, it's reassuring to know you can still find something like it, an alternative or a compliment to Aromatics Elixir.  La Perla achieves the depth of focus found in those classic rose/floral/leather chypres with a level of sensory detail that approaches photo-realism.
Posted by Brian at 4/16/2009 05:26:00 PM

I'm loving this. Finding the forgotten treasures, and if they are $40 or under and still contain the good stuff -- the oakmoss, bergamot, etc -- so much the better.

Oh, I love La Perla! It's warm but not heavy, and it leaves a lovely trail. It's a cheapie but goodie. I've tried some of their others, though, and they really don't come close.

I can see why you say it is kin to Aromatics Elixir, but to me there is one big difference which makes LP my favourite - AE gives me a stinking headache!

Oakmoss, eh? I think I better stock up on LP... God knows it's cheap enough.

That's been my exact experience with La Perla! But now, suddenly, I feel compelled to give it a second look.

Gee, thanks for that (as if I'm not presently swamped in samples as it is).

Does AE give you a headache, Tania?? Oh man, I would truly be sad if it did me. It's one of my favorite things to smell. Yesterday I finally got a whiff of Clinique Wrappings, another one that gives people migraines. They only sell it at Christmas but I figured some Clinique counter somewhere MUST have a tester bottle. My verdict: I love it, of course. Seems I'm destined to give everyone around me a splitting headache. La Perla is fantastic.

Aala, I feel your pleasure/pain re samples. I have a bucket full, which will hold no more. Now I need another bucket. Definitely check out La Perla next time you come across it. I'd be interested to know what you think.

I wish I can find IO la perla. It is discontinued. La Perla smells too strong and has a patchouli scent. I prefer Io la perla because it is soft and flowery. Does anyone know of a similar smell?

I have never seen this perfume for $40. I live in Canada, have worn this ever since it came out and I have never bought it for under $100. You can only get it in Holt Renfrew here and it is now $150. Gorgeous perfume. So well blended, so sophisticated, but so sutble - you will be admired for such a perfect selection. I am so used to the compliments - hundreds over the years - and I just smile. It's my secret scent!