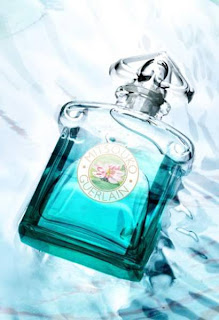 Along comes a Mitsouko flanker. Initially I was appalled. Then I read some positive early reports and became intrigued. The bottle arrived in my hot little hands five days ago and I’ve been pondering it a great deal. My first reaction was to spritz original Mitzi on one wrist and Fleur de Lotus on the other. I’m not sure why I did this because how could a flanker ever compare? I think the point is that Fleur de Lotus isn’t supposed to be Mitsouko, it deserves a wearing on its own. Well, the only reaction I’ll share about the side by side comparison is that 1 single spritz of original Mitzi (and I do not have vintage, I simply have a bottle of edp about 5 years old) is a million times stronger, deeper and full of character compared with Fleur de Lotus. If you love the original Mitzi, I don’t think a side by side comparison is a good idea – the original overwhelms it – I could barely detect Fleur de Lotus and kept smelling the original because I love it so.

When I wore Fleur de Lotus solo, it became more obvious that it’s inherently Mitzi, at it’s core, albeit with a softer, gentler, more floral and aquatic nature. Those who find original Mitzi too heavy or think it’s dated will likely find that they can enjoy a nice light chypre in Fleur de Lotus. Fleur de Lotus is pretty, it’s well done and it’s easy to like. I can only speak for myself in saying that I’ve never been on the look out for a Mitsouko “Lite” for the summer months. But for those looking for a well done Mitsouko “Lite,” this is it.

My bottom line is this: I think Guerlain created an admirable flanker to original Mitzi. This seems an astute business decision on their part. Fleur de Lotus will probably sell quite well because it’s much more contemporary and less challenging. I suppose I’m feeling a little depressed about Fleur de Lotus because while it’s a nice perfume, paying respectable tribute to the original, I have a sense of loss because of it. The classics have already gone the way of the dinosaurs due to IFRA restrictions, and with all the lighter, aquatic, more contemporary perfumes on the market it’s no longer possible for me to pretend that Guerlain isn’t simply in the business of making perfume. Of course this has always been the case, creating perfume is a business, so perhaps I’m just getting old, and frumpy. Fleur de Lotus is nice, if you’re curious, it’s worth a try.
Posted by Abigail at 4/29/2009 03:54:00 PM

Anonymous said...
This comment has been removed by a blog administrator.
April 30, 2009

Wow, Mitzi and aquatic: Does. Not. Compute. I can't even begin to wrap my head around that combo.
I'm intrigued, though, I must say! Where did you find your bottle? Is it readily available yet for us poor slobs deprived of easy access to Bergdorf's Guerlain nook?

I should say that aquatic is probably going too far. In the beginning I smelled a definite aquatic quality, but once Fleur de Lotus dries down, it loses the obvious aquatic note and becomes simply a bit wet, moist and mossy. It's actually pretty darn good - as much as it's killing me to admit it!

I ordered mine from Bergdorf's in NYC. For now I think Bergdorf and Guerlain boutiques are the only purchasing options...