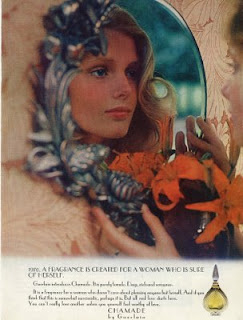 Few perfumes are as flat out lovely as Chamade, with its fuzzy but piercing top notes (galbanum, hyacinth, bergamot, greens) and its floral heart of jasmine, ylang ylang and black currant buds. Designed by Jean Paul Guerlain in 1969, Chamade is a brilliant evocation of Spring, an awakening of the senses, a heady mixture of pollen, dew, and fresh blossoms laid out over the classic Guerlinade signature of iris, tonka bean, vanilla, rose, and jasmine.
"During the time of Napoleon," Guerlain copy reads, "the drum was the means of communication between the general and his soldiers. There were several kinds of drumbeats including the 'chamade', a very fast beat which was an order to retreat. Is there a heart that has never beaten wildly? Who can pretend never having their heart turn upside down, so appropriately symbolized by the upside down heart of the flacon? Chamade by Guerlain embodies self-surrender in the face of love. "

The perfume was partly inspired by a Francoise Sagan novel. La Chamade (1966) told the story of Lucile, the young mistress of a wealthy older patron, who falls unexpectedly and helplessly in love with a younger man. In 1968, a year before the fragrance was created, a movie adaptation hit the theaters, and it seems likely that Guerlain's presiding influence was Catherine Deneuve, the film's iconic French star; more so than the novel itself or even the film. Deneuve would serve as muse to Guerlain again, a decade later, resulting in Nahema.
While the copy above suggests a state of weak-kneed infatuation, the swooning intoxication of first love, the book and the film depict a woman who at a young age is already jaded when it comes to matters of the heart. In order to stay with a man she doesn't love, she shuts down her feelings. Consistent with Sagan's body of work, the story deals essentially with lost, even doomed love among the wealthy and the disillusioned. Ultimately, after moving in with him, Lucile makes a decision to leave her young lover, returning to the life of luxury afforded by her loveless arrangement with a man more than twice her age.
So cool she was almost supernaturally detached, Deneuve seemed the perfect choice for the role of Lucile, and Guerlain's Chamade has a lot to do with that curiously aloof quality she embodied, with its undercurrent of existential discord. Like the story and the movie adapted from it, Chamade the fragrance is about heightened inner feelings coming up against an icy, placid exterior. Far from being a sweet, lovely perfume, indicative of innocence and naivete, Chamade is, as the ad in question states, about 'a woman who is sure of herself'. Because she is so sure of herself, the feelings of intense emotion induced by love are that much more intense, and lurking under every new beginning is the sense of unhappy ending and decay, a state of affairs which imbues Chamade with a slightly melancholic subtext. Lucile returns to comfort and advantage, after all, because life is short and she doesn't want to feel the pain that comes with happiness. She would rather be dead to the world than alive to the chaos of the universe. A poster for the film, far from sweet and romantic, depicts Deneuve and her suitors bundled together like sticks of dynamite. 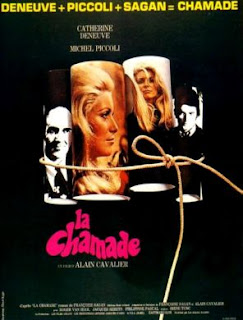 The model in the ad resembles Deneuve. She faces herself in the mirror, confronting the surface impression other people see when they look at her. Her lips suggest a private smile--or a faint derangement, part pleasure, part sadism. Perhaps she's just been introduced to a man who has swept her off her feet, exposing her vulnerability, and, for the time being, she doesn't mind being floored. Perhaps the smile is self-satisfactory. She's pleased with the image she projects to the world, or sees herself differently, now that she's in love. Maybe she's fooled everyone, even herself, and now the truth dawns on her: this exterior isn't so hard after all. The photo captures her before she has the sense to be frightened by the approaching lack of control these new developments augur.
A vase of Tiger Lilies sits between her and her reflection. Lilies in general are said to symbolize feminine qualities of mercy, compassion, kindness and unconditional love. The Calla Lily indicates a sober female magnificence; the Pink Lily, coquetry. The Tiger Lily represents the more powerful aspects of femininity as well as, in general, fierceness, power, and strength, all of which are in keeping with the source novel. Bold orange in color, the Tiger Lily suggests personal success, wealth, pride, and self-direction, a fiery intensity of emotion verging on combustion. "I dare you to love me," the Tiger Lily says. The model touches the edges of the mirror as if trying to get ahold of herself.
Posted by Brian at 4/12/2009 06:17:00 PM

You present this so beautifully, Brian! I'm so tempted to look for the fragrance due to your storytelling. The whole "cold exterior, burning interior" story just reels me in.

Thanks Eileen. It was fun to write. Learning a little more about the fragrance made me see it differently. I'd always thought of it as simply cool and fresh, as that's how I'd read about it. Knowing the source material gave me a knew way of looking at it, and I sensed things in there I'd only been subconsciously aware of before. Chamade was one of my guilty pleasures back when I purchased it, in the sense it was so allegedly femme and expensive for something I couldn't find a lot of places to enjoy openly. Now of course I'm shameless and wear whatever wherever.