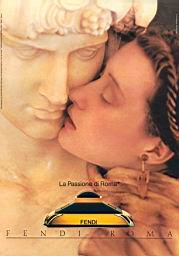 With so many of the greats set for discontinuation, it probably seems silly to wax nostalgic about the original Fendi, which was discontinued all the way back in 2005, before any of the crippling restrictions went into effect. Even recently extinct Palazzo is a more practical cause celebre.  Still, before I'd ever heard anything about Guerlain or Givenchy, I was spending what seemed like a fortune at the time (1985) for a bottle of Fendi eau de toilette. It was one of the first perfumes I ever bought, and though it was intended for women and owning it would give me some explaining to do, I couldn't help myself. I had to have it.

I've always been a sucker for a good wood smoke fragrance, which is what I took Fendi to be. I had no idea what was actually in it.  I only knew they sold it in the women's department, and that I loved it beyond reason. Now I know the pyramid: cardamom, coriander, bergamot, mandarin, laurel leaves, lily-of-the-valley, geranium, cypress, cedar, moss, labdanum, tonka. What's most remarkable about this incredibly potent perfume--potent even among its eighties sisters--is how devoid of floral notes it is. What, even then, made it feminine? It has less florals than most of today's men's colognes. Dior Homme is far more floral than Fendi, but so are less overtly flowery male fragrances.

Smelling Fendi now, years after first purchasing it, I'm able to examine it a lot more closely, a little more out in the open, and I realize it really isn't a wood smoke fragrance either, not officially, not exactly.  It smells leathery, with incense undertones, a pronounced herbal influence, and spices.  The spices, of course, aren't polite.  Cardamom gives Fendi a piercing, camphorous quality, a touch of resinous warmth; coriander magnifies the combustibility, reinforcing the overall terpenoid character.

As it turns out, Fendi has a lot more in common with masculines than feminines, a disposition signaled by the advertisement, which depicted a woman snuggling up to Michelangelo's David, perhaps her inner male.  Fendi is closer to aromatic fragrances like Kouros (geranium, coriander, laurel), Trussardi (laurel, geranium, tonka, landanum), and Paco Rabanne (tonka, geranium, laurel) than Poison, Giorgio, or Paris.  Several years later, Fendi would affirm this by producing Fendi Uomo, a more officially masculine variation on the women's fragrance, close enough in spirit that the two might as well have been brothers.

Both EDT and EDP require a light touch.  Fendi EDP is a little less overtly smoky to my nose, but the dry down comes very close to what you get in the EDT.  Both have off the chart longevity.  Comparisons have been made to balsamic orientals like Youth Dew, Bal a Versailles, and Opium, but Fendi is nowhere close to keeping that company.  It has no fruity embellishments and, as mentioned, no discernible floral backbone.  Granted, Youth Dew is no delicate flower itself, but Fendi is butcher still, and maybe even ahead of its time.  Ten years younger, it relates very clearly to the original Comme des Garçons by Marc Buxton (geranium, cardamom, coriander, nutmeg, labdanum, cedarwood) and it has more than a little in common with Comme des Garçons 2 Man, as well, also by Buxton.  Michael Edwards classifies Fendi as a floral chypre, which seems a bit of a stretch.  Still, though not listed, oakmoss is in the basenotes, and lily of the valley IS, after all, a flower.  Fendi is still available online.  I would love to know who created it.
Posted by Brian at 4/13/2009 05:55:00 PM

I'm also a man who bought a bottle of Fendi EDT upon its launch, because it was so strange and intoxicating and unlike anything on the market on either side of the aisle. It didn't smell quite like smoke to me, but it had a burnt-sugar quality, like leather soaked in molasses, that I couldn't resist. Insanely strong, of course, as were most scents marketed to women at the time.

Years later I got a tiny amount of the perfume and it was, unexpectedly, more floral than the EDT. (Perhaps it had been reformulated by that time.)

Hey Pyramus, Can I just say, I love your blog. I've posted comments a few times just to let you know, I think, unless I chickened out and simply remember incorrectly.

I love your description of Fendi, too. Leather soaked in molasses is exactly it. When I got the EDP I thought something had changed. Now I think I was wrong.

In Atlanta last weekend I got a knock off fragrance oil which smells identical, and lasts forever and a day. Something about the oils sold in this shop separates the different layers as if suspending them on parallel paper strips. The smell is the same but it all pops out at you, and you can really discern and appreciate how complex these older perfumes are (and, sadly, were).