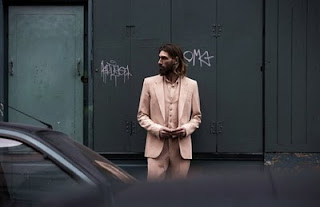 Latest perfume sighting in a movie: the not at all terribly bad Pick-Up Artist with Molly Ringwald and Robert Downey Jr. In it, Downey lives with his grandmother in a NYC apartment. At one point, his grandmother has met a suitor in the park (remember those? Suitors, parks) and is getting ready for a date with him. Her vanity is full of perfume bottles, the brands of which I couldn't make out. There must have been at least a dozen of them scattered about. Every time I hit pause a little bar appeared on the TV screen to show where I was in the film. I couldn't see a thing but the bar.

The last time someone commented on my perfume: recently, at the last second, I decided to accompany friends to a wine bar down the street. When I got in the car, the woman beside me on the back seat said, "You smell so damn good." I was wearing Neil Morris Afire. I go so long without anyone commenting on my perfume that it can sometimes feel like I've been cooped up for weeks without talking to anyone. I forget what my voice sounds like, or what it feels like to engage in conversation. 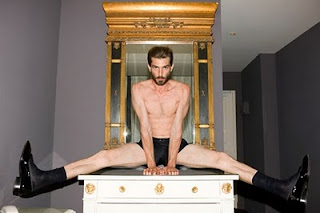 Lately, I've been seeing a lot of the following at the discount stores: Givenchy Xeryus Rouge, Arpege, Herrera for Men. Does this mean reformulation? Now that's a redundant question. What else could it indicate? Xeryus Rouge was selling for 39.99 several weeks back. It's now going for 24.99. Xeryus Rouge was one of the earlier fragrances I bought, back when I had about ten bottles and worried to a friend that maybe I had "a problem." It was raved about often online alongside YSL M7. The consensus seemed to be that M7 was better. Having spent several years with both, I prefer Rouge. It never disappoints me. To the contrary, I'm always surprised, when I revisit it, how truly good it is. Spicy but fresh, simultaneously hot and cool, Xeryus lasts and lasts--and then some. Perfumer Annick Menardo created it. Luca Turin concluded: "frustratingly close to greatness." If Beyond Paradise is greatness, I'll stay frustrated. I think this would be to a woman what Diorella is on a man. It takes that kind of woman. 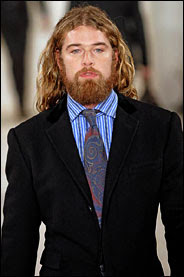 I finally caved and bought myself a bottle of Wazamba. For over a year I was undecided. I had a decant, and somehow, sometimes, with decants, I really can't tell. Some perfumes only speak their mind from a full bottle. You either risk finding out they have nothing insightful to say or you stick with keeping them down to a murmur. I'm glad I took the risk, because the things that annoyed me or worried me about Wazamba became irrelevant when I could spray it a little more freely. Wazamba isn't exactly a skin scent, and it's not by any stretch sheer--but it lays there doing the same thing all day. That's fine by me. I like a layabout, if he keeps me entertained. From a decant, Wazamba didn't stick around long. From a bottle, it settles in for the long haul. It was just waiting for me to commit.

Ladies--or is it gentleman?--Patrick Petitjean is popular. A few years ago, I posted a few pictures of him. I wrote something about what I imagined he might wear--besides sweat and yesterday's aromatic assortment of stains. I know: he doesn't really smell. Or does he? I'm not sure I care. He's a refreshing face to see in the...world?...of male modeling, if only because the thought of such a world depresses the hell out of me. Of the 600-something posts we've written here on ismell, a handful have been the most popular by a landslide. The top two? That post on Petitjean and some little throwaway thing we wrote about Tom's of Maine. For some reason, yesterday, the Petitjean post got over a thousand hits. Someone will tell me something horrible happened to him and I will feel bad for making him the source of my joke, no doubt. * 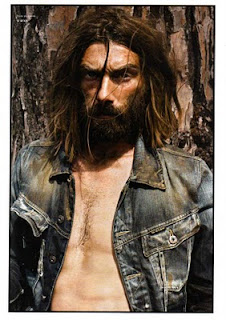 Equally fascinating yet totally unrelated: how weird are the friending patterns of people on facebook? Some people see it as a "social media" and will add you as a friend without knowing you. Me, I like this. I'm on there to meet new people, and if there's something I wish to remain private, I'm generally not broadcasting it online. If there's something I want seventy people to know but wish to keep a secret from four, I simply adjust my privacy settings. Some people, on the other hand, get oh so very touchy. Do I KNOW you, they say, responding to a friend request. No, and clearly you don't wish to know anyone you don't already. Are these people on facebook simply to share family photos with family members? Isn't that email?

The other thing I like? The whole un-friending thing. What did we do when there was no facebook and we couldn't make passive aggressive banishments amongst friends with such a perfect ratio of drama to ease? What's great is when you have a lot of friends, and someone un-friends you, but you don't notice for months, and when you do notice you think, wow, I must have really killed it for them by taking so long to notice. Then you realize that the reason they must defriend you in the first place is because it's virtually the only little mark or dent they CAN make on something as chaotic and cacophonous as facebook, and its sense of effectiveness as a gesture relies on their ability to imagine that you must be crushed. Part of the reason you're un-friended, nine out of ten, is that you forgot they exist and this is the one way they can convince themselves they're reminding you. I've been de- or un-friended by about five or six people that I know of. I'm sure I must have said something. Nice to know it registered.

There's a lot to chew here and ruminate over and then offer back something about, but here goes:

I find myself paying so much attention to smelling perfume at times...and assuming no one else pays attention at all times...that the innocuous compliment on a fragrance often strikes me like a bolt out of the blue. You LIKE? And, of course, I have a moment of ridiculous pride, as when someone compliments something about my child that really has nothing to do with me. "Why, thank you." Which I mean sincerely. Because it really was nice to hear.

I love your point about sometimes needing to just experience perfume from the bottle. And yes, you're taking a leap...like moving from dating to "in a relationship," something which I understand is a line not so much understood in a hook-up culture context, but which I assume as understandable nonetheless. I love Wazamba, by the way--a fact that I mention because finding out somebody else likes a perfume you like is another one of those nonsensical tangential sources of happiness for me, like compliment directed at my child.

I understand your Facebook approach. I think it is the only valid one other than my own. Which is, as a rule, "only if I've looked you in the eyes and shared a laugh with you. SINCE high school." Which has served me well. Though I have broken my own rule a few times, which has also served me well.

(That is IRL life; as ScentScelf, I take all comers.)

I love your title. I choose to not Google Patrick Petitjean just yet. I'm enjoying not "trending" for the moment.

ScentScelf, I'm the same way! I mean I get so thrilled when someone compliments my perfume. Then scare them away by talking about it, mistaking them for someone who cares more than a little.

Brian, I'm kind of feeling that way about my decant of Ormonde Jayne Woman -- I don't want to spray too lavishly, since it's just a little decant, but I *want* to spray *lavishly*. It's so rich at first but doesn't last that long on me. I'd need a FB to lay back on a couch Mariah Carey style and spritz at regular intervals.

I love your Beyond Paradise line. I mean seriously.

Elisa, I am still working on knowing when to let the words tumble out of my mouth and when to just be quiet. I usually get it right, but perfume and blog responses seem to be my Achilles heel...

...which brings me to open my mouth again and confess that I slipped out of the corner and into Google and learned myself some about Patrick Petijean. No news that would suggest why the sudden rash of hits...but I may look him up on Facebook and try to be his friend...

Oh my god, Elisa. "Lay back on a couch Mariah Carey style and spritz at regular intervals" is the best thing I've read in a week. Also, this is exactly what I do when watching television: I have to bring a perfume bottle or three and spritz myself luxuriously about every four minutes. It's like how other people eat snacks in front of the TV. When I had the Youth-Dew body creme I'd concentrate on covering every single inch of flesh with it, so I'd be like the girl in Goldfinger.

Brian, I totally agree that decants don't really tell the whole story. I HAVE to spritz myself all over with something in order to get to know it, or, in the case of extraits, dab myself continuously for about half an hour in order to achieve a satisfactory bio-dome of fragrance. Unlike many, I have no problem with blind buys and in fact usually find them to be a THRILL. I would never be able to wait for a tiny decant from Perfumed Court, carefully judge the fragrance, then order it from somewhere else. I like seeing something on the shelf, saying "I WANT THAT!", and paying more than it's probably worth, just so I can have the thrill of exiting the store and IMMEDIATELY undoing the shrinkwrap and spraying myself. At those discount stores you can't test most things, and my research usually doesn't lead me astray. Anddd if I don't like it after a few months I give it away or swap it or something.

Oh, me too with the blind buys! Some of my biggest triumphs were blind buys. I'm more hesitant than I used to be, having got a few duds, but they eventually went to good homes. That first spray is a thrill indeed, and the only kind of thrill I really go for, being so risk-averse I won't even ice-skate.

I'll never forget the first time I hit a perfume counter at Marshall's, and went home with DK Gold, Badgley Mischka, and Tea Rose, then sat on the floor and sniffed them all for the first time. That was a great day.