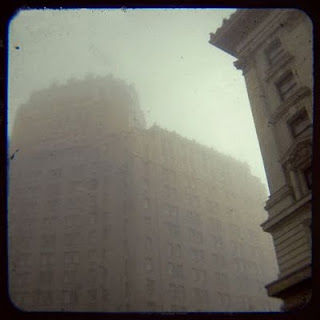 From A Single Man (1964) by Christopher Isherwood:
"It would be amusing, George thinks, to sneak into that apartment building at night, just before the tenants moved in, and spray all the walls of all the rooms with a specially prepared odorant which would scarcely be noticeable at first but which would gradually grow in strength until it reeked like rotting corpses. They would try to get rid of it with every deodorant known to science, but in vain; and when they had finally, in desperation, ripped out the plaster and woodwork, they would find that the girders themselves were stinking. They would abandon the place as the Khmers did Angkor; but its stink would grow and grow until you could smell it clear up the coast to Malibu. So at last the entire structure would have to be taken apart by workers in gas masks and ground to powder and dumped far out into the ocean."
Posted by Brian at 1/05/2011 04:23:00 PM

Brian - thank you for this! It made my day! The perfect quote and the perfect perfume to illustrate it! I'll be wiping Earl Grey out of my laptop for hours...;)

I think the deceased rat under our floor already thought this was a great idea. The bas**rd obviously thinks taking up carpets , moving furniture etc is hilarious. We could move , start a new civilisation but the little sh**ts follow. Maybe Etat fragrances havn't thought of this one yet . It would be great then I could say "oh it's my new fragrance , so chic don't you think ?" instead of "whoa there goes the wiff sorry it's wind direction ".

This is great, Brian. Probably the men wearing gas masks would even feel it is getting inside their bodies from a strange natural happening. Science fiction on the go :D

Have a great day!