This Week at the Perfume Counter: Omaha 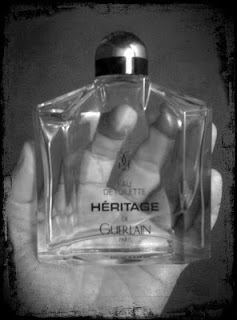 This Christmas, I puchased Guerlain Homme as a present for my father, thinking it would be a good everyday scent for a guy who probably doesn't have many and tends to play it safe. I guess I have no memory, and simply put early indications of his apparently intrinsic sophistication out of my mind temporarily. Entering his bathroom, I saw a 4.2 ounce bottle of Guerlain Heritage on the counter. It was half empty. I smelled what seemed like natural musks in it, so I assume it dates back to the time of the fragrance's release.

Seeing it there brought back childhood memories of my father's previous colognes. He never seemed to have more than one at a time--my father is a deeply pragmatic person when it comes to finances and possessions--but he did have, at some point, Aramis and Aramis 900. I remember his long dressing room, with its full-length mirror and the double sinks, which always smelled of one or the other. My dad used splash bottles. My aunt tells me she remembers him wearing Old Spice as a very young man, so maybe he picked up the habit there. His Heritage is also a splash.

I remember watching as he poured Aramis or Aramis 900 into his hands and slapped the stuff on his face and neck. I can remember hearing the sounds from the other room, too, followed by a waft of the rich aroma as it made its way around the corner, from his room to mine. With the audacity children--even adult children--display toward their parents, I believed I was expanding my dad's horizons by bringing him Guerlain Homme. As if to drive the irony home, he gave me the Heritage, a gift from father to son which made nice play of its name, and I sat it on the dresser next to the bottle of Aziyade I'd packed for the trip. As the weekend progressed, other bottles crowded around it. They all looked fairly insignificant alongside the Heritage, but the company classed them up a bit.

I'd googled Omaha Perfume before my arrival. The only thing that came up was a place called "Perfume Palace", which sounded promising but was, I assumed, probably massive overstatement as well. Christmas Eve, my friends and I went to the mall a few streets down from my dad's house, where Google located Perfume Palace on the map.

Despite the directions, it took me forever to find my destination. It wasn't where the mall directory said it would be, and the place was so congested and cacophonous with screaming teens I couldn't hear myself think--nor could I see much above the sea of their bobbing heads. It reminded me of the part in Being John Malkovich where an office floor, which is half a floor, is sort of impossible to find, until the characters get their minds out of the way and stop consciously looking for it. Sure enough, when I gave up, there the Perfume Palace was, right in front of me.

The young Indian man who operated the place--something between kiosk and store front, with jumbled shelves and cases and little room for clientele to maneuver the length of the space--was tightly wound. Like the guy who operates the shooting gallery at a carnival, he ran back and forth at a furious pace, his arms constantly pulling things from shelves to shove into people's hands. The store was a mess--not just in temporary disarray but fundamentally disorganized. Anything that read cologne had been placed on the men's side: even Shalimar and Poison. On the women's side, I found Guerlain Habit Rouge, among other misplaced items. 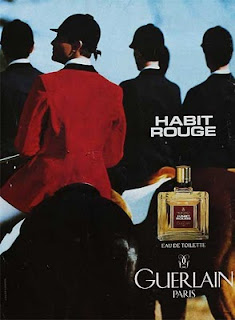 Perfume Palace was vastly less than palatial, but I did find a lot there. The Habit Rouge dates from the eighties and I snagged two bottles. I felt I had no choice. The Habit Rouge I own at home is a weak thing by comparison, like a badly scanned image of the original. I hadn't even realized that they'd officially re-formulated the stuff. Later, I saw that, according to Fragrantica, at least, Guerlain "re-orchestrated" it in 2003. It's hard to explain the difference without simply resorting to the word weak. The newer stuff has a piquancy up top which recalls the vintage, but not much at the bottom. If it were a vase it would quickly fall over. You open the old stuff and, as with Heritage, the full, musky force of good old Guerlinade hits you: that creamy vanilla skank.

I found an older bottle of Youth Dew EDP, which smells almost identical to the newer stuff I have but comes in a rubberized vintage bottle with period lettering on the front. I found Havana for women, a fragrance I'll review at some point in more detail but which, in short, resembles a certain kind of eighties vanilla floral (see also Balenciaga Cristobal, for instance). I found an interesting old-version Avon number called Imari, a rose chypre with enough civet in it to attract half the cats in the neighborhood. "You like the French stuff," the clerk said, trying to chat me up. I didn't bother explaining that Avon is distinctly American, just as I'd given up trying to convince him that everything with "cologne" on the box wasn't necessarily intended for men. Also on the shelves: Rochas Moustache, Bel Ami in the old rounded cocktail shaker-shaped bottle, Caron Pour un Homme, Diorella, and Cristobal pour Homme. 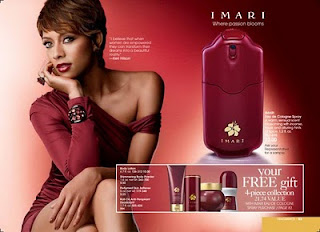 Von Maur department stores are a primarily Midwestern phenomenon, but they only hit Omaha within the last several decades. The department store of record when I was a child was Yonkers. That one still exists, but sits somewhere between JC Penny and Macy's on the shopping experience continuum. Von Maur is closer to Nordstrom. Lucky for me, the store was discontinuing its Cartier fragrances. All stock was half off the original price. This put Declaration Essence at forty or so bucks, a steal for an already priceless fragrance. Much of the stock was older. I believe this Von Maur location has been open for a good ten to fifteen years, and some of the half off stock had been sitting there that long, from the looks of it. I picked up an older version of Must in parfum extrait.

Von Maur carries Neil Morris, as well. I'd smelled quite a few of these things in the past but only from little spray testers. It was great to see the bottles in their natural habitat, all set out on a tray. Aegean and Afire were my favorites of the seven available Morris fragrances. Afire is orange-flavored frankincense with vanilla, berries, caramel and something slightly woodsy. There's a tangy waxen quality to Afire that I like more than I thought I would at first sniff. There's also something truly fiery about it, a warmth which reminds of the hearth and the holidays. It has good persistence and respectable sillage. Aegean is the lovelier of the two. It's one of the loveliest things I smelled the entire trip, in fact. It doesn't have the staying power of Afire, but it's a wonder while it lasts. It reminds me a bit of Shalimar, with its citrus opening, lime and mandarin in place of lemon. Lavender and basil give it an interesting aromatic angle. It's truly something.

Von Maur also carries Natori. I'd smelled it over the course of the last year at Saks, but I'd never sprayed it on skin, and Natori is one of those you must smell developing on the body. It has the drama and hallmarks of older rose chypre fragrances like La Perla and Aromatics Elixir, but also some quality which makes it feel much more contemporary. On paper, it can feel a bit shallow. On skin, it lasts well, going through various stages of development. Marina at Perfume-Smellin' Things detailed these stages nicely. It seems to morph in and out, always deceptively tenacious but focusing on different things, so that you think it might be fading. Really, it's switching gears. For a while I felt the amazing bottle was another example of substance-less packaging. Now I know the fragrance and the bottle do each other justice.
Posted by Brian at 1/01/2011 02:36:00 PM

So true about Natori. On paper it hardly smells like anything.

I used to wear Imari a lot back in the day - didn't realise it had civet in it - no wonder I liked it.

I love it when I find a store like that in an obscure location.....like Omaha! - sounds like you treated yourself to a some post-Christmas gifts??? (I know , I know....it's "research" for your blog.....heehee)

Did you smell the Bel Ami? Was it "vintage"? (what constitutes the word "vintage", by the way? 30 years? 40 years?) I used to mix Bel Ami and Body Shoppe's White Musk (oil) when I was in college - our old apartment in Seattle smelled like a well-worn saddle doused in musky baby powder.....I thought it was chic, at least.

Now you've got me going about Natori. It's one of those perfumes I keep dancing around but never trying. Sounds interesting. Love the story about your father!

How lucky you are !!
In France, you can't find discontinued or old perfumes in a store . The brands take the items back when they stop a product and a shop must have a special authorization of the brands to sell their products. You will never find a place like the Perfume Palace. From time to time, if you are very lucky you can find an old bottle in a flea market. And no hope to buy something old on eBay, because LVMH has forbidden that in France, for Guerlain or Dior by example.
By many ways, it's outside the Country of the Perfume that you can enjoy its treasures.

Dude, you find the best places. I know you weren't necessarily expecting that in Omaha, but still...Russian kiosks in the south, magically apparating Perfume Palaces in the north...not too shabby.

Big City life seems to lessen the chances of that, for some reason, though I am on a mission in 2011 to prove myself wrong. Meanwhile, we do have that oddity in retail, a Von Maur...the store that does no publicity, that runs a crazy markdown scheme, that carries...WAIT! Your Von Maur has Neil Morris??? How do you get that to happen? The most unusual scent my Von Maur had was Marjorie Midgarden's Summersent, and that disappeared from the shelves over a year ago. I did see Natori there...I will have to try it on skin, as I had the same paper experience. In fact, I don't know why I bother with paper experiences, as they are just that. I should call them "paper screenings."

As for your father, the mirror, his cologne, our child-based overlays and interpretations...and the ritual of application...

...I'm just wandering about in that world for a little bit; something about pondering it from various angles of reflection in the mirror, and the distinct sound of hand upon face as the fragrance is not quite but seemingly slapped on...of the stories we spin as observers...of the slap of reality that comes when we realize no matter how intimate, we are observers...and the converse, that some circumstances present as merely observational, but end up as intimate as human interaction allows...

Anyway, splash bottle = slap bottle when it comes to men. Such is how my brain sorts that. Heritage is wonderful (as is old Habit Rouge), and I wish I knew a guy who used it (them). Aramis, otoh, I know, and it will forever be enmeshed with the first person with whom I became seriously entangled.

Did I mention I should confess to coveting the Diorella?

Did I thank you for letting me go on with no center?