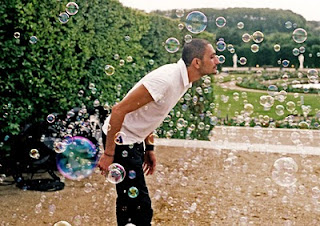 I wasn't a major fan of the earliest offerings from Maison Kurkdjian. I liked them. I didn't love them with a 175 dollar passion. I didn't love them as much as the big-bosomed SA at Saks, who seemed to have taken some manager's admonition to sell "racks" a little too literally. Even her effervescent, busty personality couldn't persuade me to shell out for the scented bubbles Kurkdjian had on display. Like many people, I think bubbles are a nifty idea. I've blown my share of them. Some of the novelty wears off when you price them as luxury items.

I've been waiting for a Kurkdjian I can really get behind. I knew it would show up eventually. Absolue Pour le Soir is one of those fragrances I'm a total sucker for.
A little smoke, some incense, some animalics. Foot on the pedal. It's a bit in the brutalist style. In some ways, it reminds me of several other personal favorites, each equally remorseless: Le Labo's Patchouli 24 and Oud 27; Mona di Orio's Cuir. It even reminds me a bit of the generally inimitable Incense by Norma Kamali.

The honey in Absolue operates somewhat similarly to the honey in Serge Lutens' Miel de Bois: bitter and acrid rather than sweet. Absolue doesn't go quite the distance that Miel does in that direction, but it most definitely walks a line. Add to this a cumin note and you've got the kind of sucker punch smell that some will love and some will loathe, each with impressive fervency.

The combination of notes is interesting in that the sum total seems geared toward a destination that most fragrances try to avoid. Cumin is enough to send some running in a perfume. Cedar and sandalwood are nothing to run from, but in concert with Absolue's honey and cumin they seem just the slightest bit mercenary. They're not at all concerned here with keeping a low profile, or playing up their finer points. Rose is the real back seat in Absolue; felt without exactly being heard. I'm not sure you would ever pick it out in the line up. I smell it most at the beginning, hovering behind the major players. But you sense its softness there, throughout the fragrance's development, and moving along on the current of all these other savory aromas, it impresses you with a beautiful, ghostly dry presence. The vanilla influence of benzoin is salty rather than sweet.

Savory is probably a good overall word for Absolue Pour le Soir. It does smell a bit foody, but not necessarily anything you'd be tempted to eat. I wonder how this would work on a woman. Absolue is wonderfully animalic, but it isn't the powerhouse that others of this ilk can be. I can't imagine this taking a room hostage. For all the pomp of its notes, the fragrance is a pretty mellow thing, persistent but fairly ambient. I wouldn't call it a skin scent. But I wouldn't call it a shouter. It reminds me very much of a variation on Kouros. It lasts very well.
Posted by Brian at 1/21/2011 06:29:00 PM

Right that's it as Dimitri commented recently I'll have to sell a Kidney. I broke the bank on my daughter yesterday ( boy did that hurt) . I even promised I would not "sin" again for a while .I am dear Lord a hopeless sinner. I don't suppose 10% of my liver or how about a spleen my father lived for forty years without his .Jeff dearest how would you like to help Childless couples ?

Boy, this one walks a line, indeed. Panty cumin, big time. An approach to perfume that general Just Doesn't Interest Me, because, in addition to thinking it is just, well, wrong, I'm wondering "I pay for this why?" Interesting, though, that I kept coming back...and on the fourth (yeah, we'll examine that later) wearing, the cumin settled down very quickly and then I was left with this luscious, yes somewhat foody (but not really, right?), wonderfully plush near extravagance. Near extravagance because in the end, unlike many a Chanel, it is rich but always approachable.

Let's just say I stayed planted on the couch, glad I had already gathered my reading material, because I was really enjoying my own waft. And huff.

So, thought cumin is generally one to send me running the other way, I learned to love--REALLY love--it here. I hadn't thought about the honey, but I think you've hit it spot on. Blast. You'll have to excuse me; I think I'm gonna take another hit of that stuff.

Thanks for this review. Like you, I've been relatively unimpressed with Kurkdjian's lineup so far, but this one blew me away - I love it!

The first time I smelled the MFK line, nothing really grabbed my attention, and I just forgot about. Then, the past couple of weeks, I keep seeing this fragrance being mentioned in the comments. Yet, what really pushes me over the edge (and leads me to place that sample order) is your mention of Kouros, one of the most impressive fragrances!

Victoria, it took me a while to make the connection, but Kouros and Absolue share many qualities, I think. It's that splendidly acrid honey thing.

AplS was strange on me. First wearing, all I smelled was the sweetness of the honey, no skank whatsoever. Second wearing it was ALL skank! Like the civet in Jicky EDP. I gave my sample away. Me and skank don't get along very well. At least that sort of skank. I like Dzing!, which some say has that barnyard vibe, but it's not as offensive to me...

Great write-up. Further confirmation that this scent may need to become a permanent fixture in my wardrobe; love the warm-and-sweaty stuff.
Cheers,
Michael