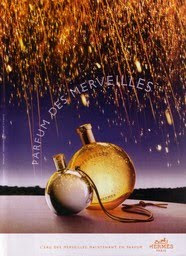 Hermès launched Eau des Merveilles in 2004. For years I have loved, or I should say I thought I loved Eau des Merveilles, but this was in theory. The truth is, I never, ever (ever!) wear the stuff. Honestly, all this time I thought I loved EdM but what I enjoy is the idea of it, not wearing it. The thing is, I still think Eau des Merveilles is wonderfully original and phenomenal in its ability to capture the sensation of a day at the beach. It is such an amazing rendition of ambergris; I literally feel as if I’ve been at the beach all day, slightly salty, sweaty, earthy smelling skin. My hair and bathing suit filled with bits of sand. You know that feeling when you’ve sunned and funned all day and you’re sleepy and content on the drive home but the thing you want to do most in the whole world is take a shower? I mean walk in the door and get into a shower pronto? This is why I never wear Eau des Merveilles; it makes me feel gritty and dirty and salty and I Really want to wash the stuff off ASAP. So, for several years, when I’ve had the desire to wear Eau des Merveilles, I have actually worn Elixir des Merveilles instead. Elixir is sweeter and basically a gourmand version of EdM and manages to wear like a perfume on me instead of gritty, salty, screaming-to-be-bathed skin. Maybe there’s a bit childhood pathology in my desire to wash EdM off immediately. When I was a little kid, my grandmother would take me to the beach and we would stay All Day – I mean from 9AM to sundown. By the end of the day I wanted to be home and clean so bad I could have cried. Plus, you might imagine I suffered a good deal of sunburns from these all day outings, which I usually made worse with the application of baby oil (it was late 70's-early 80’s, we didn’t know about skin cancer yet).


Parfum des Merveilles came out in 2005 and somehow I never managed to try it until now. Parfum des Merveilles (PdM) has notes of oak, patchouli, mosses, amber, balsam of Peru, tears of Siam, davana, cognac note, leaves and roots. As you would expect, Parfum des Merveilles is a denser, more concentrated fragrance than EdM. It retains the citrus top notes but tones down the salt and grittiness and increases the woods and amber. PdM is earthier with noticeably more patchouli and overall I find PdM to be smoother and more balanced. PdM wears like a perfume on me instead of a strange icky all-day-at –the-beach sensation that I just want removed as soon as possible. The cognac note gives it a deeper boozy sweetness, while not as sweet as Elixir, it is sweeter than EdM.

Parfum des Merveilles is very much worth trying if you want a smoother and less gritty version of the original, but you need to either already like EdM or like me, think you like the original Eau des Merveilles for it to have a chance at becoming an addition to your wardrobe.
Posted by Abigail at 2/19/2011 08:07:00 PM

I wear Elixir as well, and I don't think I tried the original Eau de M.
But I do remember my childhood summers at the seaside during the 80s when each summer I had sunburns (due to the same reason as you). And it didn't help that I have very light skin so everyone around me was pretty much ok while I suffered.
Anyway, the parfum sounds very good and I will give a try as soon as I find a way of acquiring a sample.

I can't deal with all-day-long beach trips either -- I'm quite pale and I always get burnt on those occasions, no matter how many times I reapply sunscreen. You always miss some spot or another, and my scalp always gets fried since the sun goes right through my blond hair. Not worth it!

I like L de LL for a gourmand version of a suntan lotion scent.

Your writing about long days on the beach is wonderful. I spent many, as a child, in Florida and as an adult in California. That shower, cold rinse, white clothing...ahhh.

As for Eau de M. I had a sample, wore it, thought it was interesting, but it didn't last long. One of these days I'll try the parfum.

I miss the tans.

I love the original EdM, I just wish it lasted longer on me! To me, it has all that you describe but without the feeling of needing a shower to freshen up & get the grittiness gone!

I also love Elixir, it's just beautiful, and does make up for the Eau not lasting as well.

'Aint Nobody can render me helplessly-curious about a scent like you! WOW, your review makes me at Least want to smell this if not wear it ha!

Presently indulging in my 'transitional' fig fragrance (sorry if you're still in the snow - it's a balmy 74 here, yikes) I got from Posh after reading your description - Miller Harris Figue Amere. & I'm HOOKED.

I bring it up 'cuz it has a slightly sweaty/salty element, a little bitter or acrid maybe, that makes it so 'Real', like I've actually been on a fig-tree'd Mediterranean shore-cliff absorbing the fig-salt wind all day. Oh. I'm WAY digging this. :)

Your post made me imagine how this idea could go Totally overboard in a perfume though and actually create that end-of-day-sunburned-PLEASE-let-me-shower feeling. (Like others who've commented, 'been there' - & I'm a fair-skineed redhead - burned beach memories abound) :)