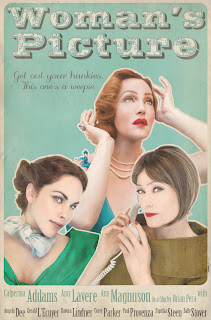 Several months ago, I posted about Patou 1000, offering a bottle giveaway.  I asked you to leave comments relating your earliest memories of fragrance and the people you remember wearing it.  The comments were some of the most interesting and touching I've read online.  Each one zeroed in on deeply personal stuff, relating perfume directly to memory and the primal stuff of childhood.

Since then, I've started a page on Facebook for a film I'm completing called WOMAN'S PICTURE.  With your permission, I'd like to post some of those comments on the page, opening up the conversation to a wider group of readers.  Feel free to like the page or drop in to say hi.  I won't go into too much detail about the film here.  The Facebook page spells most of it out.  I will say it focuses on perfume and memory and strong female characters who are based in one way or another--or many--on the women I remember from my childhood.  I chose Valentine's Day to announce the project because I consider this film an extended valentine to people I loved very much and miss seeing in the world.

WOMAN'S PICTURE is in post production and will be screening over the next year or two, at festivals first, then elsewhere.  We'll have a trailer up soon, as well as some perfume-related shorts and projects, on a website which will be launched around mid March or early April.  I'd love to see you all there.

Oh, Brian, what an interesting project; I will definitely be dropping by on Facebook to learn more about it. Best wishes for success with it!

Thanks, Queen. See you there.

Congrats! I can't wait to see it.

I can't wait to show it to you, Elisa. Hopefully it will play in Boston and we could meet for a little perfume shopping beforehand. We could make the movie a truly sniff and see experience. have you been wearing any of those perfumes? How are you liking Mauboussin?

I've been waiting for more information about this film, after reading what you've talked about. see ya at FB.

I'd follow if I weren't involved in FB; the english side especially is quite invasive. But I do want to see more info about the film, posted here or mailed to us. I'm looking forward to seeing what you have done with it!

That's fascinating! I just popped over there & 'liked' it. I will be watching developments with interest.

btw brian, I don't know why, but the site is loading awfully sloooooowwwwwllllyyyyy for me lately...

How exciting! If it plays in the SF Bay Area, let me know as there is quite the group of perfumistas here.

And you have my permission to use my comment. I believe it was about the mysterious perfume my mother's friend wore. Recently I smelled non-vintage Vol de Nuit and I started to think that--the vintage form--might be the one. Got to find some vintage now--at least to sniff.

Also, I recently wrote a Brian-inspired non-fiction piece about my complicated relationship with mother regarding perfume. If you'd like to read it, let me know.

Oh, and Boston? Boston? Did you say Boston? Don't want to crash the party, but if you're doing some sniffin' and watching this movie, well hey, I'd love to join you. I'm a 2-hour train ride north. ;-)

Oh wow Brian, this is TOO Exciting!! I'm ever on the hunt for off-the-beaten path indie cinema & you're one of my fave writers, & -like so many others- perfume is the soundtrack of my life, so I simply Must find a way to see this :) Can't WAit to see what you've done with this Gorgeous concept! & *SALUTE* ~ you gotta be SO Proud! :)