Scent and Sexuality in the Seventies

In case you haven't read it, there's a wonderful meditation over on Perfume Shrine about Anais Anais, the iconic perfume by Cacharel.  Writing about Anais Anais several years ago, I appreciated its ad campaigns (old and new) but commented that the fragrance was pretty free of childhood associations for me.  Reading the Shrine article, which features information on Sarah Moon, the photographer of the fragrance's original look, all sorts of impressions came surging back, and I realized Anais Anais made more of an impression than I'd allowed for.   In concert with other social trends and currents of the time, it practically art-directed the era.

I was about ten years old when Anais Anais came out, and this very specific soft focus look was everywhere.  It was a sort of 1970s re-imagining of erotica popular in the twenties, the kind of images you'd see on forbidden postcards.  Women at their vanities, gauzy daylight filtering through lace curtains, eyelet-ridden blouses, crocheted shawls, long hair gathered in loose buns, off the shoulder lingerie, water basins and pitchers on antique wooden washstands, cascading ferns, heavy rouge and big doe eyes, canopy beds.  Reading the article on Shrine synchronized all these images from my childhood in Texas, and I was reminded how pervasively a Trifecta like fashion, film and fragrance could take over culture back then, before the internet, the cell phone, and the Twitter account shifted and dispersed the information landscape.


Pretty Baby came out the year that Anais Anais did, in 1978.  The movie was a scandal.  It featured an adolescent Brooke Shields (probably about 12 years old at the time) as a child prostitute in a New Orleans brothel, circa 1917.  Susan Sarandon performed alongside Brooke in the film, which was directed by Louis Malle, her lover at the time;  she appeared topless in Pretty Baby in a very casual, matter-of-fact way.  You can feel the influence of vintage erotica in that film and its poster art.  Perfume Shrine references the work of writer Anais Nin as a likely source of inspiration for the Cacharel fragrance, and that makes sense, as there was renewed interest in Nin's work at the time of the perfume's release.  Nin's writing, like Colette's, explored feminine sexuality from a woman's perspective, and she was embraced by the feminist movement of the 70s.  She died the year before Pretty Baby and Anais Anais were released, and much of her most erotic material was published posthumously.  You see the influence of her work in both of these cultural touchstones.

Several years later, Brook Shields posed for Calvin Klein ads, which depicted her against a blank background, hair blowing, shirt slightly open, her body laid across the screen.  "Nothing comes between me and my Calvins," she said, and that about did it for the moral majority, who totally flipped out over this molestation of adolescent purity.  It was one thing to show women dressed like girls, lounging around in boudoirs which resembled bordellos.  It was another to insert a real girl into that scenario, rouging her cheeks in a parody of adulthood.  Worse still, the Calvin Klein ads removed the soft focus, quaintly vintage trappings of the fantasy altogether, depicting childhood sexuality front and center. 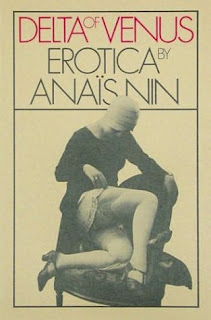 The tinted look of old erotica continued on for a while, most notably for me in the film Cannery Row, a Debra Winger, Nick Nolte romance based on a John Steinbeck story, also a period piece, also set in a brothel, but it took on slightly different shadings: Winger, though adult, had the guilelessness of a young girl, making her a rather inept hooker and totally irresistible to men. You can see a shift in this strain of cultural preoccupation with girlhood sexuality in Cacharel's fragrance LouLou, as well, which was also inspired in part by twenties iconography and premature adolescence and came out about a decade later, in 1987.  "Inspired by Louise Brooks in the movie Lulu, Loulou has the troubling, seductive character of a naive girl who is half woman, half child," said the marketing copy.  "Compared to Anais Anais's innocence, Loulou is aware of its powers of seduction, and many a young woman relates to the feeling."  The bottle for Loulou wouldn't look out of place in the rooms photographed by Sarah Moon for the Anais Anais ads.  Anais Nin's posthumous work was just making it into the public sphere, in "unexpurgated" form, starting in 1985.  It's clear that Anais Anais and Loulou are speaking different dialects of the same language, and Anais Nin wrote the book on it.


The look of this moment permeated everything in my suburban upbringing, from clothing stores at the mall to the macrame plant hangers in our den, but it took root nowhere more insidiously and exhaustively than my sister's bedroom, with its calico bedspread and matching canopy, the acrylic sheers over the windows, the clothes in her closet, and all the little knick-knacks on her dresser and nightstand.  The feel of this moment was everywhere too, and it was an uneasy one.  You couldn't go anywhere in my neighborhood without being faced with those weird undercurrents of sexualized adolescence.  You couldn't just be a kid.  Girls were tarted up in a way that commanded the attention, and your scrutinizing gaze was then in turn scrutinized; you were encouraged to look and to feel titillated, then you were promptly shamed for it, whether the shame was self-induced or culturally imposed.

Fascination with young sexuality has been a given of every era, but this 70s version felt specific to its moment in time.  I wonder what that says about the 70s.  We were a fantastically paranoid culture then: Watergate, assassinations, energy crisis, et al.  This increasing sense of disillusion collided with a new permissiveness, carried over from the sixties, which had taken a while to shake the inhibitions of the decade prior.  It's as if we wanted our freedoms but with the innocence of children.  I wonder what that meant for those of us who, at the time, were in fact real kids.  I'm interested in hearing from people around my age who grew up in the seventies.  Remember any of this stuff?

Here's a video I found in which Sarah Moon talks about her work and her perspective.  It's a wonderful glimpse into her creative process and thinking.  Pirelli started publishing its high end "girly" calendars in 1964 and stopped, for a ten year period, in 1974, several years prior to the release on Anais Anais.  The calendars were highly influential and each featured the photography of one artist exclusively each year.  The 1972 calendar was devoted to the work of Sarah Moon.

Brian, your point of view is interesting. in our side of the frontier the experience of David Hamiltonesque candeur, was an expression of our still catholic aura of scrupulous and stillborn sexuality of the 70'S...
there is a faux innocence in this aesthetic. As if the liberated women were feared, thus the candid teen with her fragile self-image is way less offensive for men.
today this motif would be passé, girls' are GURRRRLZ now, or one would have to go into primitive zones to express it.

I agree totally. I was always uncomfortable with this sort of imagery and its heightened view or presentation of childlike sexuality as a kid myself. It was everywhere, and had an uncomfortable premature sophistication to it. I guess my question is what made it so appealing, not just to men but to women, because these products were marketed to women. I forgot about David Hamilton!

yes, when a teen i was given a bottle of Anais Anais. I was then well aware of my blooming feminity but not articulated enough to ever express it affirmatively.
My understanding of the attractiveness of Sarah Moon pictures and the likes is that educated women, mastering their sexuality and inconscious mind new well of the seductive power of innocence. Susan Sarandon image melted into Brooke Shield's, everything's blurred. There's a lot of exploration as well as refined innuendos in this. Thank you for letting me comment in your article ^_^

But of course. What's a blog without some conversation. Thanks for contributing your thoughts.

Oh, I LOVE this post, being possibly more obsessed with perfume ad campaigns than perfume itself, and especially since I've recently been so into those Brooke Shields ads- I'm thrilled you mentioned them. The connection of Anais Anais to Pretty Baby seems so obvious now, but it hadn't occurred to me before. The kiddie porn ads of the late 70's are at their worst in those horrifying Love's Baby Soft ads with the girl holding, I think, a lollipop and a stuffed bear, again with the heavily rouged cheeks. I was so shocked by Pretty Baby when I watched it- it caused a minor scandal in the seventies but think of what it would do NOW? The Adrian Lyne Lolita got into hot water merely for showing a body double rolling around on a bed! It's unbelievable what they got away with in the seventies- The Exorcist is further proof of that, something that would never in a million years get made today.

Anais Anais was actually the second perfume I bought myself. I liked it a lot but didn't wear it much so I gave it away. I probably need another bottle soon, though I will eternally regret not buying those three bottles of the mythical EDP concentration when I saw them in an outlet store.

Yeah I hadn't thought of the connection between Pretty Baby and Anais either until I saw all the Sarah Moon photos laid out at Perfume Shrine. Then I remembered how Brooke was at the hot pink center of it all. Endless Love was a part of the soft focus trajectory too. Remember that one? High School boy pursuing 15 year old girl. I need to revisit it. Hard to believe that came out before the CK ad. And yet it was a big scandal, too. For a while, everything Brooke Shields did was a big scandal.

And childhood, at least in my neighborhood and in Houston in particular, was a really weird, loaded proposition. I realized recently that children had gone missing in the area we lived in right around this time. Dean Corll died in 1973, and Pretty Baby was 1978. Several of the boys he kidnapped came from my neighborhood. It's something adults never discussed. John Wayne Gacy was active from around 73-78. And in my neighborhood, you always heard reports of missing children. So now as an adult I realize why everyone was so WEIRD but at the time it was just this unbearable sexualized tension full of equal parts shame and titillation.

Oh and Love's Baby Soft. Yes! Totally forgot about that. And Lip Smackers.

Oh my goodness Sarah Moon , there is a name from my past. Everyone had Biba posters by her. No wonder the picture had a familiar style.

Thanks for this. That ad came out when I was 12. It seemed to say "nubile" to me at the time and set the tone on how tight are jeans should be. But my perspective was from one slightly younger than Brooke.I also received the Anais Anais perfume as a gift a few years later. Interesting that you made all these connections. I also agree with Violane's insight. Seduce me, I'm innocent.