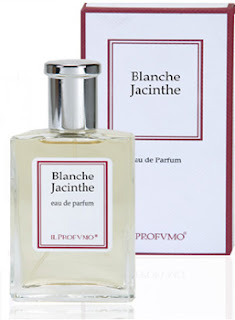 “opens with celestial notes, given by the preponderance of the white and intense water hyacinth, which appears also in the heart of this perfume, in a very deep and sensual way. This alchemy is completed by orange flowers and jasmine. It closes with a trail of amber and musky notes.”

Announcement of Blanche Jacinthe on NST last year added galbanum and chamomile as additional notes. Obviously the ad copy is a bit lacking here so I’ll sum up the notes list in my own words with what I actually smell: water hyacinth (or insert hyacinth, lotus and/or water lily here), galbanum, chamomile, orange blossom, jasmine, and white musks.

Blanche Jacinthe (which I normally would shorten to BJ but you might imagine why I will not) reminds me enough of other hyacinth focused fragrances for me to group it into the same category with Annick Goutal Grand Amour, Guerlain Chamade and Parfums MDCI Un Coeur en Mai. However, Blanche Jacinthe also reminds strongly of Byredo La Tulipe with its soft green vegetal “freshly cut stems” quality. 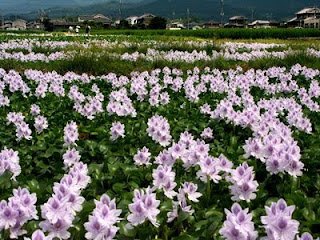 With a little snooping around, it turns out water hyacinth are a completely different plant from regular hyacinth. Water hyacinths are destructively invasive plants, considered ‘pests’ of the plant world but work nicely when used to make wicker (rattan type) furniture. Who knew? Well, we do now. I confess to not having any idea what water hyacinth smells like and am guessing il Profumo mean to convey that Blanche Jacinthe contains a watery, aqueous smelling hyacinth note, hence “water hyacinth” as opposed to generic hyacinth. From what I am smelling it wouldn’t be a stretch to suggest that the idea of lotus flowers or water lily is evident in this lovely little number as well. If anyone has actually smelled water hyacinth and knows that the scent differs greatly from regular hyacinth just let me know.

This article at NST is incredibly helpful and bears repeating given the list of notes in Blanche Jacinthe. The “notes” listed for a perfume are not an ingredients list. The notes are purely marketing or advertising copy. The list of notes is meant to convey how the overall fragrance smells but it by no means suggests that, in this particular instance, essential oil (or synthetic essence) of water hyacinth is used.

Normally I am quite the chypre, oriental and floriental lover but this year I’m having a field day with springy, pretty, girly white florals. Blanche Jacinthe could easily be dismissed as especially fresh, clean, watery and one-dimensional. I would only encourage sampling of Blanche Jacinthe if you are an avid hyacinth fan or perhaps tried La Tulipe this year and fell for its charms.

I am pleasantly surprised by Blanche Jacinthe and can easily say it’s one of my best unsniffed purchases so far this year.

A note about edp vs. parfum: I’m finding the parfum to be a tad greener and the additional notes of galbanum and chamomile seem most obvious in parfum concentration.

I'm a huge fan of the Byredo and Un Coeur en Mai-- so this sounds lovely.

I don't see it sold anywhere anymore. Is it on Luckyscent?

Have you tried the Songe de Tulipe in this line?

Sounds lovely. I have a love/hate thing going with hyacinth. I associate it with spring and Easter, and want to wear it then, but some of the hyacinth scents I've tried end up too spicy or sour. I'll have to try this.

This does sound, very nice.