Perfumes by The Creators of Le Labo 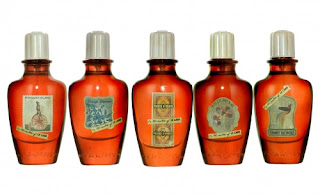 What to call these five fragrances, whose labels simply read "by the creators of Le Labo", as if that were all you need to know? Available exclusively at Anthropologie stores, the scents range from straight up floral musk to woody-spicy. They retail for 62 bucks and come in identical brown 2 ounce bottles. Of the five, I like two a lot. One I like okay. The remaining two leave me cold. They are intended to evoke "a nostalgia for the perfumes of the past," a statement about as vague and multi-purpose as the nondescript packaging itself, more tone than substance.

I appreciate this partnership between Anthropologie and Le Labo, which seems like a smart move for both. People who haven't heard of Le Labo might seek the line out after smelling these. The design and packaging relate interestingly to the Anthologie sensibility, the bottles sitting on the store's shelves as if they materialized from some little pocket of that very specific commercial universe. At the same time, they feel remarkably consistent with Le Labo's own aesthetic. The one central weakness in this vision, for me, is the refusal to give this spin-off brand an evocative name, let alone any name at all. A few distinguishing physical characteristics would be swell, too.

The perfumes themselves, of course, have titles. Poudre D'Orient and Belle Du Soir are my favorites. Both remind me of qualities I like about Le Labo--a weird sort of spiced muskiness which can somehow feel unfinished but here, in light of the packaging and the strange anonymity of the presentation, feels just right, simple and straightforward. All the same, I wish I knew who the perfumers behind these are, and why "the creators of Le Labo" opted not to make them known in the press materials. It matters to me, I realize, because I like making the connections between creative work. Yes, I understand, perfumes are made for commerce, according to briefs which reflect a bottom line. That doesn't exclude them from finding their way to art the way rock bands, filmmakers, and other commercial artists manage to do. I might buy a CD without knowing anything about the band. It's happened before. But I would get pretty frustrated if I liked it and wasn't able to find anything else they'd done.

I could swear Poudre D'Orient is by Daphne Bugey. It reminds me of her Rose 31 for Le Labo, and of Kenzo Amour. It features a musky aspect which is almost tactile somehow. Poudre is like a lipstick musk. It lasts well and is moderately diffusive. It smells a bit of carrot seed oil, too. What's especially nice about the lipstick note is that it isn't particularly floral. It's like a spiced, powdery cosmetic aroma, as if someone's perfume has worn away and you smell only their skin and make-up. I imagine there's some cardamom in there, but who knows, with press materials like those put out into the marketplace by "the creators of Le Labo". I would be surprised to learn that Bugey isn't the nose behind Poudre, though I thought Mondo Guerra was a sure thing this season on Project Runway, so where's my compass and what is it leading me into? I like the stuff, regardless. I would classify it as an oriental-spicy, though on the Anthropologie webs site it's listed as "Fresh". I should reiterate: I thought Mondo Guerra would win.

Belle Du Soir is listed by Anthropologie as "Spice". I wouldn't have said as much, but you might expect that by now. Both Belle and Poudre smell unisex to me in novel ways. Poudre makes lipstick feel like a nice wool business suit with stubble, while Belle does something to gardenia I've never smelled before. I won't pretend like I know what's going on here. Me, I smell some vetiver, but sandalwood, cedar, and patchouli are listed. There's something fresh and spicy about Belle that I really like. It doesn't have the projection of Poudre, and it's lighter in tone than I'm usually inclined toward. It's a nice surprise, and I think it's the kind of fragrance you need to take off by itself, away from the cornucopia of a store like Anthropologie, to fully appreciate.

Chant de Bois was killing me. I knew I'd smelled this before. It might have even been something I own. It's great, a floral woody spice, I would say. Anthropologie says: "Spice". They also say "femme-woodsy", which is fine. I'm not going to get red in the face about this stuff so much anymore. I understand: the Anthropologie clientele is decidedly girly. Gay guys like me will walk in and buy it regardless, whether it has a bow on it or is covered in sequins and pink feathers, as long as it smells good. I suppose it doesn't have to spell MALE across the front in a reassuringly masculine font. Chant doesn't last quite as long as I require of anything more costly than thirty bucks, but it's pretty fantastic. And it finally hit me. Chant smells like the child of Perles de Lalique and Encre Noire, causing me to wonder whether Nathalie Lorson, the nose behind those two, is the nose behind this one. Again, I wish I knew.

I can't remember the last time a fragrance like these was released without making the perfumer's name known. It's become so routine to make the name public that I hadn't much cause to think about it until now. Not knowing who truly "created" these fragrances made me realize it matters to me. I understand, I think, what the "creators of Le Labo" have at stake in this gamble. It's great if these relatively inexpensive fragrances sell, but they're meant to be aspirational and to extend the brand. A perfumer's name, while part of the project at Le Labo, isn't necessarily going to serve the company by competing for bottle space on the shelf at Anthropologie. Still, the last most interesting thing that store did was a series of tea fragrances, each of which featured a different perfumer's interpretation. It seems odd that Anthropologie would pick up the idea of niche perfumery and employ it on a retail chain level, while Le Labo, entering the same space, would basically revert, acting like niche perfumery never existed.

The fragrances come in candles and solid perfumes as well. This article at Vogue Daily, quotes Fabrice Penot and Edouard Roschi, said "creators", discussing the scents with a little more detail, slightly contradicting the descriptions on Anthropologie's website. The above image is by Marko MacPherson and was featured with the article in Vogue.
Posted by Brian at 11/04/2010 05:03:00 PM

I just got to sniff these today. I also like Poudre d'Orient so much that I may buy it. Belle de Soir is a really interesting scent, but not up my alley. Chant de Bois was also pleasant to me, and I thought Bouquet was a decent big floral. The citrus one seemed insipid.

Funny, I sprayed Poudre on this morning before leaving the house, sort of as an afterthought. I smelled it most of the morning and into the afternoon, and the same person who complimented it last time did this time too. Maybe it's just her.

The weird thing is, the last time she commented on my fragrance I was wearing Kenzo Amour. And like I say, I'm convinced they're both by the same perfumer.

The Bois is nice but it just doesn't last on me.

Belle lasts a little better but ultimately just seems...pleasant. It doesn't have the stealth of Poudre. If longevity matters to you I would definitely add some points in favor of that one.

Other thing I noticed was that Bouquet had some stealth too. Subtle stealth but stealth all the same.

Hi Brian: Angela at Now Smell This made the connection between Poudre & Kenzo too: Flower Oriental, to be specific. I don't know that Flower flanker, but Poudre did strike me as similar to Winter Flowers, an absolute favorite of mine. I may end up with a bottle of Poudre.

Chant de Bois smells like Terre d'Hermes to me.