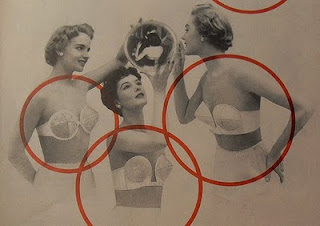 From "Ceremony in Lone Tree" (1959) by Wright Morris:
"The child was growing too fast as it was. Already the college boys were whistling at her. Up through last summer Maxine had been able to dress her in middy blouses and tunics, with bows in her hair to match the tennis sneakers on her long feet. With her pencil box labeled SCHOOL DAZE, and her notebook with the pyramid on the cover, she actually looked younger, with her books hugged to her front, than some of the smart little girls wearing pumps and make-up. Etoile didn't need it. She came with her own make-up, as Mrs. Olmstead said. But in the pocket of her notebook, along with Marlon Brando, Maxine found a ten-page article, clipped from a magazine called Erotica. There were pictures of the busts of famous beauties, beginning with the Venus de Milo, down to Jayne Mansfield and Christine Jorgensen, who had started out as a man and ended up as a woman. Under Jayne Mansfield, Etoile had written, Not so hot. The article recommended massage with the bare hand and a daily application of cracked ice for firmness. Maxine had almost panicked. She had gone through the drawers of Etoile's bureau as if she might find something like cracked ice, and read two months of the diary she kept on the back of her telephone pad. On Tuesday, November 8, she had written, Ran down the stairs just to feel my breasts bobbing. Poor Lillian Strauss! In her pencil box she found a secret compartment, with mascara for her eyes, and Tabu, a perfume no man could resist. Pinned to the lid was a snapshot of a boy without a stitch on, his back turned to the camera, that Maxine recognized as Etoile's cousin Calvin because he was wearing his stirrup boots."
Posted by Brian at 1/04/2011 10:33:00 AM

I think I already said "wow" somewhere else.

I know, right? There's another passage from the same book. Calvin, the girl's cousin, gives her some perfume. A leather.

I must find this. Bet my library doesn't have it.

My sister wanted to chip in on a Nook for my birthday. I said, "No. If I have one, I wouldn't get anything else done." (Besides which, I don't have WiFi.)

Actually, what I WANT for my birthday I can't have: uninterrupted time free of Mom duties. Grr.

Wait, I'm whining. I resolved to cut down on that this year...

It's a good book, Muse. Takes place in Nebraska, on the occasion of a 90 year old man's birthday. His family gathers round. Its told from their points of view. The BEST book I've read in a while was Mildred Pierce. Wow. Blew my mind open. Very good book. It completely surprised me.

I like the bare hand and a little cracked ice on special occasions .At my age sadly though the hand is feeling for lumps and the ice is only to cool down a hot flush.