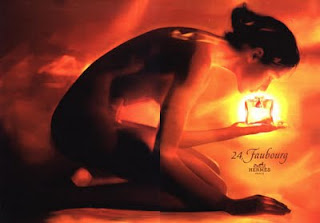 It's ironic, I guess, that the current fragrance profile at Hermes is regarded as sophisticated, elegant, and refined, while the fragrances themselves are largely so wan and vegetal.  I won't say the things in house perfumer Jean-Claude Ellena does for the brand aren't elegant, but they define elegance in a pretty different way than I would - in or outside of Hermes.  This speaks to changing times, and what is generally considered chic these days, probably:  clean, effervescent, sparkling, and austere.  Yet no fragrance spells out what I think of as "Hermes" to me more adroitly than 24, Faubourg, a fragrance which has to be the quintessential antithesis of something like the cold-hearted, icy thing which is Kelly Caleche.

24, Faubourg is creamy and ornate, without feeling particularly heavy to me.  In fact, the top notes are practically sunny.  It resembles another ornate fragrance, Ysatis, in certain respects, characterized by a rich floral accord with deep amber tones, but lacks the dusty incense quality of Ysatis, feeling somehow quieter, though neither could be said to whisper, exactly.  Ysatis dates back to 1984, preceding 24, Faubourg by nearly a decade, and it's interesting to see how little the cultural idea of opulence they represent changed in the intervening years, especially when you look at how drastically these fragrances differ from Ellena's fairly recent work for Hermes.  Faubourg is not a particularly large leap from 1984's Parfum d'Hermes (now Hermes Rouge), speaking much the same language, if using different verbs.

I have two versions, one of which is the original edt, the other of which is a more recent eau de parfum.  There is very little difference between the two, except in respects to longevity and projection.  For me, the edp stays a little closer to the skin but is richer and creamier.  The edt isn't exactly lighter, and I can smell more of the vanilla and patchouli.  It doesn't last quite as well as the edp, but it's hard to say exactly, as neither concentration is anything close to a lightweight and the edt projects a little more, giving it the illusion of more mileage.

24, Faubourg is the very best of Roucel's work, and seems to have a clarity and a resolve that some of his more contemporary fragrances sometimes lack.  It's a statement, a declarative thing, compared to something like Dans tes Bras, a fragrance Roucel created for the Frederic Malle line.  Dans tes Bras is no less forceful, but it feels muddled and morose by comparison to Faubourg, as if Roucel were struggling a bit to adapt his style to changing times.  Dans tes Bras makes a valiant effort to hold onto the old school opulence of Ysatis and Faubourg but ultimately mumbles a little incoherently, insecure in its point of view.

Faubourg is a lot more confident in outlook and execution, I think.  It sits very comfortably within the range of chypres from the eighties and nineties.  It knows it belongs there, and that "there" is a perfectly good, even enviable place to be.  It's rich and intense and feels like a coat you've worn for years and wouldn't dream of giving away, knowing they don't make it anymore and nothing new will ever feel so wonderfully lived in.  I suppose the biggest difference between Faubourg's kind of thing and Hermes by way of Ellena these days is the sense I get from the Ellena fragrances that they are a little like trying to keep warm in a still-wet watercolor.
Posted by Brian at 5/20/2011 04:22:00 PM

I love your reviews. This is excellent; I have only tried 24, Faubourg from my sample a couple of times but will have to retest it tonight.

(Currently ooohing and aaahing over a bottle of Aramis JHL I just purchased. :)

Thanks, Brian. Put a lot on when you try again. 24, faubourg is one of those full bodied fragrances and it helps to get the big picture. Isn't JHL nice? I love that stuff.

I keep meaning to try 24,am definatly going to now.
I'd been a determined collector for over ten years,and then lost 95per cent of my perfumes in a terrible accident. By 'accident' I mean..'my partener of 12yrs,,whilst I was away from our home in Thailand ran off with another woman when I was away in N.Y,and gave her all of my belongings' kind of accident.
I only had about 10 of my collection I'd taken away with me to N.Y. The point behind the before mentioned saga is I didn't have the heart to to keep collecting after loseing so much untill finding this blog. Its rekindled my scented broken heart, and I can't thankyou enough for the pleasure it's given me.
Abigail,you're certainly no slouch when it comes to the written word yourself, but your spot on to praise Brians written posts, they are a joy to read!
Thankyou both so much.

For many years I neglected Fauborg. Why? I have no idea. I sniffed it once, didn't like it and never tried again... until a month or two ago. I wasn't targeting it specifically. I just was in a testing mood and there was absolutely nothing else in the store that I wanted to try and haven't yet. So I decided to try 24... And I liked it. Is it a FBW perfume for me? Probably not. But I started looking at minis on eBay and will probably end up buying it once my sample is gone.

Enjoyed the review, thank you Brian.

I too have an older 24 and the new one.
I think the advertisement, featuring a warm orangey-amber glow, is about right for how it makes me feel. When I first bought 24, years ago, I wasn't sure I could carry it off, as chypres were a little scary! But now, I love it.

I thought I'd try 24,but was distracted by the desire,no the Need to replace some of my much missed friends from my collection I'd lost.
When,and how did my darling Organza Indecence become so expensive? My good friend Celine Magic?!?! Tenations, where hast tho gone,pumpkin?!!!
Why why,did no one think to TELL ME??!!

Museing about Abigails great post about fragrance marketing, what do you think will happen to Gallianos fragrance? Rebottled under a new name, kept on? I won't be buying anything with the man who loves Hitlers name on it. I'd also heard the rumour of a certain perfumer who donated to Right to life(which made me run a mile) Thankyou for your very honest clarifacation on that. oops, off topic again, DOH!!

I adore 24 faubourg. I bought my first bottle in 2000... when the sales person at Marshall Fields told me it was the fragrance of Diana Princess of Wales ....my reply SOLD. I enjoy how you put the fragrance into words. I never thought of the comparison with Ysatis which was my signature fragrance for years ... I was a perfume model for Ysatis for years!!!