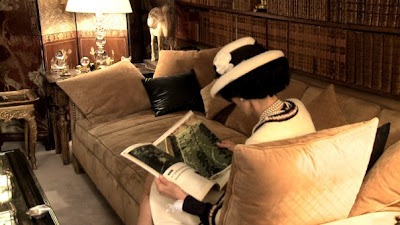 Chanel calls 31 Rue Cambon a chypre - sans oakmoss - and for a while I couldn't really see it.  The fragrance is rich and gorgeous, for sure, and somewhat old school in character, but it lacks that earthy, vaguely animalic bitterness I associate with the chypre accord.  Many "modern chypres" lack that, leaving me to wonder what exactly a word is worth if, eventually, it can be used to mean practically anything.  I understand that oakmoss is now restricted, but many of the so called chypres on the market these days don't seem to capture the essence of what a chypre is meant to be, oakmoss or no.  31 Rue Cambon seemed much zingier to me than any chypre that came to mind, and while not exactly as far removed from the term as a fragrance like the strawberry-saturated Miss Dior Cherie, it seemed closer to something like Allure (oriental - floral) than, say, Cabochard or Knowing.

Until today.  Recently, a friend found a vintage bottle of Mitsouko in a local antique store.  The Baccarat bottle is the nicest I've ever seen - blockish and curvy in all the right places - and the juice (I believe it's eau de toilette concentration) is a lot deeper than the present formulation, but it dries down to essentially the same thing, and because I've been smelling it a lot lately, and happened to revisit 31 Rue Cambon in the meantime, I saw similarities I hadn't before.

For me, 31 Rue Cambon sits somewhere between the floral vanilla of Allure and the deep golden hues of Mitsouko.  It's a bright fragrance, so shimmering at first, and really for a while, that it was hard for me to classify in any useful way.  Where Mitsouko is somewhat like sunshine through a pane of amber glass, 31 Rue Cambon is like sunlight hitting the beige upholstery of a sublimely cosy couch.  It's well blended, and more than anything it simply smells like "Chanel" to me.  That's part of its draw for me - its ability to evoke a world and a sensibility you can see and feel but can't pin on any one thing in that universe.  I don't get specific florals, or woods, or the bergamot I'm sure must be there.  I get "Chanel" - and unfortunately I can't tell you exactly what that is.  Pyramids are useful where words fail, I guess, and I could tell you what is said to be in 31 Rue Cambon - pepper, floral notes, chypre accords, iris - but the fragrance is more about associations to me.

It's as if the brief for 31 Rue Cambon were simply "Elegance".  I love many Chanel fragrances - particularly Cuir de Russie, No. 19, No. 22, Coco, and Coromandel - but none, not even the house's most iconic scent, No. 5, really seems to conjure the spirit of the woman behind the house and all the legends and details that coalesce in her biographies in any comprehensive way.  It's fitting that 31 Rue Cambon is named after Coco Chanel's famous address, at which were constellated her apartment, her design studio, her workshops, and the line's haute couture salon and boutique.  All the other Chanel fragrances pinpoint for me one or two aspects of the Chanel persona and mythology, but 31 Rue Cambon seems to take in the whole legend, playing out on the skin like a greatest hits anthology.

Which isn't to say it lacks focus.  31 is in fact an incredible distillation of a pretty complicated series of impressions about Chanel, the house and the woman, apocryphal and otherwise, and it might be best to think of it like one of the iconic photos depicting Chanel sitting in one of the address's rooms, her stare and her surroundings inviting projections about luxury, beauty, and the past.  31 lasts reasonably well, though it drifts sooner than later into a soft, powdery, floral melange, and rides things out from there, fading like a memory.

The photo above was taken on the set of the film made by Karl Lagerfeld in Chanel's former apartment at 31 Rue Cambon, and feels to me like the fragrance, a reconstruction based on iconic motifs, shapes, colors and silhouettes.
Posted by Brian at 9/17/2011 01:51:00 PM

I don't think of 31RC as being a chypre, either. In MY mind, it sits next to Alahine as a floral amber, although I love love Alahine and only seem to want 31RC when I want to smell (Good Lord, can I admit this in public?) rich. It seems so quintessentially Chanel-y to me, in ways that I couldn't articulate but that you have done here.

Hi Muse, I think you're right. I never thought of Alahine but they have a similar overall ambience, and Alahine is better suited to my personality, probably. Something about even my favorite Chanels makes me feel like a rich woman too. It's a little more of a radical experience on a guy, so I can get behind it. I feel like it's the last place that rich woman would want to be, and I like to force her to slum a little in my world, where the couch isn't upholstered in 100% cashmere.