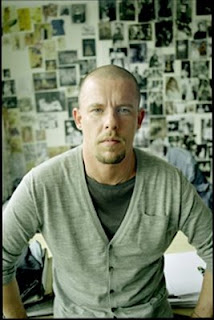 When he took over the house of Givenchy several years back, and the world at large first started hearing his name, designer Alexander McQueen publicly dismissed the religiously esteemed founder of the company as “irrelevant”, instantly and perhaps permanently establishing his reputation as a prig with attitude and a propensity for shock so showy that few, even now, recognize what an enormous talent he might be.
Son of a taxi driver, McQueen left school at 16 to apprentice with Savile Row tailors Anderson and Sheppard. At 20, he traveled to Milan, where he worked for Romeo Gigli. He received his Masters in Fashion Design from Central St. Martins College of Art and Design in London; his thesis collection was bought in its entirety by the late Isabella Blow, his equal in extravagant uncanny with a specialization in baffling estrangement. He was one of the youngest designers to be awarded British Designer of the Year, receiving the honor three times between 1996 and 2003.
His clothes, however shocking or unusual, are impeccably conceived and constructed, wonders of geometrical form. McQueen has the talent to back up his attitude, yet the flip side of his arrogance is an apparently sincere desire to be liked. Following all his bluster, humility reads more like an admission of vacuous hype. After the backlash over Givenchy, he tucked his tail between his legs, expressing remorse, publicly teary, wondering why everyone hated him. Then he went about figuring out how to work within the system of a major fashion house with a reputation and an intricately archaic protocol more complex than his instinctive hubris enabled him to understand. This dance of attack and retreat, alternating between hauteur and abject humility, is one McQueen seems destined to perform ad nauseum. 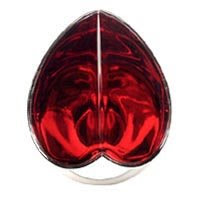 Kingdom, the first fragrance released under the designer's name, marries cumin to rose, tart citrus to sweaty skin. Its reputation arguably suffered sight unseen, thanks to McQueen's own, which preceded it. At the time of its release, much was made of its composition, as if it were as formally innovative as Angel or definitively bold, like Poison. It is neither, but it matches McQueen’s sensibility well, conceptually and structurally, right down to the atomizer. Depending on how one holds it, the sculptural bottle, ruby red glass sheathed in chrome, resembles the prototype for some futuristic heart transplant or a slice of fruit which zests rather than sprays. 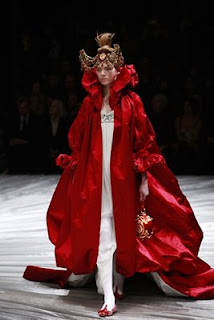 Kingdom is ineffable or elusive enough to resist categorization, though several detractors regard it as unfocused rather than complex. It was composed by Jacques Cavallier, the man responsible for many equally unusual, even challenging, scents. As Chandler Burr said, Cavallier is a "prolific perfumer so successful these days that he often seems to generate a quarter of each year's worldwide fragrance product." Often, the compositions Cavallier has created or to which he has contributed have as many detractors as fans. Among these fragrances are Yves Saint Laurent's Nu, Boucheron's Trouble, Rive Gauche Homme, Acqua di Gio Homme, Armani Mania, Jean Paul Gaultier Classique, M7, and Shiseido Vocalize.
Many of Cavallier’s scents, like Kingdom, might arguably be classified as fascinating mass-market scents harboring deeply niche personalities. He himself comes from what might be considered The Perfume Establishment. Cavallier's family has been in Grasse since the 15th century. His father and grandfather were perfumers. He says that this background and natural raw materials are essential to his craft, yet his fragrances often seem otherworldly, anything but traditional. Rose, Agar Wood, Jasmine, and Orange Flower are the most prevalent raw materials in his "olfactive palette". Cavallier remembers running through jasmine fields as a five year-old boy, and dates his beginning as a perfumer to the time his father first introduced him to the smell of the May Rose. His fondest memory from childhood, he has said, was the image of his mother's eyes when he woke up.
Discussing the creation of Elle, another YSL juice on which he collaborated, Cavallier said that the two most important meetings or moments during the creation of a perfume are the first and the last. During the first, an idea is proposed or generated. By the time the last has been reached, that idea must have been translated into a tangible, marketable product. A hallmark of Cavallier's artistry is his insistence on going bolder after that initial discussion, rather than toning things down toward a lowest common denominator. He has made mistakes of judgment this way, exceeding the fluctuating boundaries of wearability, yet almost all of the risks he has taken, like McQueen's clothing, leave indelible impressions, which might be why scents like M7 become cult favorites after their discontinuation, persisting in the collective imagination the way the childhood image of his mother's eyes have for Cavallier.
Though probably closer to an abstract floral, Kingdom passes in and out of rose so distinctly at times that it might as well be considered a soliflor. This is deepest, darkest, twilit rose, shadowed and thorn-ridden. The addition of cumin and mint takes things from interesting to odd. The scent is unlikely to win any converts to cumin, nor is it quite as fantastically strange (or as repulsive) as people sometimes assert. At times it seems downright old-fashioned in its dogged intensity. The rose and jasmine strike recognizable cords, but are sent off kilter by ginger and myrrh. Vanilla gives a faint suggestion of the gourmand, referencing Guerlain's Samsara. The cumin, as in Olivier Cresp's Rochas Femme reformulation, creates the impression of classic French animalics, creating a persistent edge to the construction, sometimes sharp, sometimes blunt. Maybe serrated is a better word. What you notice right out the gate with Kingdom is the citrus: bergamot, orange, mandarin, neroli. These persist throughout the heart to some degree, and along with vanilla in the base and the salty cumin overall make for quite a succulent experience. Succulent to some, anyway; salty to others. A percentage of the buying public is convinced the smell of Kingdom takes its inspiration from the armpit or, worse (apparently), the sexual organs. For some, that's altogether a bad thing.
True to form, when Kingdom sold poorly, McQueen released My Queen, a much more polite and conventionally feminine perfume, whose title might just as fittingly have been Please Like Me.
Posted by Brian at 11/25/2008 06:23:00 PM

OH MY GOD Brian, this was amazing writing... What a joy to read this article... I consider McQueen to be an absolute genius, so incredibly bursting with talent. (I would buy the whole 2008 winter collection in a heartbeat if I could afford it... These Kusha-shoes, the red jackets with the golden frogging, the fairytale dresses...they all leave me breathless) Yes, you have completely pinpointed the hauteur/humility split personality thing, lol! I have to say that I was a bit put off by his sudden change towards the Queen... I am an antiroyalist and was a bit put off by his sudden brown-nosing. I guess we don't have to both admire the personality and the art created by someone, but it is always wonderful when it is actually possible to feel both admiration for the person him/herself and their works of art. It creates less dissonance for the spirit ;) I love watching his shows which are always so over the top and so full of meaning, although rumor has it he might have to reign his creativity when it comes to putting a great show so as to not bleed money everytime he has to show... Anyway... Thank you for the absolutely wonderfully written read. Sorry for not focussing on the perfume.. but I am obsessed with his clothes!

Thanks, Divina. I enjoyed writing it. I've been interested in McQueen since I first saw the cover image of Bjork's Homogenic "album". His worldview is so severe and structural, elegant and icy. I remember him crying on TV--or seem to remember that--after his first big show with....Givenchy?...was heavily criticized. I'm sure it felt hugely personal to him, and that seemed bizarre to me, that someone who was so arch and catty could suddenly turn so fragile. I think they're flip sides of his particular coin. I don't think he probably has any real idea how he comes across, though he seems to have learned a little better how to do damage control. Have you tried Kingdom? I really love it. Turin hates it. Hate might be a strong word: his reaction is much too ambivalent for hatred. He's thoroughly unimpressed/unenthusiastic, anyway. It's not the weirdest smell in the world, nor the best, but it deserves more than one star, and personally it's one of my favorite cavallier scents, much more so than M7, which gets more love maybe. I've never seen a McQueen show. I need to go catch one on youtube.

You either loved or loathed Kingdom; I happened to love its weird, aggressive sexuality. It smelled of fresh sweat from certain areas of the body I won't go into here, but let's just say it went over well. :-) Very, very strong as well; huge drydown.
(Just a few months ago I was missing this discontinued scent. I should have got a bottle at Yatego or E-bay right then and there; this thing will be unaffordable now.) An absolutely unique scent to match the persona of a unique fashion mind.
Thanks for posting.

Thanks, Michael. How did I just now notice your comment? It's good to hear from you. I revisited this review today, after deciding to wear Kingdom this morning. Someone on facebook told me the prices have soared. I guess it's a good thing I bought three tester bottles when I first found the stuff at a discount store. Having a surplus has caused me to take it for granted, and I forget how good it is. Kingdom was among the first twenty or so fragrances I purchased and loved. I've seen so much more now that I get a little jaded and it seems rather pedestrian in my mind. Today I realized it's really anything but. And I've been enjoying it immensely all morning.