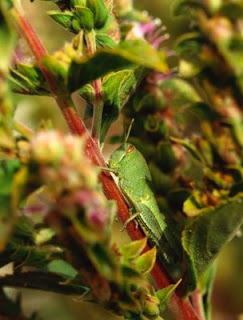 Some people are going to tell you this smells like a head shop, which makes me wonder how many head shops they've actually been in. Once you've lived with a hippy who rubs patchouli oil in his dreads, you understand the difference, and could never mistake Molinard's entry into a cluttered category for that dread toxin.

To be sure, Molinard Patchouli has that balsamic heft people associate with head shop, but it has levity aplenty, too. Many patchoulis have a density approaching claustrophobia. There's a rich boozy undercurrent to this one, augmenting the tenacity of the patchouli accord in such a way that it seems to breathe and expand on the skin. Perhaps this leavening effect is contributed to by a renegade floral accord, as well. I've heard tell of carnation--even citrus--in the mix. It wouldn't surprise me. Once patchouli breathes this way, all sorts of things materialize. When the door to a dark room flings open, you start to see all kinds of things around you. Here I smell caramel, port wine, camphor, even hints of vanilla at various times, but that's just me. People have called Molinard Patchouli linear. I don't really buy that. It's probably sensible to expect that any patchouli fragrance, no matter what else it does or where else it goes, is going to smell recognizably of patchouli from top to bottom. There might not be any caramel in Molinard Patchouli, but the fragrance morphs enough, however subtly, that smelling it over time becomes a highly subjective process of interpretation and associative guess work.

Molinard released this Patchouli as part of the Les Scenteurs Collection last year. The fragrances are meant to be layered and have been repackaged in clear glass bottles with art deco silhouettes. I never smelled the original Molinard Patchouli and can't attest to whether or not this is the same one, a reformulation, or an entirely different animal altogether. The longevity is admirable even for a patchouli fragrance (Antique Patchouli comes to mind, itself persistent, but outlasted by Molinard). It's a great fall scent, and though it has an organic feel to it, I wouldn't say it has the rubbed in dirt quality of some of my other favorite patchoulis. I would say, instead, that Molinard Patchouli has fraternized with fallen leaves, becoming, like them, slightly damp, slightly smoky. The leaves might have touched the ground, but the patchouli hasn't.

People scoff at Molinard, unless it's a question of Habanita and M de Molinard, both of which I own and love. Molinard is no Guerlain, and I won't suggest otherwise, but I've always had a soft spot for them. Nirmala is lovely. Their muguet is decent. Madrigal I adore and would love to get my hands on, if only to love it and squeeze it and kiss it all over, and name it Rex. I'm not so picky. The violet I smelled at Perfume House in Portland was swell, too.

Thank you for the tip on the Molinard bargains. I'm curious to try their Vervaine (which is only $20). Have you tried any of their other scents?

Hey there. A friend of mine wanted to buy Angel but something told me Nirmala would be more user-friendly. I bought it here in town and, smelling it again, I wondered if I'd been right. It's not such a wallflower itself. I like it a lot. It has a fruitier edge than Angel, has more transparency to it, but just as tenacious, if not somehow more so. I like M de Molinard a lot and think foetidus describes it well on basenotes. Habanita I love. At Perfume House in Portland they carry the Molinard line with all the older blue bottles. I remember smelling them and loving a lot of them but being a snob about it. I'd never smelled L'Artisan or Serge Lutens and didn't see how I could possibly buy something as trifling as Molinard instead. Of course, they last longer than L'Artisan, and cost considerably less. I remember really digging Madrigal, though I can't remember why. I ordered it today online for like 20 bucks. The muguet and violet seemed nice to me. I wish I could remember the Teck and Vaniteck. Foetidus says Verveine is fantastic but like many eau de colognes short-lived.