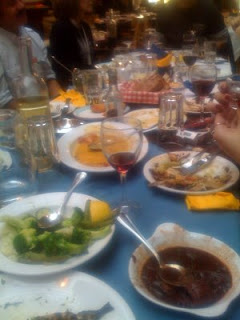 I'd been advised by Perfume Shrine and Fragrance Bouquet that, when it comes to perfume shopping, Thessaloniki leaves a little to be desired, and while they do have a point, I was pretty happy to find several things I don't come across in the states. The Sephora on Tsimiskis Street was the biggest I'd ever seen, and stocked Jungle Kenzo Homme, Kenzo Jungle Femme Elephant, Kenzo Ca Sent Beau, Cacharel L'Homme, Dior Escala Portifino, Kenzo Air and Air Intense, Dior Homme Intense, the new Guerlain Insolence EDP, and others. The Hondos Department Store on Alexandros had Monsieur Balmain, Moschino Glamour, a series of four or five variations on Missoni (rose, giallo, etc.), Eau de Hermes EDT, Rocobar, Carven Vetiver, all the Dali's, Shiseido Feminite du Bois and Vocalize, many of the Van Cleef and Arpels, M7 and M7 Fresh, Chanel Pour Monsieur and Chanel No. 19 EDP, Krizia Time and Eau de Krizia, all of the Laliques (including the newest, Lalique White for Men, as well as old timers Equus and Faune), Dolce Vita, Lacroix Bazaar, Dior Forever and Ever, and too many others to enumerate.

Comparing it to the original, Luca Turin describes M7 Fresh as an entirely different fragrance. It smells very much along the same lines to me, albeit much lighter, with a medley of herbs standing in for the concentrated aoud of M7. It's an interesting contrast, demonstrating how variable the same basic elements can be when used in slightly different proportions with a few strategic addditions and subtractions. I only wish it wasn't so fleeting, and it seems interesting to me that people find this more accessible than its predecessor, when both are challenging in their own ways. I'm not sure a poultry rub is any more wearable than ancient sap.

Jungle Homme was one of the real finds of my trip. I was surprised to see how mixed the reactions to this 1998 Olivier Cresp fragrance have been. In some ways, it seems as radical a reformulation of the standard masculine as Cresp's Dior Homme was. Nutmeg and Mate make for an interesting, herbaceous green accord, and the underlying milky tones of Jungle give it a strange, compelling depth. It lasts all day, one of the most persistent, diffusive masculines I've smelled.

Lalique White seemed a fairly average specimen to me: some citrus, some spices, an overall impression of tangy cardamom. Note to perfumers: Cardamom is swell. A tire is handy too, but doesn't make much sense without a car. Can we move on now?

I folded at Fena Fresh department store, finally slapping down the dough for Comme des Garçons Luxe Patchouli. I waited over a year to buy it, telling myself it was too expensive, though I loved it more each time I smelled it and in the meantime spent its price many times over on various other perfumes I liked much less. Why I waited to spend Eurodollars on this is anyone's guess. Maybe the presence of fenugreek was decisive for me and seemed, in the context, apropo. Maybe having less to choose from did the trick, providing some clarity.

Whatever the reason, I love Luxe Patchouli, and people, this stuff lasts all day. Ask anyone on the Lufthansa flight I came in on from Munich. Three hours to go and I discovered the bottle had leaked in its plastic bag. The man sitting next to me coughed all the way home. The woman in front of me turned arund several times to make sure I knew her eyes were watering. I threw out the zip-lock, wrapping the bottle in paper towels. I washed my hands repeatedly. No matter. Luxe Pathcouli outlasted any attempt to eradicate its aroma. 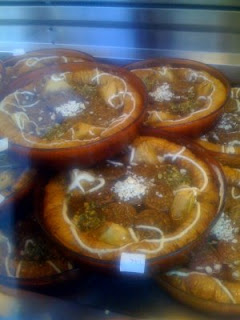 The real discovery in Greece was the food. It's rare, I was told, to order for, let alone dine by, yourself. Dinner is an event which lasts at least an hour--sometimes as many as three or four. Wine is dispensed. Sometimes Ouzo. Plates are laid all up and down the table. In Greece, food is perfume for the mouth. I can't tell you how good some of this stuff tasted. And that's only covering the restaurants. The pastry shops alone could easily have kept me entertained all day. One pastry was a huge, stuffed, frosted croissant filled with a dry ground cocoa, sugar and nut medley. Many were drenched in syrup. There were spinach pastries, prosciutto, ham and cheese. One night at dinner there were stuffed breads, hot feta pates, fries, meats, a battered tomato and vegetable pakora-like dish. All of it circled by cigarette smoke and the hearty banter of Greek conversation. These events start around ten in the evening, and God help you if your hotel room is located above a restaurant patio.

In all of Thessaloniki I noticed next to no perfume in public. I smelled it only on one man hurrying down the Alexandros and considered following him just to bask in the pleasure of someone else's fragrance. Two girls exited the Hondos Department Store smelling each others' wrists excitedly. I was in town for a film festival and none of the films I went to, save for the last, smelled of anything but smoke and indeterminate theater odors. My final night in Thessaloniki I attended a screening with a critic from Romania. Half way into the film I smelled something familiar. Was it Belle en Rykiel? It certainly smelled like it. Was it her or the woman on the other side of me? Was it perfume or cosmetics? After the screening I forgot all about it, until at dinner the Romanian said whatever I had on (Jaisalmer) smelled remarkable. I remembered then to ask her what she was wearing. The latest Balmain, she answered. Ambre Gris, I asked, excited. Yes, it was, she said, and after dinner I brought her to the room to give her the decants I'd made for the trip: Mitsouko EDP (her favorite but very costly in Romania), Jaisalmer, Chanel Cuir de Russie, Cedre Sandaraque. I also showed her Perfume: The Guide, which came as something of a revelation to her. As a critic, she appreciated it even more.

On the way home I bought Eau de Galliano at the duty free, after dismissing it on the way into the country. It seemed like something I should get to know a little better, even if only to dislike it with more clarity. Woody, violet, powdery, and openly synthetic, it isn't at all what I'd expect from Galliano, which makes me wonder if my mind will change over time, after some amount of adjustment.

Arrrgghh! I hate when bottles leak. It's expecially annoying when you can't return it to the store. And I'm surprised your plane wasn't met by a Hazmat team... ;-)

Must try Luxe Patchouli, though I suspect I will want it, and I can't afford it.... *sigh*

So lovely to read your impressions of the city I lived in for such a great part of my life! I am glad you found so many things to entertain yourself with! In a previous comment (above) I requested more thoughts on Luxe Patchouli before I got to read this.. but now I know you bought it! Good choice ;)