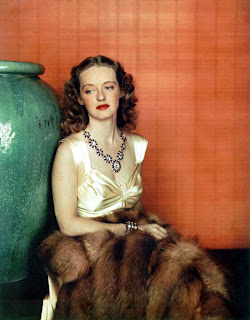 I've been thinking a lot about star quality lately. I'm reading a book called The Star Machine, in which the author, Jeanine Basinger, "anatomizes" the old Hollywood Factory, a system which manufactured desire, then sought to fulfill it by the creation or cultivation of stars.

What made one person (Greta Garbo, for instance) a mega star, where another equally beautiful woman, also a good actress, might not have been? It wasn't just the publicity behind her; the studio system working overtime. It was some indefinable but inarguable quality she had. Hollywood saw this potential in many people, and was able to exploit it in some by tweaking the basics: straightening teeth, perming hair or raising a hairline, crash diets, plastic surgery, dance lessons, voice lessons, poise instruction. Where the raw material didn't already exist the studio bosses sometimes tried to create it from scratch, but this almost always ended disastrously. Whatever that seed quality was, however much they improved upon it or tried to devise a formula to replicate it, it existed beyond definition and all practical logic. As one observer of old Hollywood said, you knew star quality when you saw it, not before then. How many studio executives, seeing Bette Davis for the first time, would have imagined 21st Century America would remember her name?

Inevitably, I started relating these questions to perfume. What is it about some fragrances, what quality, that makes them so powerful? We're talking about something like Angel or L'Heure Bleue, perfumes which have legs and walk right into the next century, never losing their appeal, becoming iconic over time or even instantly. It's the difference between Joan Crawford, who survived the transition from the silents to the talkies, and Pauline Frederick, who didn't. MGM wanted you to believe they'd created Joan Crawford out of whole cloth from one Lucille Le Sueur, as if there were some secret recipe they followed for mass appeal. Moviemakers are always trying to replicate the success of what appears to be a proven format, with an actor or a movie that resembles some other runaway hit. Similarly, the perfume industry released gourmand patchouli after gourmand patchouli trying to capitalize on the success of Angel (Chopard Wish, anyone?) and who knows how many fruity florals have flooded the market in the last decade, thanks in small part to the sales of a few fragrances like Carolina Herrera.

Pyramids and ad copy for these perfumes are full of pure untruths, half-truths, and fantasy images which try, like the old Hollywood fan magazines and studio star bios, to build appeal. From The Star Machine: "The 'bio' was a blatant advertising tool, designed, like all advertising, to shape the buyer's attitude and convince him that he needed the product... " But few of these knock-offs or sequels succeed on any kind of level that would validate the idea that a hit can be carbon copied. The secret of this kind of success eludes everyone, not least the perfumers themselves, who devise the formulas to begin with.

Some perfumes have built mythical worlds of imaginative association around themselves beyond any attempts by their manufacturers to make them best sellers. It's something mesmeric about them and no one can put their finger on it, though a few, like Luca Turin, find words to convey their power. Like, say, Ingrid Bergman, they've transcended a list of attributes and statistics and become something more, something huge, sustained by fantasy and desire. Plenty of actresses were foreign, had blond hair, a nice smile, a certain sadness, but no one else was Ingrid Bergman, just as Bergman was no Greta Garbo, whose success she'd been an answer to. Some of the most beloved perfumes have been helped by their parent companies. Guerlain has done particularly well building an image for its progeny, creating an air of glamor and intrigue very close in spirit to films like Casablanca. Chamade becomes an actor, a star, in a series of movies in the mind of its wearer, overwhelming the senses in a way no one truly understands. Turin can relate the plots of those movies in a way that brings them to life on the page. But who could film them?

Which of the classic perfumes would be which stars? Which match what persona in terms of broad appeal? Bette Davis would be Habanita, Tabac Blond, or Magie: something a little difficult, a challenge to fully aprehend behind all that cigarette smoke and bravado. Garbo would be Mitsouko, I've decided. Joan Crawford might be Cuir de Russie--or Coromandel. Something with thick eyebrows and fearsome bone structure. Grace Kelly would be Chanel No. 19, compellingly aloof, hot and cold simultaneously. Jimmy Stewart might be Monsieur Balmain; affable but sturdy. 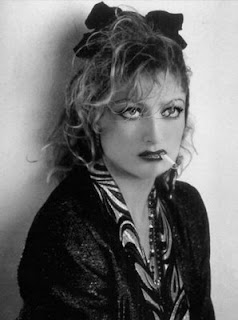 Modern stars are typically better suited to modern perfumes. Informal, gregarious Julia Roberts is hardly a rich oriental. She has that curious appeal of a fruity floral you wouldn't expect to find yourself falling for. Something fun-loving, with a sense of humor. Juicy Couture? It smiles big, has an easy laugh, is effervescent and uncomplicated, and you're hooked. Gwyneth Paltrow is easy enough: Kelly Caleche. What better perfume for a Grace Kelly carbon than one basically named after her? That said, there are contemporary stars you can picture inhabiting older perfumes, Debra Winger being a prime example.

Winger has always seemed out of place within the system and cut her own path outside it, much like Bette Davis, who fought with the studios and won, or Frances Farmer, who fought and lost. Winger seems too big, too willfully complex for the minimalist ambitions of modern perfume, typified by Jean Claude Ellena. She makes more sense with something like Bandit, too busy cutting her own path to bother daring you to understand what she's about. Even most of the niche fragrances seem too simplified and straightforward for her. Unless you're talking about something discontinued--something too complex and unusual, too headstrong in a certain direction to make it in the mass marketplace. Shaal Nur, maybe. Or Dzing! 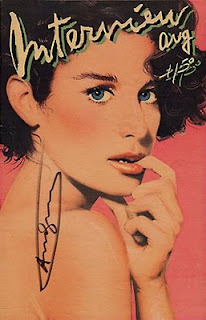 One person might feel nothing for Crawford, or Garbo, and yet the draw is hard to deny, that star quality. Others, like Winger, difficult in some way or with less popular appeal, are acquired tastes. They're really character actors with the looks or magnetism of a leading player, too shaded and nuanced for superstardom. I think of Alexander McQueen, having just written about Kingdom. The reviews were pretty stratified. Kingdom would fall into a love it or hate it category. The kind of star that divides opinion, with little room for half way, and is consequently shoved aside into the margins, where it plays a supporting or unnoticed role. Black Cashmere and Givenchy Insense come immediately to mind. Then there are the stars and perfumes which make no pretense about aspiring to this very category, making another kind of stardom out of marginality. Comme des Garcon has specialized better than any other brand in this way. Etat Libre D'Orange has followed in their footsteps. Etro walks the line but probably having wandered into it inadvertently.

Just as the studios tried to manufacture star power out of simple boys and girls from Idaho, the perfume industry tries to hype a whole lot of nothing much into superstar status. It only rarely works. And in a climate of empty buzz and super-saturation, critics like Chandler Burr and Luca Turin, as with Pauline Kael in film, encourage us to re-evaluate our unconscious, unexamined attractions to various stars, putting chinks in their supremacy and, maybe, taking some of the wind out of the sail of a commercial entity which is full of hot air. The downside of this is that sometimes the critics themselves become authorities with the power to blow something out of proportion or to knock it down without much more than a sigh, like columnists Hedda Hopper and Louella Parsons once did movies and movie stars.

"Parsons and Hopper...could inspire genuine rage among members of the motion picture community helpless to fight them," writes Victoria Price in the St. James Encyclopedia of Popular Culture. "When Joseph Cotten once kicked the chair on which Hopper was sitting to bits, after having an extra-marital affair announced in her column, his house was filled with flowers and telegrams from others who had been similarly maligned. But...when Hopper and Parsons liked someone, nothing was too much to do to help—and their power could become a boon for someone struggling to make it in movies."

Thankfully, like Parsons and Hopper, Burr and Turin often disagree, revealing how opinionated and inexact a science the whole equation is. From The Star Machine: "The problem for the business was that the audience didn't all agree on what they saw. Some said that Greer Garson was a talented actress of ladylike grace and charm, but Pauline Kael called her 'one of the most richly syllabled queenly horrors of Hollywood.' For their legions of fans (who still endure), Nelson Eddy and Jeannette MacDonald were the believable epitome of musical romance, but for Noel Coward they were 'an affair between a mad rockinghorse and a rawhide suitcase.'"

Turin gave Kingdom one star. Kelly Caleche is...bleh, to him. And yet Chandler Burr often disagrees with him by more than a single star or even two. LikeParsons and Hopper, those two influential Hollywood gossip columnists, who could make or break a star with a well-worded sentence, Turin and Burr even seem to have something of a competition going, friendly or otherwise. Background in chemistry or not, there is no real science to how perfume appeals to or influences us. Stardom is elusive and powerful, and stars are enigmas. Who can explain my attraction to Galliano eau de parfum? In one way it's perfectly silly and stereotypical. It imitates other more fantastic, more talented stars the way Christian Slater poorly recalls Jack Nicholson. I can imagine how it will be reviewed, once it hits the states. It would never carry a picture, and yet I find myself liking it, more and more, casting it in my own personal movies.
Posted by Brian at 11/28/2008 11:08:00 AM

I just started reading this book. At one time,I wrote copy about MGM Golden Age films and was privileged enough to spend many hours at the Academy's archives doing research on the factory days. They had it down. I came across memos and press releases and so on that were clearly the models for modern promotion. It was utterly fascinating.

Right now I'm skipping around in the book, reading about the R & D of a product: Lana Turner.

Not much is new.

I envy you. The closest I've gotten to the Academy's archives is the book of memos to and from the desk of David O. Selznick. It's fascinating stuff, not least because of what it indicates about building persona. I actually bought the book for all the star sections, but have found that the first 150 pages interest me more than I counted on. Not much is new. Yeah. I've also been reading interviews with Debra Winger I gathered off the internet. She talks about how Don Simpson, watching dailies for her second movie, Officer and a Gentleman, gave her water retention pills because he thought she looked bloated on screen. She was what--think as a rail at the time. The way these people get managed and manipulated isn't something you hear so much about now, though it still goes on in probably much the same way, studio or no studio, because, unlike Debra Winger, most actresses don't want to develop a reputation for being "difficult".