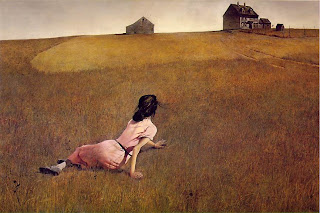 1. Delrae Bois de Paradis: This one has the depth and the melancholy of an Andrew Wyeth painting; specifically, Christina's World. A field of grass with the texture and smell of soft hay warming under the sun. The house isn't so far up the hill, but feels miles away. So where is the smell of stewed fruit coming from? “You can lose the essence by detailing a lot of extraneous things," Wyeth explained. There's nothing extraneous about Bois de Paradis. Everything about this perfume is in accord. Lucky Scent aptly describes the fragrance as "ripe and nectarous, its dark sweetness enhanced and perfectly balanced by woods." The rose is indeed honeyed, as they say, and transformed by the influence of fig. Bois is beautiful but a bit lonely, sitting out by itself in a field with its back to you. You can't see it's face but you know there must be a wistful expression on it. Every time you open the bottle, you hope to get to the bottom of something so impossibly lovely. To wear it is to accept defeat in exchange for nirvana. It all makes a little sense when you learn Michael Roudnitska created the fragrance. Its Spring sister would be Debut.

2. Etro Messe de Minuit: Maybe you're out and about in some European village, trying to navigate the serpentine byways of its ancient streets. You don't understand a word people are saying. Why are they all screaming, anyway? Their incessant chatter, happy as it might be, starts to feel like pepper spray. You haven't heard anyone speaking your language in more days than you can count. No one seems to register your presence, let alone acknowledge your existence. Even the birds seem hostile, lined in rows atop the roofs of the tall buildings you pass. It sounds as if they're laughing at you. Everything feels too big and too wide, you need a sense of scale, so you head into a modestly sized cathedral up the road. The moment you step in, you feel better. It isn't that you're particularly religious, not at least in the way most people seem to be, but the stone walls of the building bring all the sound down to a measure you can handle, giving everything a dulcet baritone edge, as if up close, whispering in your ear. The place is quiet and still and makes you feel as it's wrapped its arms around you. A priest approaches, swinging a thurible with a slow, rhythmic insistence. Its incense wafts in billowing circles, creating a heady cloud around you.

3. Gucci EDP: A strangely happy, slightly balsamic jasmine, very light on the indole, though enough is there you won't forget it. Gucci wears wonderfully, with a curiously insidious sillage. The big glass chunk of a bottle is something a heroine out of a 1940s women's picture might have hit some poor lug over the head with, or thrown at a wall in a glamorous pique of anger, or both. Gucci grafts an old fashioned sensibility to a decidedly modern construction, presenting a new wave beauty in a pleated satin cocktail gown. I'm not going to make excuses for it's failure to be the most revolutionary scent you've ever held to your nose. Not everything should be exceptional simply by virtue of its brilliance. Some things stand out because they get pretty or precarious just right.

4. Guerlain Mitsouko: Mitsouko might not warm the skin, but it certainly warms the heart. This fragrance is quite simply one of the best ever. If you still persist in believing otherwise, whether it happens to be your thing or not, you might want to check into that problem you're having with your barometer.

5. Bond No. 9 H.O.T. Always: It has nothing to do with burning leaves or a crackling fire, but the camphoraceous effect of this Bond No. 9 winner has a solar intensity that will set flame to your senses, and probably frighten any nearby horses. It's been compared to Givenchy Gentleman, and the comparison fits, though H.O.T. has more cinnamon and a marked shortage of Gentleman's rose. H.O.T. is no gentleman. Rather more of a beast. It's a loud juice with a primal bent. It's got its claws out, ready to get messy with mixed metaphors.

6. Caron Third Man: This has got to be the loveliest masculine ever, or good enough that you forget the competition during the time you wear it. Jasmine for days, superimposed over one of those trademark Caron bases, a weirdly gourmand medley of vanilla and lavender. Women, please, wear it too. Everyone should. Oakmoss, vetiver, clove, coriander, bergamot. "Avant-garde but very accessible," says Caron, though why you should take their word for it after what they've done to Tabac Blond is open to debate. Inspired by the Orson Welles film directed by Carol Reed, Third Man is inexplicably gorgeous and supple where that character was shadowy and corrupt. Nothing fishy about the fragrance, and the 125 ml bottle can be had for a steal. Why for Fall? Think of it as the pillow you lay your head on as you watch the leaves turn out the window.

7. Donna Karan Signature: Oh, I know, this is the part where you write in to tell me Signature sucks. Have I lost my mind? Can my taste now be trusted? Will I be singing the praises of Britney Bi-Curious next? The real deal is, supposedly, Black Cashmere, or Chaos. Though I can't attest to the charms of Chaos, I will soon enough, having ordered it from Bergdorf's today--and yes, I do like Black Cashmere but rarely find myself going for it. Donna Karan Signature is a weird little thing, with some of Daim Blond's apricot suede charms. I don't know why I'm drawn to it as strongly as I am. It's a pretty straightforward, soft leather fragrance: some jasmine, some rose, some fruit, some amber. All I know is I spray it on before many other things in my cabinet which are sworn to be better--and it lasts at least twice as long as most of them. It even has the faintest whiff of toilet paper, and yet I'm in love. Who can account for these things?

8. Chanel Cuir de Russie: The leather to beat all leathers into sniveling submission, and with such a cool smile on its face as it cracks that fragrant whip. You can find many glowing remarks about CDR on the perfume blogs. If you're not already convinced of its loveliness, nothing I say will convert you. I don't have half its powers of persuasion. Oh well, more for me--as if the pint-sized bottle weren't enough to last into the following millennium.

9. Lanvin Arpege: I never grow tired of the strange directions this one takes on the skin, from sinus-clearing aldehydes to vetiver to tobacco by way of bergamot, neroli, and peach. Jasmine, rose, lily of the valley, ylang ylang, coriander, and tuberose. Without question, the destination is worth all the twisting peregrinations: sandalwood, vanilla, tuberose, that vetiver, patchouli, and styrax. It's all somehow ultimately smoky, and wears like a dream.

10: Estee Lauder Knowing: Mossy rose with an almost primeval feel to it, like something out of a forest with ten foot ferns and paw prints the size of of Cadillac Escalades in the mud. Which isn't to say it's barbaric or, you know, like the sweat off a caveman's whatnot. It's perfectly lovely, and even old fashioned to some extent; it's just that it doesn't smell like something your grandmother would wear and inflict upon you during the course of those holiday-long clenches to her bosom. It smells more organic, like some happy accident found growing under a long-forgotten tree stump.

here we are in spring in Brazil - any specif fragrance?

Love to hear from you.

I smell, therefore I ...
did spray a beautiful leathery perfume today!...