Donna Karan Gold: a review of the Basenotes reviews 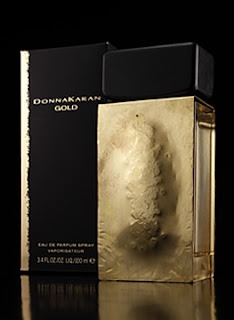 With three cooks in the kitchen, Gold was bound to go wrong, and yet it feels so right--carefully judged, consummately balanced, with one hand in flower, the other in a fertile heap of compost. Then too, these are pretty good cooks. Yann Vasnier is the guy behind Jack Black's Signature Black Mark, one of my favorite cedar fragrances, a soft but persistent cedar burnished with the velvet touch of saffron, and Calice Becker has done J'Adore, Beyond Paradise, and the reformulations of Lancome's Cuir and Balmain's Vent Vert (though the latter has been reformulated yet again). Gold was created fairly recently, in 2006, though in perfume years this might as well have been twenty years ago. As yet it hasn't been discounted as steeply as others relegated to the tawdry backwaters of Perfumanias across the country, yet in the short time since its release the fragrance has become much more widely available. While it can't be had for a song, it is just a hop, skip, and jump away.

“I’ve always been seduced by the passion and power of gold," Donna Karan said of her intentions behind the perfume. "I have finally captured gold’s warm sensuality in a scent...around my favorite elements: Casablanca Lily and amber." Gold is said by its promoters to "illuminate the woman who wears it," reflecting "the glowing light irresistible to all who come close." The verdict is still out regarding the scent's effect on men who wear it rather than smell it. Interestingly, most of what Karan does has a masculine edge or angle to it, and Gold is no exception, not just the fragrance itself but the blunt-edged, square bottle conceived by jewelry designer Robert Lee Morris. The hammered gold metal sheath of the eau de parfum packaging is said to be a "luxe armor." The bottle for Donna Karan Signature for Women, incidentally, is shaped like some implement a garage mechanic might see in a particularly aggressive nightmare. Signature, too, contains Casablanca Lily and Amber.

In addition to these, Gold is said to be composed of Acacia, White Clove, Gold Pollen, Jasmine Templar, and Golden Balsams. The amber quotient is listed on Osmoz.com as "Fluid Amber Patchouli," whatever that means. The impression or presence of pollen, clove, and balsams is discernible. Gold has the tart, almost bitter quality of the potted Easter Lilies you give your mother on Easter Sunday, invitingly lush yet slightly repellent. Though musk isn't listed in the pyramid, it certainly seems to be in the mix, working in concert with the oily fragrant properties of pollen to lend Gold a smooth, almost moist quality in contrast to its simultaneous impression of floral aridity. The curious result is a delicate balance similar to that achieved by Dominiue Ropion's Vetiver Extraordinaire.

The reviewers on basenotes generally seem to like Gold. Of 17 reviews, 11 are positive, 3 negative, and 3 neutral. The nay-sayers are your usual suspects. Trebor thinks Gold is "nice", like your mother-in-law thinks your new glasses are "interesting". "Unfortunately, it's nothing original." Caltha, who has reviewed 380 perfumes (and, presumably, counting), many if not most unfavorably, says, "This might actually be one of the most disgusting perfumes I've ever smelled." Given her odds, this seems suspiciously doubtful. Luckylouie, in her review of Aromatics Elixir, reveals that she adds jasmine to it for a touch of indole, but finds the indolic thrust in Gold a little pushy, like "mothballs". Without voices like Caltha, Trebor, and Luckylouie on basenotes, it might devolve to orgasmic overstatement and baseless, blanket praise.

Some of the reviewers who like Gold comment on the presence of a cucumber note, which is news to me. I do see why cucumber would be a tempting analog. Like Gold, it has a succulent yet crisp quality. However, comparing Gold to this garden vegetable is like saying wood smells like vinyl by virtue of the fact they're both durable. Ostranha seems to capture the mood of Gold well, taking in all its emphatic contradictions:

"I imagine a really hot summers night...standing in a small garden surrounded by flowers and bushes, making a barbeque. It is a really black night, and the garden has few lights... I am really sweaty from the heat and the barbeque but the sweat is smelling sexy and sweet. The smoke from the barbeque is spreading through the garden and through my hair, and suddenly all the white flowers in the garden open up and release their heavy fragrance. I take some black pepper and spread it over the meat on the grill. It's aroma blends with the flowers and the sweat and the dark night..."

Nukapai compares Gold to Malle's Lys Méditerranée and Gold comes out on top, "sharper, a little more rigid, and not too sweet." Tovah compares it to Marc Jacobs, with lily instead of gardenia. Ubuandibeme says Gold is what Chanel Chance wished it could be, "a wonderful Springtime fragrance...the golden essence of women." Arabesque yawns, "A good anonymous fragrance, good for everyday wear or at the office. Soft, floral, grown-up. For a woman with modern taste, in her 30's."

Nary a mention is made of Gold's suitability as a masculine, not even by Trebor, the one man to ring in on the fragrance, and yet on me the dry down verges on butch. Many of the reviewers, however, mention the persistence of the fragrance, which does last with almost nuclear tenacity. I should point out that I haven't smelled the EDT, only the EDP concentration, and don't know how they compare or diverge; nor do I know what concentration individual basenotes reviews reference.
Posted by Brian at 11/02/2008 11:36:00 AM

Gold is lately the...ahem....gold standard of how to make a lovely mainstream fragrance. Wish more people knew about it.
As to men wearing it: surely that bottle relief brings to mind a jock-strap or boxer or something. (is it only me and my weird mind?)

Greetings! I love y'alls blog. Count me among those neutral to Gold. What can I say, my heart belongs to Chaos.

I enjoy the way DK plays with notions of femininity. She rolls with the dark earth yin notion of womanhood, and if anything I find her smoldering amber scents a little too well suited for a matron in heavy cashmere on a rainy new york day. Picture Barbara Walters in central park carrying a pooper scooper after her beloved shitzu.

The gold jock strap could also be Joan of Arc's boob. Or some kind of japanese tea utensil. She's a mistress of ambiguity that way.

Yes! I hadn't thought of that. It does look like a primitive cod piece. I'm surprised by people who say that Gold is ho-hum, conventional, or nothing special. It isn't ground breaking, to be sure, but neither is the majority of the mainstream. It has a subtle edge to it which makes it not only wearable but intriguing. It's the kind of perfume you can meet half way on.

So what is Chaos like? I'm really curious to know. I'm a fan of Black Cashmere, and DK New York is really nice too. I'd like to get my hands on the frags she just re-released. I did smell Unleaded and Fuel and liked them a lot, though I found them less than persistent. It's funny, I can't imagine a matronly woman wearing Gold. I think she would be on board for the first maybe ten minutes or so, then feel deeply betrayed and a little indignant. I like that it subverts this initial impression: it does for me, anyway. Put another way, Barbara is only going to hold the pooper scooper so long before she realizes it's this more than lily passers-by are reacting to.

I have to run out and try this now...I only had 2 spots left on me at the DK counter last time, and they went to Signature (not good) and Fuel (even worse). Fuel is another sad violet-leaf reformulation that seems like a cross between Grey Flannel, Fahrenheit, and Narcisso Rodriguez For Him....except not as good as any of them. As for the BN reviews...no comment. :)

I like Gold, but was annoyed to find that soon after I bought it, all my local stores reduced the price! It now seems to be permanently discounted. *sigh*....

It's my favourite lily scent. I love the drydown, too.

I just bought a bottle of the EDP today, and keep going into my bedroom to look at the bottle. . .then put some more on.

It is truly lovely, in my opinion. The lily burns off and the amber takes over. To me, amber seems such a bohemian scent; it puts me in mind of some garret in the 1920's. After reading the above comments, though, I realized one thing: I really, really do not want people to think I smell like Barbara Walters in the rain, scooping up dog mess!

My only complaint (other than the B.W. fear that's now in my head) is that the scent doesn't seem to last too long.

My bottle of the EDP is in the mail. I could not find it sold in retail anywhere, and the price was great. $42 for the 3.4 oz. That makes me think it's getting discontinued though... Anyone heard? You know how fragrances get discounted right before they bite the dust, and then people charge hundreds for them on ebay...

Nice Article.I am very pleased with the thought and don’t feel like adding anything in it.

Hazel Knight
One of the great things about in-game money and virtual economies is that they never went through this whole economic meltdown. So take that to all of those people who think the real world is better then computer games!
Buy WoW Gold