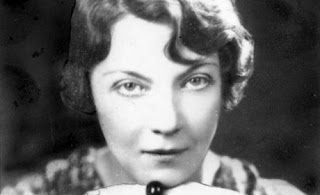 From the foreword of The Blue Hour: A Life of Jean Rhys, by Lilian Pizzichini:

"In the summer of 1912 the French parfumier Jacques Guerlain concocted a scent from musk and rose de Bulgarie with a single note of jasmine. He intended his new scent, which he called L'Heure Bleue, to evoke dusk in the city. The blue hour is the time when heliotropes and irises in Parisian window boxes are bathed in a blue light and the well-groomed Parisienne prepares for the evening.

"For the novelist Jean Rhys, the blue hour was also the hour when the lap-dog she saw herself as being during the day turned into a wolf. Dogs hunt best during twilight. Underneath our surface sophistication lurks a predator. Jean Rhys was always concerned with what lay beneath the top notes. In Quartet, her first novel, set in paris, a young female character, smarter and bolder than her heroine, is wearing L'Heure Bleue by Guerlain. Rhys's heroine absorbs the woman's scent as though in breathing it in she can capture her rival's self-possession..."


Though Jean Rhys published only a handful of books in a brief period of time, I've returned to her work more often than any other writer. I relate that strongly to her characters, always some poetic inversion of their author, always sad, alone but fighting against it, somewhat self-sabotaging, romantic but fatalistic, hopelessly dreamy, grafting onto the peeling, water-stained wallpaper of a Parisian flophouse images of high fashion, glamorous independence, the head over heels dizziness of ill-fated love affairs, all while remaining glued by inertia to the room's filthy mattress, waiting for dusk and perhaps a free meal.

Rhys herself was both fiercely independent and disastrously beholden to a series of not-so-charitable older men, the most notorious of whom was the writer Ford Maddox Ford. It was Ford who helped Rhys get published, which is to say organized. Her childhood in Dominica had ingrained in her a sense of elaborate languor bordering on laziness, at least as far as others were concerned. Getting her shit together was always a challenge for her, and I imagine a scattered heap of intuitively- if not technically connected notes and sentences before Ford came along, mixing encouragement with sexual attention. Naturally, he dumped her. Almost everyone did. People leave. Where's the motivation in that?

She was a woman of sharp observational powers, in possession of what seemed to be an inherently poetic sense of the world. The combination of these two attributes made for writing which is often so sad, so melancholy, so blue, that you think you can't get through it, so that the act of reading it replicates how Rhys must have felt about life and the world in general: too gorgeous and brutal for words. She is best known for her last novel, Wide Sargasso Sea, a reinterpretation of Jane Eyre. For me, her earlier novels are the strongest, the most unrelenting in their beautiful remorse. Start with After Leaving Mr. Mackenzie and work your way through to Good Morning, Midnight.

I was excited when The Blue Hour came out, because very few biographies on Rhys exist. After buying the book, I packed it in my bag for a recent trip to Italy. It seemed a good place to engross myself in Rhys' life, though her particular adulthood haunt was France. In any case, Italy is nearer than Memphis, and closer in spirit and tone. I've been obsessed with perfume for over a year now, relentlessly obsessed to some, and yet I had no reason to associate Jean Rhys with anything from that world and made no connection between the title of the book and the beloved Guerlain perfume. Reading the foreword on the plane was a moment of epiphany, because of course Rhys would have loved L'Heure Bleue. It makes perfect sense. It was perhaps the only fragrance for her uniquely lonely world view, but more than telling me something new about Rhys, the connection has opened my eyes about L'Heure Bleue itself.

Often described in a way which makes it seem sad and cool in an almost satirically quaint way, L'Heure Bleue is in fact magnificently, deeply melancholic, an unlikely, tense but simultaneously languid fusion of the medicinal and the floral, both edible and inedible. There is carnation against iris, itself enough contrast for a dozen perfumes, the warmth of tonka and vanilla working alongside a powdery detachment. It is spicy but sweet, powdery dry but dewy, a study in perfectly calibrated contrasts, so well blended that they cease to be contradictions; rather, a persistent sense of vaguely perceived oppositions precariously balanced into some sort of olfactory truce. This delicate balance is a wondrous thing, giving you the sense that to breathe the wrong way might send it all flying back into discord like dandelion fluff.

I went straight out to the nearest profumeria in Milan, where I purchased a bottle in EDP concentration. I need it with me as I read The Blue Hour, I decided, a ticket into Rhys's headspace. L'Heure Bleue reminds me of moments I've since had here in Lugano, Switzerland, where I've been staying for the last several days. A wall of windows in my host's apartment looks out over a parallel wall, higher and wider still, of softly sloping mountains. Buildings dot these, clustered at the bottom. Trees cover their angular reality with an illusion of cozy tenderness.

The city surrounds an enormous lake. I saw it up close as the train came in from Milano. I left Italy reluctantly, feeling somehow, somewhere, someone had gotten it wrong. I'd ended up in America rather than Italy, where I clearly belonged. My family came from Lucca over fifty years ago. What kind of mistake was that--and how had we paid for it? And now my life back "home" is so complicated, I reminded myself, that there's no getting out of it, and of course much of it I don't want to leave, making things more difficult, more confusing, more bittersweet. I thought of all I'd be losing in the imagined immigration back to Italy.

Lugano is impossibly pretty. There's a garden outside with a chaise lawnchair waiting for me as I write this. It's seven o'clock and the mountains have gone foggy, imbued with a faint cast of pale, powdery blue. They seem like an apparition, an embodiment of my conflicted feelings. My sadness has lingered into the visit. It got off the train with me. I stare out the windows into this beautiful landscape, seeing it through that sadness, and twilight, which should be descending any minute now, will erode the boundaries between this beauty and sadness even further, so that they seem one and the same thing, the differences between the two indistinguishable, something you can only live with, or through.

This is L'Heure Bleue for me. And, reading The Blue Hour, I think it was something like this for Jean Rhys, too. It's some kind of consolation, learning we have this in common.
Posted by Brian at 6/15/2009 11:40:00 AM

That was a becautiful post, Brian. You write real purty! ;-)

I wish I had the same experience of L'Heure Bleu. But sadly, I just get a shrill plasticy Note That Will Not Die. Oh well, can't win em all.

damn, it was apparently so beautiful I lost the ability to type correctly! But you know what I meant

That was so lovely, Brian. You do have quite a gift.

And when will we be blessed with YOUR novel, Sir? That was a gorgeous post!

Thank you for bringing Rhys to my attention; though I've heard of The Wide Sargasso Sea, she has pretty much been off my radar. I feel I need to correct that now thanks to your wonderful piece.

And L'Heure Bleue: it sends me into reveries that somehow border on tears. There's no better way to explain it. A very special perfume, and the classic Guerlain that speaks to me most deeply of those I've tried.

Definitely look for Rhys's work, Joe. It's wonderful. All four of the earlier novels are good. My favorites are After Leaving Mr. Mackenzie, Voyage in the Dark, and Good Morning, Midnight. The last one is particularly difficult. Rhys was at the end of her rope, and yet her observations about other people and the way things work are at their peak.

I have LOVED reading this post :) came here thru google while finding what "sillage" meant :)

L'Heure Bleue is next on my wish list...hope to get a bottle of the EDP as soon as that fall weather hits. In the meanwhile, I'm enjoying Chamade EDP. :-) Love them both.

After reading this, I had to run out and smell it. For me, no plastic, just a beautiful strong melancholy that makes me think of solitude as a state of peace. I'm thinking I might have to buy it.

Can't say how much I love your posts, and how in-tune I feel with them. When you first posted this, I had just received Wide Sargasso Sea in the mail from a used bookseller. I had ordered it not knowing anything about Jean Rhys; rather, I thought it was a book which I had somehow overlooked.

Of course, now I am aching to try L'Heure Bleue. None in town alas, so I shall have to hunt.

Hi Brian,
1st time posting but I've been reading for qite a while.
Everytime I read about L'Heure Bleue I want to go get a spritz. My PdT dates back to the mid '90s and I have an unopened perfume bottle acquired from an antique shop that I'm sure goes back to the '60s due to the packaging.
The scent is so prominent that I can't just wear it to the office, but I love it! It's like nothing else I know...