This Week at the Perfume Counter: Milano 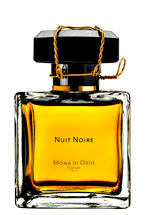 Before I left for Milan, Tuesday before last, I googled perfume shops in the area. I needn't have bothered, as there are perfume shops all over the place--in a week, I probably passed thirty, at least--but google brought me to Profumo on Via Brera, and another shop a few blocks down on the same street, so it wasn't a total waste.

Profumo is run by a man who seems to know what he's talking about, though he speaks only passable English. The place has the usual niche suspects (Malle, Diptyque) as well as the harder to come by: I got to smell some of the Lorenzo Villoresi line, the new Heeley, Parfum d'Empire, Mona di Orio, Keiko Mecheri, and Profumi del Forte, an Italian line, my favorite of which was Roma Imperiale, an addictively light but persistent Shalimar-influenced oriental with Bergamot, mandarin, neroli, rose-wood, coriander seed, cinnamon, tomato leaves, orchid, jasmine absolute, tuberose absolute, ylang-ylang, iris butter, Turkish rose essence, seringa, civet, oak moss, grey amber, vanilla, and sandalwood in the mix.

Of the Villoresi, I liked Piper Nigrum and Spezie, which were similar: peppery and robust. The feminine fragrances I liked less. I almost walked away with a bottle of Piper Nigrum, but, projecting ahead, I couldn't see myself reaching for it all that often.

I'd never smelled Mona di Orio either (the perfumes, not the woman). I might have passed altogether on them at first sniff. Luckily, I sprayed some on--Oiro to one hand, Nuit Noire to the other--and enjoyed the depth of their development on my skin over the next several hours. If, as Luca Turin wrote, Nuit Noire is a loud fart of civet, smother me in farts, please. A spicy oriental, it smells different on me at different times, sometimes powdery, sometimes leathery, first floral, then gingered. I've heard reports that di Orio no longer has a US distributor, which would be a shame. The bottles are as gorgeous as the scents.

I returned to Profumo about four times over the course of the next week, spending time with L'Eau Trois ( a nice, dry frankincense from Diptyque; has this been discontinued?), Fougere Bengale (Holy Immortelle!), Andy Tauer (Incense Rose and Lonestar Memories) and more of the Parfumerie Generale line (Coze, anyone?). Eventually, I purchased a bottle of Nuit Noire. Let's hope I can get it back safely in my suitcase.

Down the street was a shop specializing in Penhaligons fragrance. Abigail sent me a bottle of Violetta before I left the country. It's good stuff. So is Elixir, by Olivia Giacobetti. Company copy says Elixir was inspired by Hammam Bouquet, which I own and like well enough, but I'm not sure I see the connection. Elixir lacks the weird, slightly vexing plastic note of Hammam. It's spicier and has more depth. Osmoz lists the following notes: orange, eucalyptus, mace, cardamom, jasmine, ginger, rose, woods, resin, tonka bean, vanilla, and benzoin. All of this, save the jasmine maybe, is discernable to me. I wish Elixir lasted a bit longer, or persisted with the intensity of its opening, but those first thirty minutes might be worth the price of admission.

Aside from these shops I had the best time at 10 Corso Como. The eponymously titled house blend bored me, but there was a lot besides to enjoy. I'd never really given Byredo much of a chance. Pulp is fantastic, and the staying power is equally remarkable. I got to see the Comme des Garçons/Stephen Jones bottle up close, and bought one to take home. Is there a more unusual violet fragrance? Probably not. 10 Corso Como had all the Tom Ford Private Blends, and the Histoires de Parfums, which Abigail and I have been enjoying lately. It was the only place I found any Serge Lutens in Milano (with any kind of selection to speak of, that is). It had some Caron, though not much. Some By Kilian. Some Malle. Some stuff I forget. Mostly it was great to walk around the store, which sells outrageously priced clothes and jewelry, much of it pretty unusual.

While in Milan I also picked up some old favorites. Hermes Caleche EDP, L'Heure Bleue, and, joy of all joys, Clinique Wappings, which I might have gotten in the states but only after waiting until Christmas. At a remote Profumeria I found bottles of Knize 10, Knize Sec, Knize Two, and Knize Forest. I bought Knize Sec, which is an unusual smell I'll try to describe after spending more time with it.

The abundance of perfume in Milano was thrilling. But I was disappointed by how rarely I smelled any on anyone. Several times I passed women whose perfume left a trail of dreamy goodness behind. Not once did I pass a guy reeking of cologne, and I can't tell you how much I'd been looking forward to this. Mistakenly, I was under the impression that men here bathe in the stuff. I envisioned them standing at the sink, splashing eau de whatever into their open palms, slapping their naked chests. Invariably in these fantasies they were dressed in their underwear and flip flops. Then they made me ricotta pie and pesto pasta. Then we spent some alone time, and I got high, up close, on their cologne of choice. The closest I got to this kind of religious experience was the Duomo.
Posted by Brian at 6/14/2009 10:04:00 AM

Brian,
how big is the Nuit Noire bottle? You can carry liquids up to 100mls in hand luggage, which might be safer.

Sounds like you had a good old sniffathoin there. My sister visited Milan recently, sadly, it was closed! (Easter, most shops were shut).

I haven't noticed Italian men using a lot of cologne. Now Indians and Arabs, that's different. In India I noticed quite a few businessmen used cologne, and even old men often smelled of rose water. I've never been to the Middle East, but if the Arabian Oud shop in London is anything to go by, Arabian men like to use scent, too.

Now that's a fantasy I can live with.
I'm picturing one now in flip flops.

I hate to admit it, but I've never smelled Knize anything. I have to get on this bandwagon, as I've been at this for years and years.
Holds head in shame.

Thanks for taking us on the journey with you, Brian.

Ahhh....you're back....I wondered why you hadn't posted anything in a while.

Sounds like a fantastic trip, and I'm so glad to hear that you got a bottle of the Mona - I've been "jonesing" Nuit Noire for almost 3 years now.....maybe your splurge will inspire me to spend outlandishly this summer - especially if Mona's not going to be carried here in the States!!!!

And as far as the Knize goes - how very cool. I've had 10 for a while, but have really wanted to experience the rest of the line.....(sigh) - guess I'll have to live vicariously through your reviews for the time being.

The Nuit bottle is 50 ml. The problem is, I have something like ten bottles of perfume to take home. So I'll have to decide what goes on board with me. I'm guessing Nuit and something else.

I wore enough cologne for all of us in Italy.

I might be going back, depending on various things. I'm debating. Should I get another Mona, seeing as how they aren't available in the states anymore If so, which one? I liked Oiro a lot, but in a way it seemed very similar. After reading a little bit more about carnation I wish I'd given it more attention. Any suggestions? I think a good comparison with Nuit Noire is Bal A Versailles. I had very similar reactions adjusting to first impressions of both.

I was also thinking about looking for Santa Maria Novella's Nostalgia, which I've heard good things about. Sadly, it isn't reported to last long, so again I'm not sure.

Bryan, Knize Ten is so fantastic. It really is. It's harder to find in the US these days. It sits somewhere between Tabac Blond by Caron and Chanel's Cuir de Russie. Closer to Tabac, probably. Knize Sec is a strange thing. I like it very much but can't figure out what's going on in it. Some say champagne. I wasn't getting that at first but do increasingly. Plus some leather and tangy notes of citrus and cypress. Good stuff, and lasts well.

Hi Marko, I was writing my comment when you posted yours so didn't see it until now. Nuit Noire is great. Give me your recommendations for other Orios if you have any?

I haven't posted in what seems to me like forever. The blog is something I'm so tapped into, channeling every day and all my thoughts through posts about perfume. I've missed that connection over the last month. Nice to know my absence didn't go unnoticed. I know Abigail has noticed, being the only one to post during that time. It's like yin without yang.

OK then, use lots and lots of bubblewrap! And (my trick for liquids in check-in luggage) put them in ziploc bags, too. That way if anything leaks, the damage ought to be minimised.

I've never actually sniffed any Mona perfumes. You have intriqued me. I wonder if they are available in the UK?

I'd love to steal your fantasy, Brian, but may I have him in leather sandals rather than flip-flops?

Brian,
a late addition to this post - I now have Nuit Noir.

Liberty have their Mona D'Orios on half-price sale - prior to no longer stocking them, I suspect. So I got Nuit Noir and Carnation. I'd have got them all (they also have Amytis and Oiro) but my credit card bill will be scary enough as it is.

I haven't worn Carnation yet, but am now wearing Nuit Noir, and my God, it is gorgeous! Luca can go hang. If this is a civet fart, then like you, I want to smother in it..... ;-)

WOW, Tania, those are the exact two I got. I like Carnation a lot and will be interested to hear what you think. Nuit Noire reminds me of an updated Bal a Versailles. Actually, it's pretty old school, so not that updated. Luca Turin talks about some interesting Chinatown-like resemblance in the opening of Carnation. I happen not to adore Chinatown but Carnation for me does resemble what I wish Chinatown would be every time I smell it. What's going on with di orio? Sad she's losing all her distribution. These are interesting perfumes. Challenging, but no more so than a lot of other niche fragrances which seem to do well.

I don't know why she seems to be losing her distributors, it is such a pity. And yet Liberty are still stocking Ineke, which I think is not as good (I tried Chemical Bonding, it's dull and reminds me of about five other perfumes).
I adore Carnation, I just wish it lasted longer on me! But I bought the 100ml, so I guess I can spritz with abandon. It's just as beautiful and surprising as NN, but it's so soft and warm. I wore it to bed last night, it's that kind of scent.
Now I really am curious about the others, and wondering if I should make another trip to Liberty.... ;-)

Do you remember where you found Knize sec?