Perfume on Film: The Women 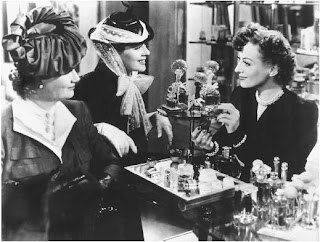 The other night, I watched The Women. Has anyone ever seen it? Rosalind Russell, Norma Shearer, Joan Crawford, and Joan Fontaine preside over the salon, the department store, the dinner club, the dressing room, the living room, the kitchen. There isn't a single man in the whole film--not in the flesh, not off screen, not even a disembodied voice on the phone, but men of course play a crucial role in the proceedings, just as the tag line promises. The Women: It's All About Men!

Norma Shearer finds out from Rosalind Russell's manicurist that her husband, Steven Haines, is seeing shopgirl Joan Crawford. First Shearer fights to win him back, then she caves. She divorces him, and he marries Joan (Crawford, not Fontaine) who cheats on him with a man she thinks is wealthy (in fact, he's kept himself). Meanwhile, busybody Russell, who from the beginning of the story has thrilled at the slightest misfortune of others, is dumped by her husband for Paulette Goddard. She finds this out in Reno, at a recuperative ranch, where all the women migrate, post divorce.

One of the best scenes of the film is set at Crawford's place of work, the perfume counter of Black's Fifth Avenue. The movie was adapted from a play by Clare Booth Luce, which openly refers to Saks. I'm guessing Saks didn't take kindly to the suggestion it employed women of questionable repute; thus, the name change. Blacks, Saks, or otherwise, the scenario says a lot about the various social intersections revolving around perfume, intersections which don't occur at the cosmetics counter, pretty exclusively the domain of women.

A man goes to the counter to buy his wife a present. Summer Rain is the latest thing. An enormous display features the decorative, umbrella-themed bottles. Every woman who passes has heard of the stuff. To have it is to be what it says it represents. To buy it and present it is to bestow luxury, glamor, sex appeal. The shopgirl sees that her male client cares enough to buy the very best, which is actually probably crap, meaning that in addition he is also very impressionable, easily led. She leads him astray. Wifey gets Summer Rain. Shopgirl hits the jackpot.

Gossip Rosalind Russell visit Blacks to investigate, hiding behind the Summer Rain display to spy on Crawford. Joan has just been on the phone with Steven Haines, playing him like a fiddle. He was calling to cancel their dinner plans (the assumption being, dinner is at her place, which was bought and paid for by him) but she can't allow his interest in her to go interrupted, so in her best little girl voice she declares it happens to be her birthday, and he changes his mind.

Crawford has no idea who Rosalind is, so Rosalind makes sure she knows. It doesn't change anything, because Crawford's "Crystal Allen" has no conscience, thinking only of herself and her feelings. Any man is fair game. Norma Shearer shouldn't have fallen asleep at the wheel. Rosalind and her friend comment on the fact that Mr. Haines must have been in the store, because Mrs. Haines owns a new bottle of Summer Rain. They would very much like to smell it, they say, so Crawford sprays some in their faces.

Perfume is secondary to the plot and ultimately has nothing really to do with anything in any specific way, no more than the fashion show which occurs smack in the middle of The Women, a sudden burst of technicolor in an otherwise black and white film. But seeing perfume at all in the story made me realize how much I'd like to see that kind of content in other movies, and how rarely I do. It also made me realize, when it comes to perfume, how many different things there are to explore thematically. Perfume weaves in and out of our lives in ways most of us don't even think about. Smells attach to memory and become an essential part of who we are. In The Women, Summer Rain defines a version of womanhood. If your husband gives it to you, you're loved. Owning it, women become charter members of a fantasy lifestyle, where maids prepare fancy meals in the kitchen, children are on their best behavior, a dress fits in such a way that the woman wearing it looks like no one else who owns it, and kisses don't feel rushed or perfunctory. In real life, perfume has been working the same way ever since.

Sometimes you see some bottles featured on dressers. for instance some Guerlain (of course) bottles in Belle de Jour with Catherine Deneuve. And in Casino Royale there is a quick shot on a bottle of Melograno by SMN.

I've been racking my brain and the only thing I can think of is the 60's musical "She Loves Me" - it's based on the play "Parfumerie" by Hungarian playwright Miklos Laszlo and takes place in a perfume store in Budapest. The play has been made into films in various incarnations before and after it's stint as a Tony Award winning Broadway hit (and revival):

Hope this is somewhat helpful?

I love "The Women", Roz is so great in it, and Norma is lovely. Jungle Red!!
I haven't seen the following, but a quick search on iMDB yielded this gem: "The Perfumer (1997) Edward Pinchbeck, a thirty five-year-old professional perfumer, owns a modest perfume boutique, lives alone with his pet parakeet and enjoys discussing the virtues of pheromones and musky secretions. Extremely shy around women, Edward is secretly in love with his overpaid and underworked store clerk, Daisy, who remains steadfastly uninterested in him. Edward's drab life drastically changes when, one day, he stumbles across an orchid with an astonishing scent. Determined to get a cutting from the flower, Edward is thwarted by old acquaintance Millicent Hedgerow, president of the local flower society, and her officious German secretary, Roland Kemp. Undeterred, Edward finally succeeds in stealing a piece of the orchid and, a few weeks later, concocts a perfume from its petals. The new scent, however, is an aphrodisiac with an overpowering effect on those who are exposed to it. Edward, now irresistible to men and women alike, unleashes a series of sexual misadventures involving Roland, Millicent, Daisy, her biker boyfriend-and a group of orgy-minded customers who invade Edward's store. Written by Gilbert Noreau"

What a great post, Abigail. The '30s is my favorite decade for movies, and THE WOMEN is certainly a great one.

Pefume is featured in many classic films, but at this moment I can recall only a few. One is from James Cagney's PICTURE SNATCHER. In one scene he is entranced by a moll's lavender fragrance. So later his pals give him a huge bottle of lavender bath salts, and he obligingly takes a bath in them.

In THE LADY EVE Henry Fonda is so enchanted by Barbara Stanwyck's perfume, it makes him dizzy. I have no idea what she's wearing, but whatever it is, it's fabulous.

In BOMBSHELL, Jean Harlow's character has a staggering collection of perfumes in her bedroom, and in one scene she takes a lot of time choosing just the right one. Any recognizable bottles? Not that I could tell. But it's an interesting scene just to observe the kinds of bottles on her bureau.

1932's TROUBLE IN PARADISE is an absolute joy to watch. It's a pre-Code comedy starring Kay Francis and Herbert Marshall. Kay plays Mme Colet, the owner of a fragrance House. And while perfume doesn't play much of a role in the movie, it's there all the same.

BTW, in stills for THE WOMEN, you can clearly see in the dept store scene a bottle of Shalimar.

The example which immediately springs to my mind is Scarlett O'Hara gargling with cologne to hide the fact that she's been drinking from Rhett.

There was 'Rebecca' - but I can't recall whether Rebecca's special bespoke perfume was in the film, or only in the book! Great, an excuse to watch it again.... ;-)

These responses are so great. Thanks all. It's crazy: I zero in on these fleeting perfume appearances in film. I see the bottles and try to identify them. Even on the Home and Garden channel. Once while watching House Hunters I saw perfume bottles in one of the bathrooms the featured couple was looking at, and I was so excited to see that unmistakable Kenzo Flower bottle and a few others on the shelf. Marko, I've been reading things about The Shop Around the Corner, oddly enough, tough unrelated to perfume.

Queen_cupcake! I went right online to search for The Perfumer, with no luck. I must see that film. Where did you see it?

Cagneyfan, I can tell by your screenname that you're a close reader/lover of film. My kind of perfumista. I will check out all of those films. Thanks so much for taking the time to list them.

Brian, I am so sorry. I had a brain blart and addressed my response to Abigail instead of you.

I hope you have a chance to watch those films I listed. They're all great cinema.

Thanks again for a great article!