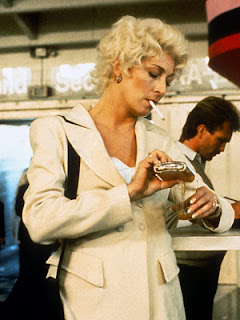 About a year ago, I was sent a decant of Midnight Violet. I didn't know what to make of it then--I still don't--but it prompted further exploration of fragrances by Ava Luxe and has remained a go-to scent for me ever since. As with any other line, there are stand-outs, some I feel strongly about, some I could do without. Some last; others don't. Midnight Violet, at least, has exceptional longevity and projection. At one time, the notes were listed as follows: violet, blue iris, orris, earth, black hemlock, galbanum, pink pepper, cinnamon, cedar, sandalwood, incense, wood balsam, moss, civet, and cashmere musk.

I say at one time because Midnight Violet seems to have been taken out of production, either permanently or for the time being. Some of Ava Luxe's scents are still available on the line's etsy page, though only in perfume oil concentration. I know that The Posh Peasant still stocks Midnight Violet, but the thought that it might one day be a thing of the past has inspired me to reconsider it with renewed interest. I was shocked to find that I've never reviewed it, or really any Ava Luxe fragrance in depth, especially given I like them as much as I do.

Midnight Violet is really about the hemlock, cedar, violet, and galbanum for me, and while it's said to be, and seems to be, an earthy violet, its camphoraceous qualities imbue it with a sense of the otherworldly, the slightly transitional, which might be where the name comes in. Abigail characterized Midnight Violet as a nighttime walk in the woods. I get that. More specifically, there are shapes shifting around in the darkness--maybe hallucinations, maybe not--and the moon casts just enough illumination to make you wonder. Like Ormonde Jayne Woman and Man, Midnight Violet is ultimately something simultaneously unsettling and settled, with a strange, eerie calm that should be but isn't at odds with its vibrantly outdoorsy aroma. Midnight Violet is more robust by far than all things Ormonde, but it shares some of the heightened tranquility of Ormonde and its sense of the mystical .

I wasn't a huge fan of Biba, another Luxe fragrance I didn't understand but had no real drive to. Queen Bess is a more than decent spice rose. Madame X was a bit too something or other for me, resulting in a bothersome distraction on my skin. I do like Cafe Noir, very much, and have written about it briefly elsewhere. However much you like or dislike certain Ava Luxe fragrances, however, there's no denying that for such a small outfit, the line has managed to create a distinct sensibility for itself, not just through the fragrances and the names chosen for them but through the imagery and strategies employed by the brand.

The line is a sincere and persuasive expression of its creator's interests and influences in a way (and to an extent) which is unusual for an indie perfumer--let alone niche or mainstream. The art nouveau motifs, the Hollywood glamour photos, the Vargas-like illustrations: together these form a filigreed, retro presence which, while borrowing from the past, creates something singular and entirely new, walking you into a world the fragrances embody. That sensibility provides you with a framework with which to evaluate the line.

Film Noir is one of my favorite leathers and another Ava Luxe fragrance presently unavailable on the line's etsy page. While Film Noir doesn't have Midnight Violet's forcefulness and seems to last a fraction of the time, I'm not bothered. The frame of mind it puts me in is solid enough to carry its own weight once Film Noir leaves the building. Sadly, the little bottle I have could be my last; not even The Posh Peasant, which has a pretty extensive selection of Ava Luxe, stocks this one.

Film Noir is unique in the category of leathers, as far as I know. Unlike Lancome Cuir, Balmain Jolie Madame, and Chanel Cuir de Russie, there's no underlying presence of violet or iris. Which isn't to say Film Noir is heavy on the birch tar. What I'd put it closest to is Donna Karan Signature, another favorite of mine. Like Signature, Film Noir is a bright leather with a lot of levity to it, an unusually fresh astringency in the top notes and the heart. If the Chanel and Lancome leathers are seated on a worn saddle for a horse ride through a field of flowers, Film Noir is out amongst the pines; where they are languorous and mellow, Film Noir is the bright white of an old crime thriller, its heroine's (or femme fatale's) overexposed face, secrets lurking under a deceptively straightforward surface.

Some people have seen a discrepancy between the perfume's title and its smell. It isn't that there's no darkness in Film Noir, no shadowed areas. It's more that the mysteries hide themselves in broad daylight, where they're least expected. Film Noir smells of new leather gloves and a purse into which have been thrown keys to hidden rooms, phone numbers scrawled on matchbooks, revealing photos and companion demands for money, a smart little handgun perfect for fitting under one's sleeve, and an embroidered handkerchief smelling as much of the man whose company it just left as the woman who carried it away. Were I to compare it favorably to another contemporary leather, it would be Rien by Etat Libre D'Orange. The two aren't similar at first glance (Rien is notably more pungent, with incense in the mix) but they're exploring similar territory, a region where leather is as apt to come into contact with concrete and metal as flowers and fields.

I hope that the removal of Midnight Violet and Film Noir from rotation is temporary, for your sake as much as mine. In a sea of uninspired dross, they're worth owning. These two alone show both the range and the consistency of the line. At first glance, they might seem world's apart. It helps to picture Midnight Violet as the forest Film Noir's femme fatale leads a detective into, where he tries and probably fails to read her face in moonlight thatched by overhead branches.

I couldn't agree with you more Brian - Film Noir is a fantastic leather (probably my favorite), and the thought of not being able to ever smell it again (when my small bottle is gone) is unthinkable.....is it asking too much for you and Abigail to somehow kidnap Serena and force her to make multiple batches of Film Noir for The Posh Peasant? I know it sounds rash, but desperate times call for desperate measures.....

I have enjoyed/loved many of her fragrances - in fact, it's her line of perfumes that began my love affair with fragrance - no surprise that many of her fragrances hold a "special place" in my collection/heart. Midnight Violet is also one of my favorites, as well as Cafe Noir, Neroli Blossom, Chypre Noir, Sweet Absinthe, and Hong Kong Garden (which is the closest thing I'm ever going to get to a "Holy Grail" scent).

What a nice co-incident, Midnight Violet and Film Noir are also among my absolute favourites from Ava Luxe.

Unfortunatly I discovered her wonderful perfumes a little to late when it now seem like she wont make them any more, so all I´ve got is half empty samples of Midnight Violet and Film Noir!

I really cross my fingers that she´ll be back in buisness again (as usual) or with a bigger selection of the oils.

Nice reviews also, made me want to go and use up the tiny amount I´ve got left...

I've heard she has stopped making the eau de parfums , but we can hope she changes her mind .
I love Chypre Noir , Kama , Kretek , Loukhoum , Moss....

Film Noir is what I consider a very green leather; it is a beauty.

I'm a huge fan- although not all scents fit like a glove, her work stands on its own-
And the lady herself is a treasure.

Count me among those who lament their late discovery of the line. I managed to sneak in a purchase of Moroccan Mint Tea before Serena discontinued it, and through the mighty fleabay I've secured a bottle of my second favourite No. 23. Other than those two I haven't found any great loves, but each and every scent of hers I sampled was interesting, different and worthy of my attention.

Side note: the other day I sampled Profumi di Firenze's Sandalo Indiano, and it instantly reminded me of Film Noir in its medicinal leathery vibe. Worth a try for its fans, perhaps.

Hey Marko, how have you been? I don't think we can kidnap Serena, sadly. I wonder why she stopped making the edp and what her selection process was for which were continued as oils and which weren't.

It's interesting: I too heard about her pretty early on, before any other indie perfumers reached my radar and even before many niche lines. Abigail was nice enough to share a few vials with me so I could smell her favorites.

She didn't have Film Noir and the reviews on basenotes were mixed but when it came to making a purchase that one really spoke to me. I already knew I wanted Midnight Violet and Cafe Noir. I was a little sad though, when I received Cafe Noir, to find that it was slightly different than the vial I'd smelled. There was less lavender, more coffee; an interesting illustration of how little it takes to make a difference in a fragrance and take it the other way.

Oh boy. Now I'm going to have to get the Hong Kong Garden oil. Why did I never notice this before? Fooled by it's name, probably. I hadn't realized it's an iris. Tell me about it?

I love reading a review that rekindles my fascination with a scent, so I'm happy to write one that does the same for you.

I'm going to have to try chypre noir. What's it like, waftbycarol? I don't guess I really ever read up on this one either.

chayaruchama! Yes, that's it, a green leather. It has some of the quality of Private Collection, now that you say that, though PC is in no way a leather. After saying it didn't last long I kept smelling it on my arm all day, of course. I think it might have been more apt to say that it keeps closer to the skin. Congrats on getting an agent, by the way.

Thanks for the tip on Firenze, Arachne. And what of No. 23? How does that smell?

I certainly hope Midnight Violet is not gone for good, I adore it, and it is truly lasting, something uncommon for a violet scent. I also adore her Chypre Noir and Venus Sands.

No. 23 smells like a femme'd up version of Tam Dao. I own and love TD, and have long debated if I could justify owning both - they're THAT similar. In the end, I caved. Happily.
Reviews of no. 23 abound on the internets, by the way, I think it was her bestseller.