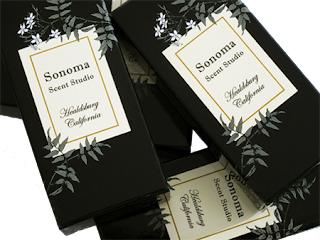 The past few days have left me in a bad mood. Sometimes I turn to big, billowy fl-orientals when I'm down, as a sort of olfactory armor to make people leave me alone. But other times I want something cuddly and warm, something that takes care of me, gently.

I've mentioned before that one of Brian's sayings is "one can't have too few skin scents" and I thoroughly concur. But I broke my anti-skin scent rule by loving Barbara Bui Le Parfum. So maybe I was ripe for another skin scent to waltz along and win my heart. I ordered a few fragrances from Sonoma Scent Studio to have at The Posh Peasant. Several I knew I would love but a few were meant for decanting purposes. And, just for the record, I live in fear of being stuck with all this perfume at The Posh Peasant one day, that nobody will buy it, so I try to only purchase things I like. But I must buy perfumes for other's tastes, hence, Sonoma Scent Studio Opal.

Opal is described by the perfumer, Laurie Erickson, as a vanilla musk. A comforting, warm and sweet scent. Something entirely inoffensive and safe. Sounds utterly boring if I'm being honest. It took me about a week to even smell Opal. But yesterday I needed something comforting and the bottle was literally staring at me so I tried it. Wow. It *is* comforting, warm, safe and inoffensive but it's also downright cheerful, delicious and sexy. I find Opal powdery. But it's the sort of powdery quality I love, an illuminated from within sort of gorgeous powdery aspect. It's a vanilla-musk-sandalwood but the vanilla is that sort of fluffy powdery vanilla and not a foody one. There's also a hint of bergamot and ambrette giving the overall scent a jab of freshness so it's not all vanilla-musk-blah-ness. You might compare Opal with Creative Scentualizations Perfect Veil but I find Opal far superior. Opal is less sweet and more potent with a higher quality sandalwood note. A few hours after applying Opal for the first time I went back and spritzed myself again - at least 4 times. I wanted to be bathed in it. Instead of "Calgon take me away" this was "Opal take me away" and it did.

So now I have 2 skin scents in my arsenal. And the beauty of Opal is that it's potent. One big turnoff with other skin scents is that they're fleeting. Like all perfumes from Sonoma Scent Studio, Opal is highly concentrated, virtually parfum strength I believe, and it lasts forever.

Sometimes perfumes call to mind a specific person, celebrity or character and Opal makes me think of Nigella Lawson. Nigella is gorgeous, feminine, soft but also incredibly sexy. I can't seem to watch her cooking shows, though, because they are all about her beauty and not about the darn food. 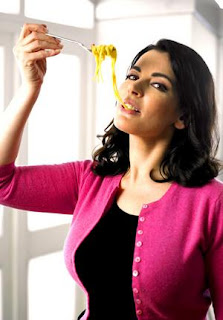 The other gem from Sonoma Scent Studio is Femme Jolie. Now I purchased Femme Jolie knowing it was my type of thing. And that it was. I read on SSS's website that Femme Jolie is back by popular demand for a limited time. According to the perfumer, Femme Jolie is a long-lasting cedar scent composed of woods, soft spices, musk, fruits, and florals. Notes are ginger, cinnamon, clove, plum, peach, orange blossom, violet, cedar, sandalwood, vanilla, musk. The floral notes are soft and subtle while the cedar and spices are more prominent.

Ok, seriously, if you love woods and spices you've got to get some Femme Jolie. This is Serge Lutens Bois et Fruits and Feminite de Bois but better. I've said this before and I know it's probably taboo but I find Sonoma Scent Studio's fragrances on par if not better than the big boys. Femme Jolie is an extravaganza of soft woods and zesty spices. I love the undercurrent of ginger, cinnamon and clove. It isn't heavy in the least and swirls about you in a light, yet potent fashion. The quality of the cedar and sandalwood the perfumer uses is simply divine. Femme Jolie is fantastic stuff.

Good to know about Femme Jolie, especially if it's there only for a limited time. It sounds exactly right to me.

I agree, SSS perfumes are on a par with the big boys! Me, I love Vintage Rose best, but I have a few others and they are all gorgeous. In fact I'm sampling Opal and Femme Jolie at the moment.

Well, dang it... yet another SSS to lemm. I have Velvet Rose; I really liked Sienna Musk and Champagne de Bois; Laurie is (squeee!) tweaking Tabac Aurea to tone the patchouli down, just for patchophobic me, so TA will be coming my way soon too.

Opal still doesn't grab me - I have vtg Emeraude and Shalimar Light Blue Juice, and that does me for Comfort Scents Wearable In Public.

I really like FdB, but it does this disappear-reappear thing on me (musk anosmia??) so I don't own any. Prefer Dolce Vita anyway - but perhaps I should try Femme Jolie. I agree, Laurie's scents are beautifully done, no hint of Junior Chemistry Set or Kitchen Aromatherapy clumsiness about them.

Tabac Aurea is on my soon-to-buy list, and after your review I'll add a sample of Opal to the order. I've sampled Vintage Rose, Velvet Rose, and Wood Violet; although I can appreciate that they are well-done, they're not me. As for Femme Jolie, the problem with me & woods fragrances is that I start smelling like a cedar closet, with a few mothballs thrown in for good measure (see: EL Sensuous). I'm taking it you don't get this effect from Femme Jolie?

Another beautiful review of Laurie's work. I'd love to see her brand thrive as more people start to realize that the quality and creativity of SSS far outstrips its modest price point.

You've got me all curious about Femme Jolie, even though it has "femme" in the title. Cedar and spices with toned down florals sounds like a recipe for Me-Likey!

I can blame it on you that I just bought a big bottle of Femme Jolie (unsniffed) and the Shea Cream as well. I am not much of a skin scent person, either, except for Barbara Bui, but this sounds divine...perfect for the holidays, I hope!

I love Laurie's work and I'm happy to give her business. I have Fireside Intense on one wrist and wonder whether I need a bottle of that as well...

Laurie Erickson is a very talented perfumer, and a really nice person to boot. I ADORE Velvet Rose (the rosiest rose EVER) and got hundreds of compliments when I dashed all over London wearing Lieu de Reves. Her Voile de Violette is also among my favorites, but I love big florals.

Champagne de Bois is a perfect winter scent as well.

Tania,
I've never sniffer SSS Vintage Rose. Now it's a must. I have Velvet Rose which is the rosiest rose ever, love it.

Patty,
I know what you mean about Cedar+mothballs! I actually get this from SL Bois de Violette of all things. When I've worn SL BdV I've often thought "why didn't I simply store my sweater in that cedar lined trunk I have?" because that's all it is. SSS Femme Jolie is MUCH more than this cedar closet effect. She's got ginger, cinnamon, clove, some fruits and a background of florals to soften it up a bit. I bet you'd like it.

Nathan,
Femme Jolie is decidedly not just "Femme" - on a man it would be fantastic.

Andrea,
Voile de Violette rules! It's such a juicy plummy violet. Have you tried her Wood Violet? Definitely beats SL BdV for me (another blasphemous statement from me!)

Hi Abigale,
Vintage Rose is not for everyone, as a recent thread on NST reveals. Happily for me, it is my favorite among all the SSS fragrances that I love. It's a delicious, deep vintage liquor that's aged in the cask along with tons of dried rose petals. I hope you will find the beauty in it to love.

I just received Fireside and Tabac Aurea, and after sampling Femme Jolie, Sienna Musk and Opal last night, I am now lemming FJ and SM. Opal was very similar on me to Profumum Alba, which I already have. As for the comparison to SL Bois et Fruits, I have to say it is very well done - I haven't compared them side by side but I was impressed when I sniffed it at how well-rounded and rich it was. I also love her 1 oz bottles, makes her scents so accessible!

Gonna have to try these one of these days! Thanks for the reviews.
Laura M

I am very happy to see more reviews and praise for SSS fragrances! While Opal disappears on me after a while due to musk anosmia, the opening is very lovely and light warm (non gourmand) vanilla. It is often tempting for me to have some anyway as I enjoy it so much while it lasts! But I love love love SSS fragrances anyway! I adore Rose Musc, Tabac Aurea, Lieu de Reves, Femme Jolie, and Voile de Violette!

I've been wearing Femme Jolie since last spring and it is one of my go-to fragrances. It is so lovely, and it could be worn by the right man too! It is very warm and rich, yet light. And it lasts forever. For those of you wanting more comparison, I think it smells like the super yummy base/drydown of DK Chaos.

And I agree completely that SSS fragrances rival some of the other master/niche houses. Laurie puts so much thought and time into her fragrances, and she really cares. Her price point is amazing for the quality of her fragrances - she can maintain that by not selling her fragrances at boutiques which adds cost, and also by doing just about everything herself! Yes, from development to bottling and sending it out the door, she does it all herself. Laurie is a true artist and she really cares about the craft and business of quality fragrance. She values each of her clients. I encourage fans and the curious to take advantage of the small 5 ml bottles she is offering during the holidays!