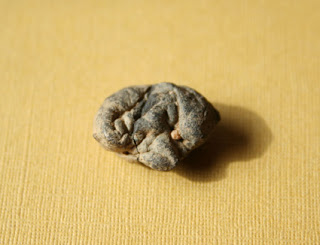 What I love most about Fier, I think, is its oddball piquancy, a totally unexpected spark of citrus which makes no rational sense but smells so good--and so right--that it seems practically inevitable. It also endows Fier with the effervescent booziness of a bubbly gin fizz. Fier reminds me of other favorites--Kolnisch Juchten, Etro's Palais Jamais, Le Labo's Patchouli 24, and Santa Maria Novella's Nostalgia among them--all of which have something to do with tea and/or birch tar. The associations are vehicular: I get leather upholstery, petrol fumes, and rubber, primarily. But Fier doesn't shock me much. A friend of mine smelled it, smiled, obviously pleased, then screwed up his face and asked why someone would want to smell that way. Why do people want to have sex, I answered. Because it feels good. It certainly isn't pretty, or comfortable. Maybe it's the company I keep, and for others sex is something like a Lazy-Boy recliner, worn in all the right places. I smell Fier, and other birch-centric fragrances for that matter, and my mind goes somewhat sybaritic. It conjures complicated pleasures, not all of them sexual, though some are decidedly base.

Spending a few days with Fier, I decided that what at first seems like an unlikely addition to the Annick Goutal line-up isn't really all that out of character. Goutal's masculines have always been pretty unusual. Think of Sables, which smells of sugared burned leaves and woods. "Vetiver" takes a rustic approach to its signature note. Even Eau de Monsieur slants further away from a traditional masculine than its opening notes lead you to believe. Those fragrances date from the eighties. In the last several years, Ambre Fetiche , Myrrhe Ardente, Encens Flamboyant, and Musc Nomade have continued that trend toward the slightly unconventional. More unusual are the distinct differences between Goutal's male and female sensibilities.

I find Fier a more realistic day to day wear than Nostalgia and Palais Jamais, both of which are a little too robust for the polite society of office cubicle and water cooler. Nothing too shocking here. Just pure pleasure. That citrus really tempers the birch in unexpected ways. I imagine this is what Bond No.9's Wall Street was meant to be, and might have been, if cucumber and seaweed hadn't talked pretty to it.

It's great to see so many posts this week. I keep track of two--and only two--perfume blogs: now smell this and you guys.

I enjoy the reviews and am impressed by how much ground you both have covered in just a few years.