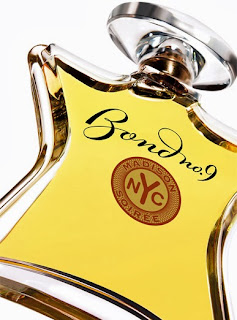 Is there a more derided niche house than Bond No. 9? I'm tempted to say no. The brand's infamously aggressive tactics - with consumers, with retailers, with critics - have earned it a special place in the hearts and minds of people who write about, talk about, and sniff perfume: first there was criticism, then, more recently, silence. The increasingly outrageous pricing hasn't helped, nor have the endless series of flankers in all but name, a long line of perfumes which share the basic DNA of drugstore shampoo.

It's hard to see, at this point, what's any good, as opposed to what is merely mediocre, in the line. Some tell you it's all mediocre. I'd say a lot of it is. But there are some good, even great, perfumes to be found there. And none of this probably hurts the company anyway, judging by a recent trip to Nordstrom, where even the least interesting Bond fragrances seemed infinitely more compelling than the majority of the department store's increasingly narrowed down inventory.

Here's a list of my highly biased picks for good, bad, and otherwise:

A just right combination of patchouli, cinnamon, and civet, with the balls out feel of pre reformulation Givenchy Gentleman and Giorgio for Men. Some have commented that you might as well pay a fraction of the price for still-in-production Gentleman or Giorgio, but in my experience they aren't half as rich or satisfying, however superficially similar. H.O.T. Always was composed by Maurice Roucel, as were a number of other earlier Bonds, such as the also good Riverside Drive and New Haarlem, and the fantastic...

Probably my pick for favorite, Broadway is, like H.O.T., quintessentially American in its cheeky, verging on overkill attitude. Amber, rose, vanilla and violet create the general outlines of the fragrance. It's a good time gal of a scent, not overly preoccupied with sophistication, if by sophistication you mean something like understatement. Broadway is radiant and strangely succulent, as if all its ingredients were set on impersonating berries they'd only ever actually seen in movies.

Unlike the more recent I Love New York for Holidays, Manhattan feels like something created with this time of year in mind. Too much for some, it seems just right to me. Gingerbread and honeyed chocolate could go very wrong, but something in the mix (jasmine, patchouli, plum?) puts them in check. In my favorite Bond's, there is often a "just so" quality - the sense that with one more minor tweak, everything might have gone horribly awry. There's an audacity to that high wire act that I really like, and Manhattan is one of the only recent Bond's that revives that spirit of risk.

It's on the expensive side, even for Bond, but New York Oud is hands down my favorite oud fragrance, and given that most of them are ridiculously overpriced, even compared to this, Bond's entry is a steal by comparison. When I tell you it's my favorite I imagine you will say to yourself, yeah, but has he smelled...(fill in the blank)? It might be hard for you to imagine this is the favorite of anyone who's smelled all the wonderful offerings that are OUD. So I should tell you I'm pretty sure I've smelled most of these now, and while some impress me, and some have even persuaded me to the point of purchase, none come close to New York Oud in my affections. Having worn it for over a year, I can also tell you I think it's worth every penny in terms of projection, tenacity, and likability. To say it's nothing more than rose, oud (or what, more likely, passes for it in most of these scents), and patchouli is like saying A sunset is basically the sun and the sky. Bond No.9 Signature is very similar in certain respects but not nearly as fantastic.

There are worse things, even at this price, but Cooper Square gives them a run for their money in terms of disappointment. A pronounced juniper note never really goes away - not a bad thing in itself, but everything just feels at odds in this fragrance for me, and bombastic juniper, devoid of mediating skills, struggles to keep the peace by drowning all else out. It feels like every masculine known to man, just in case whoever comes to pick it up from the airport might mistake it for anything else and leave it stranded with its considerable baggage.

A dead ringer for the milky chypre Madame Rochas, for a time, Soiree is the life of the party for all of five minutes, before it buttons down and sulks into its overcoat on a low chair in the very far corner of the room, a very sour look on its face.

Great, if you could wash your hair with it, and you lived on a planet where 3 ounces of shampoo at this price made anything close to sense. Fashion Avenue is one of too many shampoo Bond's to count. Count them yourself if you like. I get them all confused.

Maybe Le Labo can get away with a patchouli scent which is anything but patchouli, but Bond has its reputation working against it, and Le Labo is often at least giving you a new way to think about the note in question. NY Patchouli is part of Bond's more recent line of even higher priced fragrances. A few of these (New York Amber and New York Oud, specifically) are good enough to let pass. New York Patchouli is a sticking point. It's so generic it doesn't even smell like much of a fragrance to speak of.

If not for the price, I would put this under Good. I actually really like this take on Amber, and it has good projection and longevity. At first glance, it was foul. It grew on me until I found myself carrying it around throughout the day. Not that it takes much re-applying. I file Amber under Fugly because for me it represents a downward trend with Bond. To single Bond out for it's over-production and outrageous pricing is a bit disingenuous, as these are industry wide practices. But Bond seems particularly egregious to me. They release far more than they should, too many to keep track of, and escalate their pricing so frequently and seemingly arbitrarily that it strikes me as transparently hostile toward their consumer. Amber is a useful case in point because I believe that, were Bond not conducting itself this way, and actually took the time to focus on a fragrance like Amber properly and realistically, more people would know about it and recognize it as a good, maybe very good, fragrance. Instead, it's lost in the shuffle Bond itself initiated and continues to cultivate.

Where to begin? I'll not and say we did.

The Scent of Peace, like Nuits de Noho, is by all accounts a good seller for Bond. When I meet someone who doesn't know much about Bond, they do tend to know about this one, and they want it. Peace for Him, aside from being totally unnecessary (what, for instance, makes the original particularly feminine?), manages to call its predecessor into question, prompting reevaluation. Will the guys buy it? Probably not, but I think their girlfriends will. Something in this fragrance sticks out like a sore thumb, screaming half finished and rushed for rushing's sake.

The ingredients: lavender, powder, and a neon sign that reads My Parents Went to Bond No.9 and All I Got Was This Poor Excuse For a Fragrance.

I think it say something that I like Broadway Nite, maybe enough to buy, but my overall annoyance with the brand prevents me from adding it to my wishlist. (Well, that and the fact that there are other good smellalikes for it.)

Yeah, it's a problem. For me, some of those earliest Bonds especially, were/are so good, and yet to even approach the counter is...a mental ordeal? What scents do you find are similar to Broadway Nite? I like it so much that nothing seems to come close for me.

I think that Tauer's Rose Vermeille kind of covers the same territory for me, and maybe does it better. Although - to be frank, I've drained my samples of both, so it's been a while since I smelled either.

Thanks for this post. It's rare to see someone posting such a long article on blogs these days- most people just write a few sentences and point a link somewhere else. This is original for once.