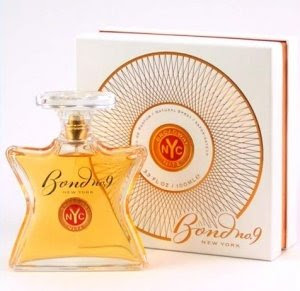 Broadway Nite was created by Maurice Roucel in 2003 for Bond No 9. Broadway Nite is a sweet, warm floral, with aldehydes aplenty and the potency & sillage of an 80’s perfume.

All of the above happens to appeal to me immensely. I’m finding myself with less and less tolerance for perfumes that don’t have presence or longevity. I’m also finding myself attracted to aldeydes, which is shocking, because about five years ago I avoided aldehydes like the plague. I also previously avoided perfumes that were inherently synthetic smelling, or “perfumey,” like Chanel No. 5, but now I’m finding that there are many scents in this genre that I love.

Maurice Roucel is brilliant. Roucel creates complex, abstract, perfumey gems but he also has the decency to ensure the scent has sufficient sillage and longevity. If I spend $185 for Broadway Nite, I want the bloody juice to last me all day! Roucel has created many of my favorite perfumes: Bond No 9 New Haarlem, FM Musc Ravageur, Gucci Envy, Hermes 24 Faubourg, all of which are wonderfully tenacious little critters.

When I set out to write about Broadway Nite, I did some research first, I scanned through the reviews on basenotes, MUA and looked to see if there were existing reviews on NST and other blogs. What struck me is that Broadway Nite is not well loved. Many of the reviews call it synthetic, perfumey and aldehydic in a negative way. This makes me think about Coco Chanel, way back in the early 1900’s, and her aspirations for Chanel perfumes.

The following is a quote from Coco Chanel:

"I want to give women an artificial perfume," said Chanel. "Yes, I really do mean artificial, like a dress, something that has been made. I don't want any rose or lily of the valley; I want a perfume that is a composition." No. 5 is famous for being the first perfume to heavily rely on synthetic floral aldehydes as a top note. Before synthetics, perfume either had to be applied heavily or frequently so that the fragrance would last.

Chanel applied the French aesthetic theory that "ugly" placed next to "beautiful,” by contrast, makes the beautiful object appear more so. In this era almost all perfumes were floral and "pretty" - designed to enhance a woman's beauty with more beauty. Instead of the scent of flowers, Coco wanted a perfume that "reflects my personality, something abstract and unique". She believed that a perfume should serve to spotlight a woman's natural beauty using contrast - i.e. the artificial perfume would make the woman's natural beauty more evident.”


Prior to Chanel, among others, perfumes were not artificial/synthetic, had very little, if any fixative and had to be reapplied constantly. Surely there are days when I’m not in the mood for a synthetic smelling fragrance and I reach for a more natural/organic, realistic and soft aroma. But there are just as many days when I want a true perfume of the Broadway Nite variety.

OK. Was just researching fragrance names and found your blog. Can I ask a totally random question? I wore a fragrance, 1979-1983ish, purchased at Montaldo's in Winston-Salem, NC. It came in a bottle shaped like a trapezoid. It had a name for which it was difficult to decode pronunciation. I was intending to buy Cabochard when I found it, but purchased it instead. After I moved from Winston-Salem and lost touch with this fragrance, I turned to Aromatics Elixir, which is similar, but less rich/dense/powerful. Can't remember the name, but still miss the fragrance. Have never been able to find, even with Google. Any chance you know it?

Hmmm. I have a few Bond samples, only one of which I've tried. I must see if Broadway Nite is among them.

Speaking of perfumes with presence - have you tried 'The Party in Manhattan'? It is wonderful! I would call it eighties-style, with impressive sillage. I think it might be your type of thing. Unfortunately it's so expensive, I can't even afford a smallish decant at the moment.... ;-(

Mary,
Sorry to be slow to respond. I've been thinking about your question but I just don't know the answer.

Have you tried asking this question on any of the fragrance fora - such as Perfume of Life (perfumeoflife.org), Make Up Alley (makeupalley.com) or basenotes.com?

I bet someone on one of those forums would know the answer. Good luck! :-D

Late to the party... I'm a fan of That Slut Tocade, and finally managed to get my mitts on a sample of BN.

Hoo boy, is this thing loud! One drop on my wrist is surrounding me with a fragrance forcefield. I do see the resemblance to Tocade - but it's Tocade with sequins on, under neon lights, having had a couple or three fruity cocktails.(I find Tocade plenty diffusive for me, by the way.) I don't notice the aldehydes much, but that's a note that for once does not stick out to my nose.

I'm smelling something in BN that reminds me of the flavored sticky lip glosses that were all the rage when I was a fifth grader: the Dr. Pepper one? *Something* like that - do you get that too? It's very sweet.