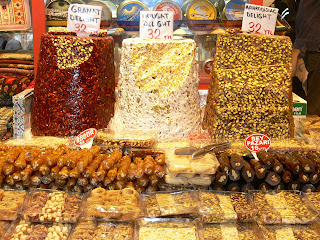 Keiko Mecheri is among my favorite niche perfumers. Bois de Santal, Umé, Osmanthus, Gourmandises and Patchoulissime are fragrances that I wear often in the summer. All of KM’s perfumes bear a thematic similarity ~ they’re relatively simple, modern, delicate and understated. I often think that the Keiko Mecheri line strikes a decidedly Asian sensibility and I hope this isn’t because I know the perfumer to be Japanese.

I’ve read that some think the KM line is a series of Serge Lutens knock-offs. It certainly is possible that Keiko Mecheri used Serge Lutens as her muse, however, her fragrances are so completely unique and different from SL that I don’t think this statement bears any truth. The only instance where there is a strong similarity is with Serge Luten’s Rahät Loukhoum and Keiko Mecheri’s Loukhoum. Most people will tell you that Rahät Loukhoum is the far superior fragrance, and while I would agree that Serge Lutens is superior overall, this is the only instance where I don’t think so. SL’s Rahät Loukhoum, based on a Turkish dessert by the same name, is unwearable for me. Rahät is a cherry, almond & vanilla syrupy sweet extravaganza. Rahät is an aroma that I think best left for home fragrance or a candle. A Rahät candle would be nice. I’ve tried Rahät so many times and in the end I just can’t stomach it and always think it simply isn’t meant to be worn. Keiko Mecheri’s Loukhoum, on the other hand, is also based on the Turkish delicacy, but somehow KM’s Loukhoum seems like perfume to me (and not a candle). KM’s Loukhoum is very similar to SL’s Rahät as far as the notes, but I think it’s the execution that’s completely different. KM Loukhoum is a very sweet confection but it’s also a slightly powdery, fluffy, cloud-like aroma. KM’s Loukhoum is an aura that surrounds me, making me think of sweet “air”, whereas SL’s Rahät smells like a realistic physical dessert sticking to my wrist.

I would guess that Loukhoum is the most popular fragrance in the Keiko Mecheri line. I don’t like sweet gourmand fragrances but somehow this one works for me. It’s so ‘airy’ that I don’t feel overcome by it. KM’s Loukhoum also manages to make me feel cozy instead of hungry. I also assume it’s the most popular in the Keiko Mecheri line because the gourmand fragrance genre has been all the rage with mainstream department store and Sephora-type audiences. I can’t help but think if Keiko Mecheri had a mainstream, instead of niche, showing it would outsell Pink Sugar, Philosophy, and every sweet, fruity, floral confection on the market.

Keiko Mecheri’s Loukhoum needs to be applied with a light hand. It builds up to an extremely strong aroma if you overdo it. And the longevity of KM Loukhoum is unreal! It lasts all day and into the night (easily).

Longevity: unbelievable ~ easily 12+ hours
Sillage: depends upon application but it can be strong

The overall aroma seems to be honey, almond, soft powdery woods and sweet vanilla. I don’t smell anything flowery.

Keiko Mecheri recently announced two additional Loukhoum perfumes so there will now be a trio of Loukhoums. She has created Loukhoum eau Poudrée and Loukhoum Parfum du Soir.

Loukhoum eau Poudrée will be a lighter and more floral (rose) version of the original.

Loukhoum Parfum du Soir will be an even richer and intensely vanillic version of the original.
Posted by Abigail at 10/11/2008 05:44:00 PM