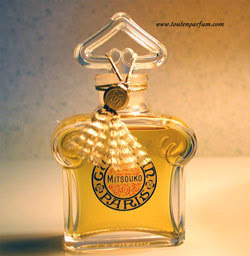 Saying you love Mitsouko is like saying you shop for groceries, the kind of statement unlikely to come as a newsflash to anyone--yet the fragrance does have its detractors. I don't know these people, naturally. I make a conscious effort not to know them. I very nearly developed amnesia about my relationship with one friend when recently she said Mitsouko smelled like that stuff that repels mosquitoes. Surely you don't mean citronella, I warned. After carefully judging my facial expression, she answered, certainly not.

Until I smelled the pure parfum at Nordstrom this month, I was fairly ambivalent about Mitsouko myself. I'd owned the EDT for a while, and pushed it to the "for special occasions" section of my collection, otherwise known as scents I dislike, am disappointed with, or don't understand. A spritz on the wrist lasted all of five minutes, it seemed to me, which was reason enough to move on.

I have no idea where this EDT falls on the reformulation continuum. It smells different enough from the EDP I purchased at Nordstrom that I wonder. The EDP has different packaging. The EDT has the geometrically striped, foil-bright gold box most of my Guerlain purchases from the local department store bear. The EDP box is more discreet, matte gold with a simple logo. Who knows what any of this means or where lines can be drawn or comparisons made. As I've mentioned before, don't expect clarification from the department store, or, God forbid, the Sephora counter, whose employees seem equally confused by the words Guerlain and Homme, the latter being a word they seem to take as some sort of environmental product for spraying on sheets or carefully abstracting unwelcome water closet aromas.

The Mitsouko EDP starts out bright and a little warm. It seems to give off heat, like simmering peaches. There are many other things in there, some of which you'll find listed on basenotes, though that listing is pretty sparse, as if this were a construction of admirable restraint. Perhaps that's true, and there's barely anything in Mitsouko. Maybe it's one of those experiments in minimalism so fashionable with people who like to believe things should be kept simple. I find that hard to believe, given how complex some of the Guerlain oldies are said to be. Their base materials alone would make quite complex perfumes. Whatever the listed pyramid of Mitsouko is, wherever you happen to be looking, I smell a strong gust of vetiver similar to that present in many contemporary perfumes. It presides over the entire composition, as far as I can tell, bolstering it from top to bottom with a fairly masculine character.

Though the EDT smells very similar to the EDP and is recognizably the same perfume, it lacks that quality. I smell the oakmoss prominently in the EDT, getting that muted, slightly fussy ambience associated now with elderly women and, increasingly, daring young men. This puts it closer to old school chypres, the closest of which, in my cabinet, would be Trussardi Femme and Rochas Mystere. Both possess a dry, almost smoky aspect absent in the Mitsouko EDP. The EDP is closer to the new chypres in many respects, not least because of their sunny disposition. Clearly, new means were applied toward a familiar end, but the result is arrestingly bright.

Which isn't to say the Mitousko EDP is insipidly cheery. It isn't. It's a complicated smell pretending to be more straightforward than all that. It has stealth and wears powerfully. It's remarkably androgynous, part sultry, part swagger. The brilliance of the reformulation is its ability to look forward and backward simultaneously, to modernize Mitousko without reducing it to a museum piece, admirable but unwearable. It smells richer than most of what perfumers are producing today, and more accessible than much of what came before it. The 2 ounce bottle seems a steal to me, given the endurance the fragrance has.
Posted by Brian at 10/30/2008 11:43:00 AM

Last I heard, the EDP had yet to be reformulated to remove the oakmoss. The newer EDT is still very good, although has a strange bread note. The extrait is very special, but pales in comparison to the vintage formulation. My preference is the EDP (older striped gold box if you can find it).

One of the best, and continues to be my all-time favourite! I can never tire of reading new reviews on it!!

Mitsouko is like grocery shopping - you mean luxe groceries right?? LOL
I adore it and its fantastic in the parfum (if you can afford it - only get it in parfum) . I love the EDP and have the "old" box of it plus a spare in the dark cool part of a cupboard. Mmmmm
I am not fond of the EDT at all. I do not know what happens but it goes downhill in EDT on me so I stick to EDP and if I am "in the money" - LOL , not these days with my $$$ pug who needs more eye surgery - I will not see a bottle of Parfum for a Very long time.
Rosie the Pug comes first!
Oh - she is named after Caron's rose perfume. My other dog is Oscar - after the scent "Oscar de la Renta" - see - I am "perfume" nuts!

Hi, I'm new to the perfume scene, but have been bitten badly by the bug! Mitsouko is one of the few perfumes I own a bottle of, so far. So glad you love it as much as I do. I greatly enjoy reading this blog, and appreciate all the writers' passion and skill with words. Plus, I learn about even *more* perfumes that I must try.... I guess it will never end, will it?!