Human, Do You Mind if I Spritz You? 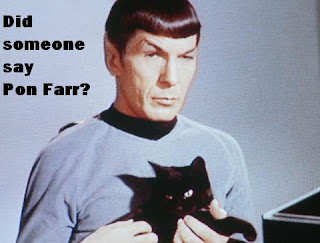 According to a recent Chicago Tribune article, a Maryland-based outfit named Genki Wear has plans to release three Star Trek-related fragrances. Their tentative drop date is the 24th of April, just a scant week or so ahead of the J.J. Abrams movie based on the early days of Captain Kirk and the USS Enterprise.

Two of the scents will be marketed as masculines. One of these will be called Tiberius and will be based on Captain Kirk's character. Tagline: "Boldly Go". The notes are said to be warm vanilla, sandalwood, and white musk. Red Shirt, the other, refers to the Enterprise officers who don't last beyond an episode's first scene. Its tagline: "Becase tomorrow may never come."

The feminine is to be called Pon Farr, which references the Vulcan mating ritual. During Pon Farr, which occurs once every seven years, Vulcan males go into a blood fever, becoming violent, and finally die if they do not mate with someone with whom they are empathically bonded. No word as yet on the tagline, though we humbly suggest: "Fleet in Heat".