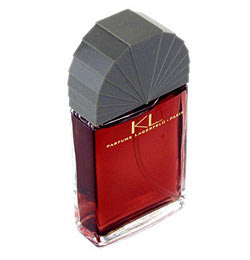 The other day I was in a perfume shop and smelled Fahrenheit. I was shocked when I brought the card up to my nose because it smelled so different than the bottle I own. It was richer, for one, and I started to wonder if maybe the tester was an older version. I could smell leather, and I never get leather from my wimpy excuse for the fragrance, which practically dribbles out of the nozzle. What if I went into this store and bought a bottle and got it home and it smelled nothing like the tester did, because the two were different formulations? How can you be sure which version you have at any given point?

It made me wonder. I have three different versions of Arpege, and though you can see the bone structure in all of them, they get more interesting the older they are. The newer version is nice enough but has none of the floral complexity, none of the smooth diffusion I get from the others. It also has a strong whiff of what smells to me like synthetic vetiver, and I'm starting to wonder about that, too, because I smell the same note presiding over the latest reformulations of Mitsouko, Je Reviens, Chanel No. 5 and White Linen. What is this note, exactly, and what's it doing in so many contemporary reinterpretations?

The Fahrenheit I own smells good enough, if just--and you can sense that original silhouette in it, if watered down to transparency--whereas the one I smelled in Sephora last week is atrociously far removed. I can barely see the relation. They seem to have simply gutted it. White Linen, Worth, and the others have fared better in the face of restrictions and penny pinchers; then again, I don't have the originals at hand to run comparisons. The old Arpege is preferable enough that I worry my 3.4 ounce bottle will run out sometime in my lifetime.

Today I read the Chandler Burr review of Britney Spears Midnight Curious. I was curious myself, and drove over to the store to smell it. Had I missed something good all this time? Not really. The discrepancy between what I smelled and how he talked about it left me confused. It smelled fairly generic to me for what it was: an intensely sweet bluebbery accord, part rubber Barbie skin, part scratch and sniff pie. I thought, well if he's going to champion this dreck I'm going to stop telling myself not to buy that bottle of Giorgio Red simply because it's gauche.

For twenty dollars I got an ounce and a half. I sprayed some on my arm once I was in the car and instantly started wondering what it used to smell like. I appreciate it now, but I suspect natural musks made it much different, like the old Arpege and Fahrenheit. Something about the current Red has always smelled slightly askew to me. I feel that way about Bal a Versailles, too.

Peach, black currant, hyacinth, and cardamom supposedly compose the nigh notes. Red reminds me of a drugstore perfume dressing up as Opium for Halloween with articles found in its mother's closet. I don't know who the mother is. Remember Bugsy Malone, the gangster movie where all the characters were played by child actors? It's like that. Instead of gunfire, pies in the face. Things are tangier than they should be in Red, exaggerated, a little cruder, but I can't help it. I love the stuff. It feels sort of schizophrenic in an entertaining way.

After some talk on this blog about Karl Lagerfeld's old KL perfume, I found some at the mall. It drove me crazy for a few days, as I knew I'd seen the bottle somewhere in town but couldn't remember where. The store had only a half ounce splash bottle left. It was nice, but too similar to other orientals I own to spend what they were charging. I'm not much of a dabber, either. KL smelled deep, but not as deep as Opium and Cinnabar, which still get my vote for the hardest of the hard core. And I'm more partial to Obsession than it seems legal to be on the blogs. How could such a great perfume have been, as some critics allege, a mass delusion?

Rather than buy the KL, I picked up two older Nina Ricci fragrances, Deci Della and Les Belles de Ricci Delice d'Epices. Deci Della was created by Jean Guichard in 1994. Some say fruity floral; again, I don't get that so much. The oak moss, cypress and myrrh force the raspberry, peach and apricot down roads they're not accustomed to traveling, if perhaps at gunpoint. There's that strange tension there between opposites. The oakmoss gives the fragrance an aroma very few contemporaries have, obviously.

Delice might also have been created by Guichard. I know he created one of the Belles at least. I'm not sure which. When I first smelled it I thought it had to be Annick Menardo or Sophia Grojsman. It has the edible qualities of the former and the sensual overload of the latter. I thought for sure, until I got it home, that Delice smelled identical to Tentations, another Grojsman creation. It has a caramellic undertone, for sure, but isn't entirely foody to me. It isn't exactly spicy, either.

Comparing Deci and Delice to Midnight Fantasy might seem unfair, but I do think it points up what perfume has lost since all the restrictions on, among other things, musks, oakmoss, and civet. And I don't think a fragrance like Midnight Fantasy is any kind of answer, as pleasantly banal and insidiously catchy as it might be. Aurelien Guichard is probably one of the best barometers right now for how these older visions can be recreated in the present without entirely losing their original spirits. His Visa and Baghari for Piguet find ways around the black hole left where oakmoss and natural musks once were, and I can't wait to see what he's done with Futur. As for Midnight Fantasy, I'll pass.
Posted by Brian at 3/28/2009 08:04:00 PM

I am impressed with your ability to track KL down...not happening in my town. I'm also encouraged, in a way, by your disappointment with it; now, wondering if I perhaps I am missing something and need to replace that long ago thrown away bottle is one less thing for me to worry about.

I'm with you on the Cinnabar; good stuff, that. Guess I need to dig out my sample of Deci Della; got it early in my learning curve, as a "toss in" with a vintage bottle of Norell from an estate sale, and I think maybe I wasn't ready to appreciate it then. In fact, I put it aside, thinking "later."

This wondering about modern re-formulations makes me glad that there are modern contemporary formulations* that seem to be worthy on their own terms.

*"Modern contemporary" hopefully is understood as a non-redundancy in this context....;)

How can you be sure of which formulation you hold in your hand? I am entertained by the idea of vintage being imprinted on the bottle...

This is maddening. We don't even know what we're buying. The two schools of thought on the fora I read seem to be "Accept the modern, we can't do anything about this" and "Search out the old stuff, it's better." Neither work, really. So much of the modern is girlie dreck; so much of the old stuff has degraded to the point that we may not be smelling what that perfumer intended either. (As for Bal, I just have to say, c'mon, you can buy a huge bottle of it now, the Prolux version, for $25; should you really expect all that much? I have tiny bit of old Bal perfume and it's astounding. But still, even the new stuff is better than Britney.)

I think sometimes you can luck out at the online discounters and receive older stock as I did last year with "Black Cashmere," which came in the black stone bottle. Or with decants, trusting the experts to find the best available. And this is the best I've been able to do, so far.

You know, I actually came to Bal a Versailles expecting nothing, because I'd never really heard much about it. I was intrigued by the bottle and gave it a smell. I loved it. I still love it. I have a big bottle. I pretty much take it for what it is, having nothing to compare it to. My real curiosity about it is what creates that weird off note. I don't really chalk it up to reformulation. I mean, Jicky has some very strange juxtapositions approaching (maybe exceeding) odd or off. I just wonder what that IS in Bal a Versailles, and whether it was always there. Red has an off note too and I wish I could compare the one I smell now to the eighties version.

I definitely think there are perfumers working today who have clearly found ways around the restrictions, though they don't always fare so well with penny pinching. I don't think I've smelled a Menardo or a Grojsman which isn't incredibly rich and full bodied like those older formulas. In general, rich, potent, robust fragrances are being made.

The maddening thing for me, like Olfacta says, is that we don't know what we're dealing with most of the time. This is only exacerbated by sales staff and online merchants who don't know either. I doubt very much that my money would have been refunded had I bought Fahrenheit at Perfumania and tried to return it because it didn't smell like the tester. The woman who dealt with me would have looked at me like I was crazy. Of COURSE it's Fahrenheit. Of COURSE they're the same thing.

When you add all this to the general fact that perfume is so hard to describe and rate with any kind of consistency between users and critics, the effort seems kind of hopeless. I think ultimately what we're talking about when we talk about fragrance are our own feelings basically. Perfume is just the vocabulary we're using to elaborate on the way we see things and the world at large. It's just as fraught with misunderstanding as any other attempt at self-expression, with its own particular challenges.

I must admit I haven't tried the KL in the stores nowadays. I still like my old parfum, but that could be partly nostalgia. I don't feel the need to buy more, though.

I do recall liking it partly because it had spicy warmth without the 'weight' of Opium - a scent which I can't wear, because it has always given me a headache.