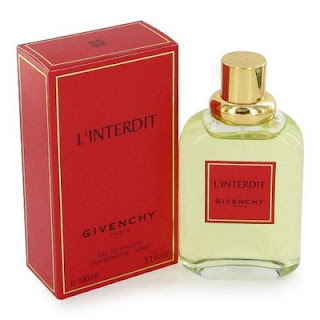 Can someone please tell me what the 2002 reformulation of L'Interdit ever did to anyone?

I know, I know, the first one was Audrey Hepburn, all powdery florals and white gloves with a touch of wispy, ephemeral whatnot. I'm sure it was lovely, and in comparison, here comes Raquel Welch, top heavy, shaking it, showing it, lips like a come on, hips like a been there, done that. It's like replacing a Rolls with a Ferarri, I know, but a Ferarri is quite something too, so can we all stop acting as if it's chopped liver and onions?

I'd read so much about the reformulation (and we're not talking about the more recent reformulation, which seeks to restore, some say successfully, the original Hepburn effect) that when I tried it, I was a little shocked how much I liked it. I don't know why these things keep shocking me. When I smelled Parfum d'Habit, more recently, I was surprised too. I'd read customer reviews on basenotes and makeupalley describing it as the most animalic thing this side of a rat's ass; foul, leathery, urinous, and just generally, unforgivably offensive. I couldn't figure out what people were talking about. Medicinal, yes; urinous, no. I smelled no leather, no animal, no wet dog, and really, truth to tell, not a whole lot of anything I'd heard described. Parfum d'Habit is pretty, to be sure, and even somewhat jarring at certain points, particularly the opening, which has the medicinal astringency of witch hazel, but it's hardly the caveman I expected, and the 2002 L'Interdit is certainly no run of the mill fruity floral.

I should have known, with Jean Guichard at the wheel. Everytime I smell a Guichard fragrance I'm again reminded how much his son Aurelien has inherited from him, and you can see links between L'Interdit and the light/dark achievements of Visa and Azzaro Couture. Like father, like son. Papa Guichard's genius, to me, is persistent radiance with an inner edge which somehow turns things inside out or upside down. Rather than getting brighter, and lighter, Guichard Sr.'s best work dries down to a burnished, heat seaking core, revealing unexpected, unsettling dissonance. So Pretty by Cartier has a straightfirward succulent fruit note up top and a darker, contrasting pit of angst deeper down. Eden seems so bright, so cheery and floral at first, and yet the picture Cacharel uses to package this fragrance gets right to the bottom of its attraction, showing a tangled jungle of competing white flowers and the somewhat unsettling suggestion of something like a poisoned apple beyond all the distracting foliage. Fendi Asja achieves this contrapuntal effect by turning berry into heady red wine. Go down the list, and you'll find these magic tricks throughout Guichard's oeuvre, right down to the weird, doughy jasmine of LouLou.

Guichard's L'Interdit sprays on like an easy going if steeply pitched fruity floral, but there's something in there which doesn't quite fit the image, and you start to see it very soon after the initial notes start wearing down. I'm no chemist, but judging by the pyramid provided by Osmoz, I would guess this has something to do with the combined effect of iris, frankincense, and tonka bean in the dry down. What I kept thinking, before I'd seen the notes, was that someone had mixed some incense into my bottle. How could a stereotypical fruity floral dry down into something so resinous and compelling? The answer: this is no stereotypical fruity floral. Givenchy seems to have known this, and after you discover the fragrance's weird complexity, the red label and box make perfect sense. Yes, red for rose--and passion.

That iris and frankincense combination gives L'Interdit a rooty incense accord I find pretty intriguing, making L'Interdit anything but a 1950's nice girl perfume. That isn't to say you would notice iris in the mix, before or after you know it's there. The tonka bean gives it a sturdier platform to stand on, suggesting cinammon, hay, clove, caramel and, especially, almond. This trifecta of contrasting basenotes gives L'Interdit a curious quality, making you wonder what it might do next. The Audrey Hepburn prototype died with its source, and what Guichard seems to have been saying or suggesting with his reformulation is that it might be high time we redefine what we mean by "nice girl" in the first place. In the fifties, being a nice girl meant that you knew your place and didn't rock the boat. You were to look pretty and to defer, always demurely. You refrained from showing more skin than absolutely necessary. Guichard's L'Interdit is a celebration of the nice girl's emancipation into sensual and emotional complexity, allowing her the freedom to be outspoken and even contradictory without reducing her to total transparency. Whereas the original evoked soft, powdered skin, Guichard's version celebrates the dewy prespiration of a woman too busy experiencing life to let the tought of a little sweat trouble her.

I have never been a fan of L'Interdit but if I can find it -- I must have a re-sniff!

Hey Lady J. I'm a huge fan of Guichard. Today I found one of the few perfumes he created that I hadn't yet smelled, and instantly I knew it was his. Nina Ricci Deci Dela. It has the most fantastic oakmoss dry down, and that weird tension L'Interdit has too. If you smelled them separately you might just confuse them. I'm not sure L'Interdit is the best fragrance ever. I'm not sure what is, all things fragrant being so subjective. But fruity florals get knocked to the floor the second they come out the gate. We've become so biased against them that we don't spend the time learning to distinguish between mediocrity and quality. Truthfully, before I started looking into Jean Guichard and tying his perfumes together, I didn't even bother sniffing L'Interdit, though I saw it regularly at a local store. Once I found out it was Guichard it became worth a smell. And I love it. It totally has his signature.

Brian - I think I can spot a bottle of that Deci Dela in our shops here in Australia (we get left out of so much !!!) .
I am going to HAVE to give this one a sniffer too now!
Thanks.