This Week at the Perfume Counter 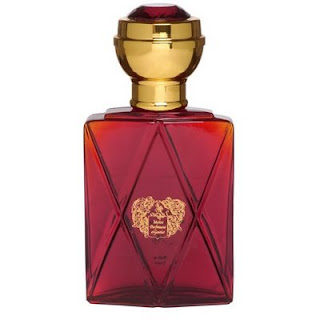 I've resisted writing this for over a week now because I know it's going to upset some of you. I told a friend over the phone a few nights ago and, hearing her reaction, I was glad we were separated by several states. Listen, I'm always going to TJ Max and Marshalls. I drop in at least once a month, sometimes (okay, usually) more. Most of the time I find nothing, nothing being your Polo Sport, your Giorgio Red, your Ralph Lauren Hot, Rocks, et al. I leave empty handed more than I'd like, and sometimes the thought of leaving empty handed bums me out so much that I grab one of said nothing specials. Believe me: what I'm about to tell you is a rarity for me too.

Last time I casually ambled into Marshalls, I found Armani Prive Cuir Amethyste. This retails for a pretty penny, as you might know. At Marshalls, it was less than thirty bucks. Luca Turin detests Cuir Amethyste--or is it Tania Sanchez--or does it matter? If one disagreed with the other, the dissenting opinion would have been logged under its contradiction. The Guide calls Cuir Amethyste a mess. I think it's pretty great. It aspires to the violet leather territory occupied by Balmain's Jolie Madame and provides, I think, an interesting contrast to that fragrance's more old fashioned approach. The violet is creamier, the leather more sheer, closer to the Lancome Cuir reformulation than the heavier-handed leathers of yester-year. A steep price tag is almost always mediated by good longevity to me, and Cuir Amethyste sticks around quite a while. I could smell it hours later.

Naturally, once I knew that one Marshalls had an Armani Prive, I was obligated to drive all over town. How would I sleep that night, otherwise? What if there had been other bottles in other stores? How would I ever sleep again, wondering what might have been? I visited four TJ Max and Marshalls locations and realized very quickly that some sort of major drop must have occurred recently. There was so much product I hadn't seen before. I'd love to tell you just what, but I was in a fugue state, and now only Calvin Klein Secret Obsession comes to mind. It won't make you any happier to learn that I did find another Armani Prive, perhaps the best, according to many. Hidden among the other, bigger boxes was a bottle of Bois d'Encens. I'd smelled it at Nordstrom months before, and might have even sprayed some on. I remembered liking it, but at upwards of several hundred dollars for 1.7 ounces, I'm more apt to dismiss alleged greatness than collapse in helpless ecstasy. What's the point?

Bois D'Encens is indeed fantastic. For under thirty bucks I'll spend all the time in the world allowing myself to fall in love with a great fragrance, and Bois d'Encens rewards the adoration. It goes on sharp and, like Amethyste, sheer. Even sheerer, really, a penetrating incense which feels like something burning up at higher altitudes, at some mountain monastery where the air is thin and brisk and makes all the monks a little giddy and ditzy. This sets it apart from every other incense I've smelled, including the ultra popular Comme des Garçons series, which locate in lower altitude houses of worship. I would say Bois d'Encens is more of an outdoor scent overall, smelling somehow of clean air. This impression only intensifies as time goes on, reinforced, if anything, by the emergence of an interesting, equally sharp but bracing vetiver.

Interestingly, both of these Armani Prive fragrances were created by Michel Almairac. They were the only ones I found, and, as far as I know, the only two he created for the line. Almairac is someone I've known about and with whom I've been fairly familiar ever since I started consulting the nowsmellthis nose directory. Until recently, I never took as much of an interest in him as in my initial favorites: Maurice Roucel, Annick Menardo, Calice Becker, Sophia Grojsman. Slowly, I've acquired more and more of his fragrances, and over time have started to pay more mind. Cuir Amethyste and Bois d'Encens certainly caught my attention. Until smelling these powerhouses of persistence, I'd thought of him as someone who created some nice but wan fragrances, among them L'Artisan's Voleur de Roses, Chopard's Casmir, Gres' Cabaret, Gucci Pour Homme, and Rush, most of which I liked, some of which I really loved, all of which, however loud in theory, faded to a maddening whisper on my skin. While the Prive scents don't change my mind about these others, they do give me a more well-rounded appreciation.

One last thing about Armani. I find--do you?--that those sheaths they come in, wood casing with stone tops, somehow reinforce the idea that they aren't worth the asking price. The bottles are light as air, which made me feel, however unconsciously, that there was practically nothing in them, that whatever it was had little substance. Who knows what the design principle was behind this packaging decision from a rigorously, even religiously, uniform company. Armani's aesthetic is all about straight lines, simple contours. No showy flourishes intrude upon this cool surface like a ripple does on the surface of a pond. In that sense, the bottles fit. But from a sales perspective, lightweight risks reading as negligible.

I did make some other purchases, though none which will likely inspire jealous fits of rage. Who knew Bulgari Blu was so nice? I didn't. The packaging is so similar to Bulgari Blue Notte that I'm not sure I even realized these were two separate fragrances. Blu gets knocked a lot on the blogs and boards, I discovered. Soapy, too much ginger, yuk, gross, etc. I think it's a far superior ginger scent to the latest Ellena Hermes, by so far a margin that to compare them in any other way would be exceedingly misleading. Blu is milkier, for one, in stark contrast to the Jardin's ozonic properties. It's a richer, more pungent ginger, with a creamy floral influence. I like it a lot and will wear it frequently (as frequently as someone with as many fragrances as I own can).

Let me just close by saying that being sick with a cold sucks for anyone. For a perfume lover, it's truly utter hell. For the last two days I've been unable to smell a thing. What torture it was last night, inviting my friend Bard over for dinner, begging him to describe for me the smell of Parfum D'Habit and Ambre Precieux, especially when his descriptions are so typically off the wall. Please, I begged him, try to describe them, just this once, using typical perfume descriptors, rather than items one finds in a thrift shop, as "stuffy vinyl suitcase with strawberry juice stain" will mean next to nothing to me. It didn't help that my efforts to reconcile his impressions with the reviews on makeupalley and basenotes proved futile. Without fail, eight out of ten reviewers described Habit's opening as compost or fecal or Kouros with even more urine. Bard's bewildering verdict was "no such thing." The consensus seems to be good longevity and sillage, whereas Bard says both Precieux and Habit remain skin scents, barely there. Any thoughts from readers who have smelled these and can describe them realistically, as opposed to romantically? Your input would be more than welcome, and I promise I'll return the favor in your time of need.
Posted by Brian at 3/21/2009 01:08:00 PM

I'm curious about where you visited the Marshall's? I'm intrigued about Bois Bois D'Encens and where on earth you found it? I've heard of Cuir Amethyste, Amber Soie, and Éclat de Jasmine popping up in Marshall's/TJ Maxx, but Bois D'Encens was never mentioned. You were very lucky! Did you get Cuir Amethyste and how do you like it?

This is the time of year when the big "drops" happen at Maxx, I've heard -- the Christmas overstocks. I don't think they make it here though. I've heard rumors of Guerlains but never see one. The Maxx I went to yesterday had Prada (at $39.99, high for them,) Anais Anais, Caline -- not sure if that's very good or very bad -- and the Blu you mentioned, but everything else was the usual crap. No Bois d'anything -- ever. I'll keep going. Congratulations! How does the Cuir Amethyste compare to Kelly Caleche, if at all?

Wow. Total score. Guess I know how I'll be spending my day off tomorrow...starting with filling up the gas tank... ;)

No jealousy; simple happiness for you.

I am so jealous. :) What kind of a shop is that that you can find Armani privee for 30$? And why isn't there one available somewhere for me... :)

Olfacta, I really love Kelly Caleche but I've never smelled a bit of leather in it, hard as I've tried, so I'm the wrong person to make that comparison. What I get from Kelly is vegetable iris and pepper. I was trying to remember what other fragrance Cuir Amethyste reminds me of while writing this post but couldn't remember.

Now it comes to me: Etat Libre D'Orange's wonderful Putain de Palaces. Putain updates Jolie Madame in various ways, substituting lipstick and powder for those rich, restricted natural musks. Putain lasts and lasts. It isn't as creamy as Amethyste, nor as openly leather. This leather is decidedly contemporary, reminding me of Lancome and Cuir D'Iris. It throws in a heavy dose of violet, which doesn't really fully emerge until into the heart. Have you smelled Jolie Madame?

Scent Self and Ksenia, there is still Armani Prive to be had. I was back at Marshalls yesterday while running errands and picked up another bottle of Bois d'Encens. Ines, Marshalls and TJ Max are American creatures.

The bottles are tee-niny compared to the sheaths the Armani counter puts them in. These are refills and I actually prefer the packaging. Small, delicate, opaque brown glass, and yet the scents pack a punch. No wonder they float in those wood containers, which are twice their size. I think it must be the size and the name that have kept these from being snatched up more quickly. Who besides a perfume lover would know that 30 bucks isn't a gamble on a scent with a funny name like Bois d'Encens but a steal?

Right now I have the flu and can't even smell my husbands Brut deo (thank god) .

I know how you are feeling.

Hi Brian -- Kelly Caleche reacts oddly on my skin. It's schizophrenic. The drydown does get a little leathery, or at least that's how I intrepreted it last year when I was wearing it a lot. Should try it again...now, Jolie Madame...that's leather. I have a vintage bottle of EDT "mist" which comes out in measured sprays. It's parabolic; the heavy bitter base (quinoline) and the sweet violet treble and not much in the midrange at all. I think it's an extreme version of JM, because what I read about it sounds a little more approachable.

Oh Olfacta, I WANT THAT version of Jolie. Where do people get these older formulations? I shouldn't ask, as it would set me back even more.

Hi Brian -- Well, I got this bottle of JM at a flea market for$15. On a bottom shelf. Behind a bunch of junk. Boxed & sealed; lucked out that day. (This hardly ever happens.) PM me at pborow at comcast dot net and I'll send you a few mls if you like.