This Week at the Perfume Counter: The Perfume House, Portland, Oregon 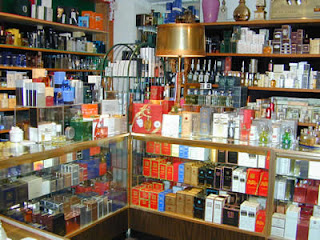 I have a soft spot for this little off-the-beaten path place, so I was excited, a few months ago, when I found out I'd be able to make a trip back to Portland this month. Around this time last year, I visited and, on the hunt for perfume, was directed to Hawthorne Street, where the Perfume House sits just back enough off the road that you might miss it if you drove by too fast. I drove slowly. The store is aptly named; situated in an old house, the first floor is almost entirely taken up by fragrance. Last year I had a crash course on Lutens and L'Artisan. I obsessed over all the Comme des Garçons. I wasn't so interested in Patou's Ma Collection; I only learned later that they'd all been discontinued and many are hard to find. I would have paid a lot more attention, had I known back then. The Perfume House has an extensive selection of Caron, and I got a primer on those. I smelled the Montales, Etro, Amouage, D'Orsay, Carthusia.

I was overwhelmed and excited during my initial visits to the Perfume House, so this trip was a welcome opportunity to get a little more specific, spending more time on things I'd either missed in the shuffle or overlooked out of general beginner's ignorance. I've learned a lot in the space of a year, too, and was able to focus on rarer items, like a single bottle of Molto Missoni (tarry, smoky, floral: me likey) and Elsha, a cheapo but lovely leather toilette with a modest but committed following of admirers. I found a few things I'd been looking for all year, like Balenciaga's Quadrille; this one is very nice, subtle but rich, my favorite of all the old Balenciagas I've smelled (Le Dix, Prelude, Portos, Ho Hang). I revisited the Ma Collection, snatching up bottles of Divine Folie (wondrous carnation!), Adieu Sagesse, and L'Heure Attendue. I passed on Amour Amour and Chaldee, which were pretty but didn't arouse must have psychosis. L'Heure Attendue is spicy wood on the dry down: sandalwood and patchouli, according to Jan Moran. There's also geranium, lilac, rose, ylang ylang. Adieu Sagesse is the final entry in Patou's love trilogy and makes wonderful use of carnation, a floral note present in many of the Ma Collection fragrances. The focus seems to be on gardenia but I'll have to spend more time with it. Adieu wears like a skin scent, floral musk and a bit green.

There are no more bottles of Vacances in stock, but they had a tester in the back and brought it out so I could at least get a whiff. Turns out Vacances is one of my all time top five favorite fragrances. It must be as popular with others. Of all the Ma Collection testers, it was the only practically empty bottle. In fact, there was barely enough left to spritz out onto a cotton ball. Over at Bois de Jasmin, Vacances is characterized as "intense verdancy", "a perfect juxtaposition of delicate peppery and green sap notes folding into honeyed sweetness." Intense about gets it. Vacances is leafy green and lilac, and totally out of this world lovely. It also gets my vote for best use of galbanum. In addition to Vacances I smelled Cocktail and, finally, Pascal Morabito's Or Black. There was none of the latter in stock (you can only get Or Black in France now) and I could see why Turin raves about it and others want to get their hands on some.

Perfume House, like other older perfume shops (Parfumerie Nasreen, in Seattle, for instance), does have rarities like Molto Missoni in stock. There are early Parfums de Nicolaï, Safraniere and other discontinued Comptoir Sud Pacifique selections, Zut by Schiaparelli, even various Crown fragrances. I picked up Sandringham, Crown Fougere, and Crown Park Royal, all very nice. Sandringham is my favorite of these period pieces, all three distinctly bygone-era masculines. All three last amazingly well, too, and have a base which seems characteristic of the line, rich in moss and sweetened woods. Sandringham is distinguished by a well-blended muguet note. Crown Park Royal uses galbanum in a way which places it close to contempoary fragrances like Romeo Gigli's Sud Est and patchouli in a way which places it squarely on top of Michael by Michael Kors. Park Royal exceeds both in terms of subtelty, managing to use some very heady materials without being taken hostage by them.

After several days at Perfume House I finally did the math. I'd been spending so much on fragrances I liked, when for the same amount I could get one I truly love. Amouage Jubilation XXV is to my mind a Bertrand Duchaufour masterpiece. Timbuktu is swell but poof and it's gone. Likewise Dzongkha, Mechant Loop, Sienne D'Hiver and his entries in Comme des Garcons' Red Series. I like them all but on me they're little more than skin scents. Not so Jubilation XXV. Months ago I'd been given a sample, most of which I wore out on the town in LA one night. Jubilation really commands the space around you in a way I love, its fruits and spices burnished with just the right amount of frankincense. It projects and attracts. Wearing it, I felt electric, and thought if I ever had that kind of money for a bottle of perfume, this would be it. Of course, once you've purchased three or four bottles of perfume, you've spent that kind of money. Realizing this, I took my unopened "like" buys back to Perfume House to trade in for a "love".

The best part of the place is the staff: the best I've encountered in any fragrance retail environment. As I remembered, they were friendly and helpful without being obtrusive or overly chatty. Tracy, in particular, is always great to shop with.
Posted by Brian at 2/14/2009 08:09:00 PM

Oh how I wish we had a fantastic shop like that in Australia!

It sounds like a fantastic shop - if a little hard on the bank account... ;-) I'm suitably jealous.
I wonder if we have a shop like that in London?
Maybe Les Senteurs.... I did go there once, years ago, before my perfume obsession had become the monster it is today. I remember the saleslady (very nice) steered me towards a Rosine. But I haven't been back since then. Which is daft, come to think of it! Though I don't think they have a huge selection, or any real rarities...

Oh, how I wish we had a store like that here (Atlanta). We have...zip. Dept. stores and a few (bad) Sephoras. Just to be able to walk around trying new things, as I used to do in the freestanding perfume store near me in L.A. Learned so much there, but now it's all mail order in one form or another.

Brian, I really enjoy your blog (and Abigail's posts, too). As a newbie to perfume, I appreciate your reviews.

I just sunk some funds on vintage Jicky and Samsara parfums there. Did you know that all of their Guerlain testers are the original EDT formulations, and they will gladly make you testers? So make sure you put that on your list next time you go!!

I think we would all do well to run the like v love "maths." Indeed...when you look over the bottles collected...it seems that a larger investment in a passion is well placed.

Of course, there is being able to wait and accumulate said funds...when one could be accumulating fragrance choices...

Reminds me of reading some mag long ago, which contrasted the French way of dressing ("women have 2 or 3 quality outfits, with accessories") with the American wardrobe ("outfits for at least two weeks' worth of days...").

I have no idea how accurate this was/is, but it seems pertinent...

I KNEW you would all relate. I was seriously in heaven, even with the flu. And yes, I suspected the testers for Guerlain were old ones. Months ago I was sent a tester of Vol de Nuit and later, when I bought a bottle at Nordtrom in Seattle, well, it was...different. A little. Enough. I have to say that of the perfume shops I've perused, The Perfume House is the friendliest, the most hospitable to the perfumista's peculiar needs. And the very best thing about the place is being there when someone like you rushes in off the street, out of breath, having run halfway there.

Juna, thank you so much. I think Abigail and I enjoy doing this so much because other people seem to enjoy it--and we enjoy the hell out of each other too. And reading all the other blogs is a highlight of my month. If only I could sit around all day reading them, but one has to get out and buy more perfume than one can wear, too, alas.

I am spoiled rotten - I live only a couple of miles from The Perfume House - yet I discover new treasures every time I go there. Don't even get me started on the Patous and other jewels of the perfume Golden Age no longer to be had...

Thanks for the great review of the shop, it's my favorite place on Earth.

What a great perfume house I wish I could also go there,thank you for guiding me through this.