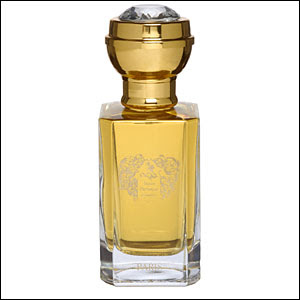 Many online reviewers have it stuck in their craw: a major offense committed by a perfume with the word camelia in its name is the fact that camellia flowers have no smell. Getting indignant about this makes about as much sense as faulting Bulgari black because color has no scent either, or Bal a Versailles, or Coco, so I won't waste much time dwelling on such a non-issue, except to remind people that perfume is more typically associative and abstract than literal and representative. I should also point out that the name of this fragrance more likely refers to the leaves and leaf buds of the camellia, which are used to produce teas such as oolong, white tea, black tea, green tea, and pu-erh tea, all of which are plenty fragrant. I'm going to venture a guess that Chinois means Chinese, too, as opposed to the kitchen utensil of the same name, lest any residual confusion around the name of this fragrance get our tightie-whities in a wad.

Reviewers also fault Eau de Camelia Chinois for smelling similar to Barney's Route de Te. It does--but again, this is like faulting the color gray for being derivative of the color black. Very few perfumes smell like nothing else known to man, let alone like no other perfume known to perfumistas. Personally I derive a lot of pleasure from discerning the differences between very similar fragrances. It helps elucidate what makes them special. Opium and Cinnabar are closely aligned, but the differences between them help you appreciate each more, and spending some time with those observations can teach you a lot about how different elements and accords can influence the same basic elements. I always like Route de Te, and it's true I might not want to own both, but Camelia has its own tonal distinctions and is worth considering separately.

The tea note is unmistakable, as is a bright ringing citrus note up top. Upon first spraying Camelia, the nostrils burn a bit, as if someone had zested a lemon or an orange rind on your skin. That settles down quickly, and the heart of the fragrance emerges. Camelia is bright throughout but has a nice, sturdy foundation, underscoring the tea and grass notes with a smokier, more herbal edge. Where Route de Te remains cheerfully bright and loud for the duration, Camelia creates a chromatic tension between light and dark, heavy and light, and, though an eau de toilette, has the lasting power of many eau de parfums.

It makes for a fantastic Spring and Summer scent and would even bring some levity and icy warmth to the winter season as well. Like Tommy Girl, it speaks with pinpoint clarity, feels crisp and clean with a hint of the dirty underbelly lurking beneath any patch of leafy green. The florals and tea are blended much more smoothly, I think, than the notes in Route de Te, resulting in a nice, mellow feel. You can smell the apple, as in Tommy Girl, but also the grapefruit, the pineapple and the banana. Less readily apparent are basil and fir, though their presence makes intuitive sense. Camelia ultimately feels more sophisticated than Route de Te to me, and proposes a nice, languid alternative to Tommy Girl's non-stop 50 kilowatt, five mile radiance.

The bottle is a big block of a thing and would look very cheap or very elegant sitting out on your dresser, depending on your taste in things and who you happen to be.
Posted by Brian at 2/27/2009 12:55:00 PM

I picked up a bottle of this in the John Lewis sale recently. I'd never heard of it, and there was no tester, so it was a blind buy. It turned out to be a good one. I like it very much. I'm waiting to feel a bit more spring-like to wear it, though. I'm still wringing the last drops out of my chance to wear my winter spicies!

there are several varieties of camellia that do have a smell, and are in fact cultivated for their smell.

I realize this post is 5 years old now, but in looking for a web site (to order another bottle) I happened to come across your article. So although older, I still feel compelled to post this comment.
I have been wearing this scent for almost 20 years now and still love it. I have never thought of, nor spent any time in, separating the different notes. But I very much appreciated your analysis of this scent. It remains one of my favorites and although I have tried others over the years, I always return to this one over and over again.
Well done, and thanks.

Hi Judith, I'm glad to hear from someone who wears and loves this. It's been a long time since I've heard anyone talk about the fragrance. It reminds me a lot of a few other tea-like fragrances but really stands apart with its own unique qualities as well.