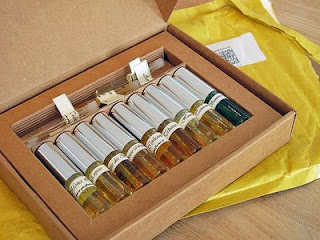 I'm not totally uninterested in fashion and the luxury industry. Just a few months ago, I bought a dictionary of fashion designers and terms (to help, I told myself, when writing, say, a Dior or a Norell perfume review). I returned the book a few weeks later, because (surprise) I needed the money for perfume--but the general curiosity is there. Reading Nathan's website I understand how people who think they love perfume but have never (or not yet) heard of Lutens or L'Artisan or, less likely still, Parfumerie Generale or Andy Tauer, must feel when reading my detailed posts about perfumers. It's all a bit over my head--but a fascinating glimpse into a parallel universe. If I'm going to learn about how hard the current economy is on watch/timepiece retailers, it's going to be from Branch. Somehow, he endows the subject with poetic significance. 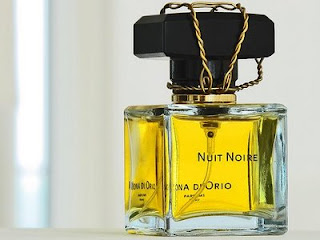 What I really love are his photos of perfume bottles, which are like nothing I've ever seen. Does he take these himself? It's hard to imagine--not because I doubt his technical skills but because the bottles seem to have been photographed with the kind of clarity and illumination that only fantasy or CGI effects can achieve. Why doesn't the fragrance industry photograph perfume this way? It never occurred to me until I saw these photos. They're photographed as if just received in the mail, surrounded by their packaging and even, sometimes, the paper they came wrapped in, capturing that exciting moment any pefume lover knows, when, after days of waiting and false alarms, "the package" arrives.

Nathan understands how wonderful that feeling is, how weirldly momentous. The day drops away, all the stress, the distractions, the anxiety, and what you're left with is a zeroing-in feeling; the world goes dim. All the light gets sucked up by the bottle, which burns with a golden intensity, part sunshine, part emotion. It isn't just the bottle itself but opening it, feeling it, weighing it in your hand.

The photos pinpoint the architectural splendor of these bottles, too. Tom Ford's Private Blend Italian Cypress looks like something out of Bauhaus; i.e. a work of art. Caron Infini is a marvel of cubism; light and shadow animate its angles, shifting them into ever new kinetic configurations. Branch looks at these bottles and sees what's interesting from every angle; then he shows you, in just the right way, so that you understand what you're seeing and taking for granted. 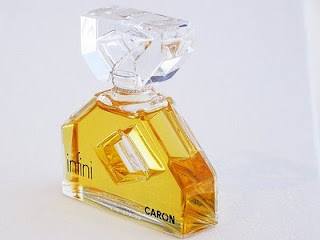 He emphasizes the way the box containing Luxe Patchouli opens up like a cyborgian blossom, making the bottle the flower's equally angular pistil. He shows all the care and personality that go into bottling a Liz Zorn perfume, and how special receiving one can be, using the colored wrapping paper packaging a bottle of Tobacco and Tulle to depict the fragrance as something which magically appears in a cloud of burgundy smoke, like a rabbit out of a magician's hat.

Branch foregrounds the detailing on a bottle of Etro Messe de Minuit, that relief at the base and on the cap, finding in the liquid that quality of light coming through high cathedral windows when the sun sets, the feeling of solitude you're struck with inside these spaces. The ribbon which wraps Shalini's large box snakes around the bottle once the box has been opened, expressing how, even once you've separated the bottle from its packaging, the packaging influences your experience of the fragrance, setting a stage or the tone for your engagement with it.

Nathan's photos make fragrance seem like a gift from God, and I check them out regularly to remind myself just how mystical fragrance really is. See what I mean?
Posted by Brian at 5/16/2009 10:49:00 AM

Brian, the photos are just stunning. Thank you for sharing them and bringing Nathan's blog to my attention. I've known about it of course, but finally took the time to *really* peruse it.

Thanks. I'd never seen the site. The photos of Annick Goutal's Les Orientalistes comfret were orgasmically beautifully!

Thank you. For understanding. For getting it. These bottles are so beautiful to me -- the boxes, the paper they come wrapped in, the bit of ribbon, and especially the way the liquid contained inside just glows.

And for some reason, I started to tear up when you mentioned Caron Infini -- maybe it's because no one even talks about Infini anymore, yet the bottle is strikingly beautiful, and the fragrance itself is complicated and angular and unique. And you noticed.