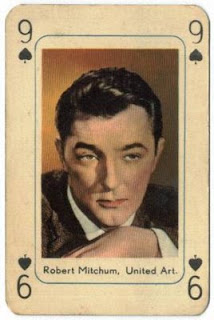 A while back, Abigail raved about this little wonder, and I made a mental note to check it out. I don't know what's going on with Sonoma's website--the till is down, so you can look, essentially, but you can't touch--and some of you are going to be frustrated after reading this review, because I have high praise for the fragrance, but look at the bright side: you can't possibly know how truly wonderful Tabac Aurea is, and what you're missing, until you get your hands on it, and even then the exact nature of its powerful appeal will elude you.

For Abigail, Tabac recalls vintage fragrances--their complexity, attention to detail through depth and drama, the rich, dovetailing stories they tell. Her presiding image for the fragrance was Bette Davis. Funny how things work, because I'm picturing Robert Mitchum, whose sharp-angled cheekbones are trying to make something feminine out of what is clearly butch-saturated stock. Clearly, Tabac Aurea is unisex, gender-friendly, but in a sea of bland, interchangeable, unimaginative masculines, I'm apt to claim it as one for the boys. Then too, Tabac recalls some of my favorites: Histoires de Parfums 1740, Parfum d'Empire Fougere Bengale, Annick Goutal Sables. In all of these, immortelle plays a big role, and though there's no indication that Tabac Aurea even contains immortelle, the argument could be made that I simply love the kind of fragrance Tabac resembles.

That isn't giving what I'd include in my list of the top ten masculines of the last decade much credit, now is it? And yes, Tabac is that good. It's certainly the best tobacco fragrance I've ever smelled, but it's more than that, possessing the kind of magic words fail. Looking at the facts alone--persistence, projection, quality of materials--it blows Sables off the table. Sables is gorgeous, if you have something on hand to apply thirty minutes later, to console you once it has vanished. Tabac Aurea lasts all day on my skin, has the kind of diffusion that makes my presence beg questions from those I come into contact with (what...is that? Are you...is that...cologne? Where did you get that? What is that called? Will you have sex with me? Would you mind doing it right here? Let's get married--just for the next ten minutes? Actually, can I just have that smell, so we can have sex alone?) and it is abundantly clear, from the moment you first smell it, that Tabac's creator refined and refined again in her effort to achieve such a careful, unlikely balance.

While it falls within the olfactory range of 1740 and Fougere Bengale, Tabac distinguishes itself enough that it's worth having all three--if, like me, you're that obsessively inclined, and worried about redundancy. Tabac speaks to those fragrances the way one smoky-voiced singer speaks to another, through tone and texture, but the music and personality are unique. The vetiver in Tabac imbues it with qualities neither 1740 nor Bengale possess, moving it farther away from the insular combustion immortelle gives the former, the sense that 1740 has a lot on its mind, is troubled and needs some time to think about it. 1740 harbors things, relishing its drama. To 1740, Tabac says, Hey, lighten up; it might never happen.

Which isn't to say Tabac is happy-go-lucky; just that it doesn't brood. Like Fougere Bengale, which uses lavender in a similar way, as if to clear its head, Tabac loosens up with vetiver. Unlike Bengale, which comes on like the most intoxicating (or, okay, I'll give some of you this: nauseating) spice cabinet this side of reality, Tabac has a persistent but subtle tangy aspect, a barely there fruit accord which operates similarly to the cassis bud in Iris Bleu Gris, subverting what might otherwise be an austere, stand-offish disposition. Tabac is foody, but more savory than sweet. It has woodsy undertones to it. Clove, tonka, labdanum, leather. Need I say more? If you're into this sort of thing, I'm guessing not.

I've resorted to comparison in an effort to convey an inexplciable mystery. Shame on me. Stupid, I know--but to do otherwise I would need a vocabulary which hasn't been invented yet. I love this stuff.
Posted by Brian at 7/17/2009 10:16:00 AM

great review. tried and loved it, too.

oh my god. so funny.

I have a sample of this, and must admit it has grown on me a lot (at first I wasn't sure of the 'dirt' note in the opening).

Laurie of SSS has blogged that the 'till' is down because she is dealing with life stuff which demands her full attention at the moment. She hasn't said when it will be back, but she is still blogging about her works in progress.

Yes, yes, yes!! Tabac is a happy, wonderful thing. Laurie has been tinkering with a tweaking just a bit...you can go through archives in her blog to find out about that...but I heartily agree with the direction you are bouncing around in, trying to find words for it.

I believe that if you read Laurie's blog, she offers to respond to you via e-mail, even though the shopping cart is down...she also directs you to The Perfumed Court and Posh Peasant for samples.

I am so happy to see Tabac Aurea getting its fair share of praise. This one was a very unlikely candidate for me - just testing it b/c I could - and then it completely blew my socks off! It is the best most amazing tobacco/leather fragrance I've ever smelled. It is so well blended - it sinks into the skin and the sillage dances into the nose! The development is rich and warm and inviting. It is absolutely a modern classic and deserves all the attention it can get. I wear it, my husband wears it...it is amazing! Anyone with an attention to detail and attraction to gloriously rich fragrances should wear it. Tabac smells amazing, rich, warm, sexy from opening to dry down and lasts forever and overnight. It is an outstanding fragrance - great review!

You can totally contact Laurie Erickson through her SSS email even though her cart is down, and she will get back to you.

Really, Tania? Dirt? I just don't get that. How interesting. Good to know that Laurie is still taking private orders, or considering them, because after wearing this again all day, nothing short of a full bottle will do. The thought I might run out, that any little spritz might be my last, terrifies me. I need a surplus. As for longevity: what is it about the trio I mentioned, 1740, Bengale, and Tabac, that gives them such atypical tenacity? It's unreal. I put Tabac on this morning, first thing. One spray to the forearm, one to the wrist. I could still smell it an hour ago when I took a shower. It's 4:30. After my shower and some business out and about, I can still smell the stuff.

I decided I should comment more often so you know I'm reading everything you write. As a writer myself, I can tell how much hard work (and love) you are both putting into this blog. Brian, you write so beautifully, whether it is an evocative childhood memory or a hilarious recounting of time spent at the perfume counter. (Oh, and I'm also learning about perfume and compiling quite a long list of new fragrances to try.)

Nice exploration of Tabac, Brian. I think it's Ms. Erickson's most accomplished piece to date -- rich, deep and tenacious, yet strangely subtle, and I'm looking forward to more new releases from her direction.

I'm looking forward to trying this when SSS is up and running again. Sounds dreamy.....

I have a sample of this that I haven't tried yet; I obviously need to remedy this situation at once!

Laurie referenced you review on her blog, which directed me here. I'm so glad she did as I loved your writing and your review. You are now bookmarked.

I have a sample of this on the way, and your review has made me even more impatient to try it than I already am. And I'd recommend SSS's Champagne de Bois if you haven't tried that one. I feel the same way about it as you do TA. I'd love to hear your take on it.

Hi Nina, hi Rappleyea. Thanks for reading. Part of the reward involved in holding these drawings, for us, is that we find out a little bit more about our readers. You're right. We put a lot of time into it. And I think we both love doing it, or we wouldn't be, but it's nice when people emerge from the void which is the internet to connect and let us know they're here.

Tammy! You haven't tried it yet? What are you waiting for? Get on it. Lovely stuff.

Nathan, shockingly, I'm just starting out with SSS's fragrances. Abigail shared some samples with me. I love everything I've smelled, and they all seem to last fairly well. The violets are particularly great.

Thank you for these words:
"Unlike Bengale, which comes on like the most intoxicating (or, okay, I'll give some of you this: nauseating) spice cabinet this side of reality"
I feel the same way and I felt very lonely with this feeling until I read your review. No tobacco here but burnt tar.