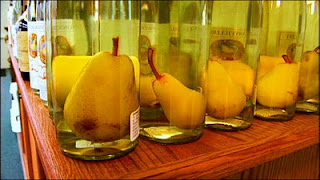 While not so surprised that I like it, I am surprised how little Aziyade reminds me of the things I'm told it should. What's not to like? Are there many who don't like Serge Lutens' Arabie? I don't know many of them. It's likable, too. It smells to me of dates marinated in various resins, and Aziyade has some of those fruity woody aspects too. As do Kenzo Elephant and Feminite du Bois. But Aziyade has so many peculiar qualities those don't that I'm not sure I would have made the connection on my own. For me, likability is about the biggest thing they have in common.

I made a comment the other day, talking about Noix De Tuberose, that tuberose fragrances often seem very similar, with only very fine distinctions. I see the school of thought which places Aziyade among the sugared fruits and woods of the perfume world, but it has such a nice, tart angle, with some leather and terpenoids going on in there too. I get some pine, though it isn't listed. I think this might be ginger, which is. None of the notes come as a shock to me. Yes, okay, there are those crystallized dates and prunes, but they're more of a backdrop. Orange is a big player here, adding to that terpenoid zing. Pomegranate, a cameo. The ginger, almond, cardamom, cinnamon, cumin, carob and ciste season the mix in a way which feels uniquely spicy. Aziyade isn't a cold smell, it has some warmth, but it lacks the fuzzy splendor of Elephant and Arabie. Those have always reminded me of Cinnabar in a certain way: they heat up on the skin the way the smell of food on the stove spreads through the house.

Aziyade is brisk. I would call it radiant. It doesn't smell anything like them but its radiance brings Caleche and Clinique Wrappings to mind. Those have a similar, slightly camphorous edge for me which should probably be chalked up to aldehydes. Aziyade's tangy vibe isn't something I've smelled anywhere, except perhaps in another Parfum D'Empire fragrance, Ambre Russe. What to call this? Both make me think of a rich, high end liqueur like the one I sometimes see and covet: a pear floats inside, like a model ship in a bottle. Aziyade dries down into a dreamy booze of a fragrance. It doesn't have the forceful longevity of Elephant and Arabie but it lasts quite well. Actually, now that I bring it up, it smells a bit of pear.
Posted by Brian at 1/27/2010 12:40:00 PM

I just bought a bottle of "Arabie," I love it so much, and I have "Elephant" lined up in my sample queue. Now I have a third to try!! You make it sound delightful- I look forward to it.

HELP! I am new to all of this wonderful fragrance stuff...please do tell where does one buy the perfumes you speak of on this blog?

Hi Fooey. You can buy perfumes all over the place, from the mall (department stores, perfumania, etc) to online retailers. There are small and large companies to choose from, and for the most part they all have different selections. I shop a lot from Rei Rien because they have oddball deals and finds, but I also visit and shop at parfum1.com, fragrancenet.com, beautyencounter.com, miomia.com...

There are also unique brick and mortar shops with online presence. Three that come to mind and are well respected are luckyscent.com, aedes.com and one of my favorites, theperfumehouse.com.

All of these brick and mortar shops offer samples at a price, free with purchase. There are also decant sites, like theposhpeasant.com. These are great for spending some time with a fragrance before you purchase or buying less than a full bottle for whatever reason. You can also purchase niche lines there.

People search for vintage and other variably hard to find items on ebay.

I hope this helps. I also recommend checking out the other blogs on our blogroll. Many of the blogs list prices and details about where to find the perfumes they review.

I hope you come back and tell me what you think of Elephant. I love the stuff. Some people detest it. Elephant is a good name for it, because it has some bombast and is anything but delicate. I find it rich and heady and pretty dreamy. Potent, yes. Problem, no. Aziyade is a feather in comparison. It's also a lot more fun. I've heard it characterized as slightly trashy. I'm always suspicious of such pot calling kettle black decrees, myself.