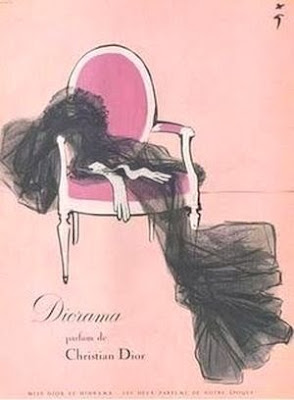 Some important questions: Where has Diorama been all my life? How is it that it’s taken me this long to procure a bottle?

I have never smelled vintage Diorama. I’m afraid to look for it now. I’m in love with reissued Diorama, and feel the need to wear Diorama and only Diorama for awhile to make up for lost time.

Diorama reminds me of Frederic Malle Le Parfum de Therese (also created by Roudnitska), which I smelled first and fell in love with first. Diorama and Therese seem to be very close sisters, with Diorama outdoing Therese in the sillage and longevity department and also not showcasing any aqueous nature. To me, Diorama is a classic fruity floral, but it appears to be categorized by the experts as a fruit chypre. I’ve read there are base notes of vetiver, oakmoss, civet and patchouli but these are not discernable for me, not until the way dry down. Fruits and white florals are showcased here; it’s all about melon, plum and peach with jasmine, tuberose and very soft spices if you’re looking for them. Perhaps it is because of this fruity quality, with fruity floral fragrances being an enormous trend of the past decade, which makes Diorama seem completely modern to me. I thought the same thing when I first smelled Therese; it seemed strange that Therese was created decades ago, because any sort of fruitiness seems modern. Maybe it’s just my own perception but mossy chypres and powdery scents seem old fashioned, while fruity fragrances do not. The fruity quality in Diorama is light, bright, effervescent and blended with white florals and soft spices. There’s also some similarity to YSL Yvresse, which is another sparkling and classic fruity scent worth checking out.

I’ve read several reviews which describe Diorama as buttery. Oddly, Diorama is the opposite for me, it starts off rather sharp and only in the way dry down would I describe it as buttery. One spice I notice is saffron. I have no idea if saffron is among the listed notes, but I dig saffron and it works like magic here.

Coming of age in the 80’s I have the tendency to prefer big fragrances. Diorama isn’t crazy big, but it’s big enough to please me (smirks at perverseness of this sentence). I’m of the thinking that good sillage and longevity mean I’m getting my money’s worth. For those who read ISTIA regularly, you won’t need to ‘spray yourself wet’ with Diorama (smirking, again, what’s with the perverted minds?!).

I read a few reviews on other perfume blogs before writing my own and realized I have a very different experience with Diorama. Diorama doesn’t make me recall Paris or women in fur, pearls, diamonds and couture evening gowns. Instead Diorama smells youthful, gregarious, brimming with a zest and zeal for life. Diorama smells like the study of nature on an early spring day. The essence of Diorama is a verb; it’s budding, growing, juicy and bursting forth with fresh natural vapors and dewy realism.

I never smelled the vintage either, so I won't be making sad comparisons. Actually, I've never smelled a Dior, of any kind, because it appeared that my choices were to learn to mourn what's gone, or learn to dislike what's now. Now I'll be trying this one.

Hey ChickenFreak,
Yes, Diorama is gooood. I will never sniff the vintage now because I don't want to ruin the love for the reissue.

Arrrrgh. I'm grinding my teeth... no, not another one to try!!

Actally, if it shares some DNA with Yvresse, I'm probably not up for Diorama. Both Yvresse and So Pretty were uncomfortable on my skin and never seemed to cohere - they stayed bits-and-piece-y, like the fruits were fighting with the moss. Femme (new) was a disappointment on that level as well, so maybe Diorama's not for me.

Off topic: Been wearing my Havana Vanille; I think it's def. better and more complex than the TF Tobacco Vanille, and I like it. All the same, I find that I would often rather wear either Dolce Vita OR Tabac Aurea, whichever component of the scent I'm in the mood for. (Happy discovery the other day, though - if you put Beyond Love next to the drydown of Havana Vanille, it is FABULOUS.)

Oh Linden!! Oh Abigail, I am on a search for linden! As you know my sad fate with the best linden out there, La Chasse Aux Papillons... :(

I will definitely try this one.

Monika,
I have a suggestion for you: you ought to try Bond No. 9 EAU de NOHO. This is a most beautious linden and it might replace your love of La Chasse... so give it a shot! :-)

Mals86,
Diorama does share a bit of DNA with Yvresse but once dried down Diorama is VERY different. It's smoother, less fruity and loses the sparking/efferevescent/aldehyde quality. Even if you hate Yvresse it's possible you'd love Diorama. But I mentioned Yvresse because at the very start Diorama is sharply fruity and quite sparkling.

And, I agree, as much as I love Havana Vanille, SSS Tabac Aurea is in it's own class.

Any old excuse will do to put another Dior closer to the top of the never-ending "wish list".