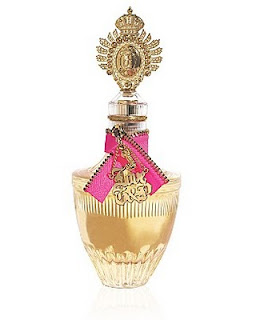 I must be one of the only people on Planet Perfume immune to the charms of the trinket-laden flagship Juicy Couture perfume bottle. It isn't the worst thing imaginable, I guess, and struggling for something nice to say, I would compliment the lucite cap. The necklace wound tightly around the neck I can do--and have done--without. The fragrance itself, meanwhile, is a wonderful thing, as though someone took the shoulder pads out of Herrera, salting the rim of her fruity cocktail before placing it back in her hand. Juicy Couture is much better than it has any reason to be. Turns out, salt is a good seasoning for Tuberose, toning it down without diminishing its depth. The notes list watermelon, a notion which, like those on the bottle, seems totally silly.
I've never wasted much time with Juicy Couture's second fragrance, Viva La Juicy, the bottle of which is nearly identical to the first. So let's just move on to the latest, Couture Couture, and I'll get this right out of the way: I like the perfume enough to buy the bottle. I put it that way because, while I do like Couture Couture much more than most people seem to, I can't tell you I'd buy it without this packaging.
I can't get over how impressed I am with this bottle. I want six in six different sizes. It's like something the set department of Marie Antoinette sold at auction after production wrapped. It has an interesting shape to it, and little embellishments have been cut into the glass. It has a fancy gold cap which reminds me of things I've seen in antique stores on old flatware or religious iconography. It's like a Chambord liqueur bottle if a Chambord liqueur bottle didn't look like something you'd use as an air-freshener in your car. The ribbon around its neck is a zipper strip, and from the broken zipper pull dangle gold-plated gew-gaws, one a textured charm, the other I don't really know what. It sits on the dresser with the kind of authority only good design and stacks of cold hard cash command.
And what of the perfume itself? Look, I don't smell the grape people are talking about. It's in the pyramid, but so is amber, and I don't smell that either. Maybe it's just me. Couture Couture reminds me of things I have--not exactly, meaning it isn't redundant, but it recalls them, which is to say it's something I would own. I'm not sure I would pick it up and exclaim "Fruity" with a wrinkled nose. And it's curious to me that so many reviewers on makeupalley do, when just as many nearly faint in despair at how much it reminds them of something their mother slash grandmother might wear. This alone puts us in entirely separate camps. To anyone afraid of smelling like her grandmother, I'd say, grow up. There are far worse things to smell like. Sniff from a bottle of Secretions Magnifiques and get back to me. I've run these comments through a tween-speak translator and what they seem to be saying is that Couture Couture doesn't smell as "young" as Britney Spears Midnight Fantasy has conditioned them to expect. A further decoding of this would be: it doesn't smell like pastry without everything but the pie filling.
Couture Couture seems to update an older template in ways the original Juicy Couture did, lightening things up, but it retains some quality that looks backward, if only fleetingly. It's far from old fashioned. I smell more vanilla than fruit, and though honeysuckle and jasmine are said to be in the mix I'm getting something which is too blended to say. You might hear tell of a hairspray note. This always perks up my ears, but probably in a different direction than it does yours. I tend to like what a good hairspray note does for a perfume. I like the images of cosmetics and coiffure it elicits. I liked it in Insolence, I liked it in Jean Paul Gaultier Classique, and I rather like it here, though it's much less discernible than in those.
The fragrance is eau de parfum strength, though it lacks the tenacious vigor of its oldest sibling. It wears fairly close to the skin. I like it. It strikes me as an admirable effort. I'm not a star-rating kind of guy, but I can tell you, at least, that I bought it, and not just on the basis of the bottle alone. But the bottle was definitely a determining factor. Ultimately, Couture Couture serves as a forceful reminder of just how effective good design and packaging can be. "I always judge a book by its cover," says company co-founder Skaist-Levy, blissfully superficial. I wish other fragrance lines would take more of the same approach.
Posted by Brian at 1/09/2010 10:43:00 AM

Their first fragrance was so "nothing special" that I didn't even bother with the 2nd one. Now here's a 3rd...you've made me curious. I'll at least spray some on, wear it for a few and then see what happens. Whereas before your review, I wouldn't have bothered with this one either. I like that it's not "tween" smelling.

My 14yo daughter was given a spray sample of Juicy Couture, the original, for Christmas; I haven't tested yet. (Daughter has graciously offered it for the tuberose review series.) My sniff of her arm does not exactly inspire me, but I'm going to give it a fair shot. (Why not? Heck, I just gave Giorgio a test wearing for the sake of the review series. Eek.)

Oh, but the bottle for Couture Couture... my late grandmother would have just *adored* that bottle! She was very fond of froofy knickknacks. Gilt, lace, you name it...

I'm a big fan of the original JC. Love it! Didn't care for Viva, though (CANDY), and haven't tried this one except for on a magazine strip. It's had such negative reviews that I've stayed away. Now I'm curious! And that bottle is such fun!

The packaging for all the Juicy Couture perfumes has always totally put me off. Your review has really intrigued me. I will give them a try as soon as I can get my hands on some.

Totally agree with you on Secretions Magnifiques too. It's a hillarious fragrance, only fit for the bin. Surely a joke.