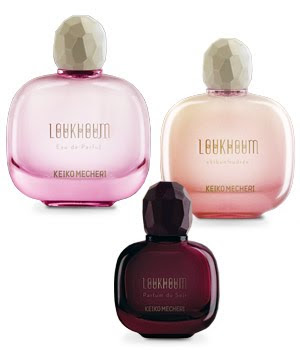 I noticed when Loukhoum was first introduced all the perfumistas seemed to love it. Then suddenly it became passe. I’m not sure why, maybe because KM doesn’t have the back story, the brand mystique (read: heaps of $$ for marketing) or French roots that seem to keep many houses rather lofty in our minds. The first time I smelled Loukhoum I was blown away. I am not a gourmand lover but Loukhoum is a sweet gourmand that manages to be a proper perfume. It’s complex enough to keep the scent interesting, it isn’t just a sweet dessert but layers of rose petals, powder, almonds and honey. Original Loukhoum is a confection, to be sure, but it’s brilliant because it manages to be a wearable perfume for those who want to leave something besides a patisserie trail.

In 2008 there were two additional Loukhoums added to Keiko Mecheri’s line-up. Both were created by Yann Vasnier and seem to have taken aspects, more specifically certain notes, from original Loukhoum and magnified them as well as lessening the gourmand nature of the fragrance. Parfum de Soir, is parfum concentration, and focuses on the rose note, truly magnifies it, and adds a bit of oud, patchouli and tonka bean to the mix. Parfum de Soir seems well-liked by many fragrance reviewers, such as Nathan Branch who calls it a “femme fatale” sort of scent. Donna at Perfume Smellin’ Things fell for Parfum du Soir as well, who calls it “not a sugar fest but a celebration of sensuality.”

Contrary to what you might assume, Parfum du Soir is less sweet than original Loukhoum and, similar to the nature of most pure parfums, it stays closer to the skin. Parfum du Soir isn’t nearly the potent blast of sweetness as the original, but it’s still sweet and downright delectable.

Now for my favorite of the three, Loukhoum Eau Poudree. Loukhoum Eau Poudree is fluffy whipped heliotrope heaven on a bed of white rose petals. The powdery element is created by orris powder so this isn’t death by baby powder like Teint de Neige. Eau Poudree is sweet yet airy and not dense, you can smell the space between the notes. The vanilla, almond and musk play into the confection theme but somehow the overall scent manages to be sexy, soothing and insanely addictive. Two of my perfume pals tried this recently and had to have a bottle. And the odd part is that I wouldn’t have pegged either of them for liking this sort of sweet-gourmand fragrance (I’m not the type either and it’s surprises me that I love Eau Poudree so much).

You are right, Eau Poudrée is a perfect and complete parfum. I love it, but it's hard to find.

Oh my! Well I've never been a Keiko Mecheri lover. Didn't care for the original Loukhoum since I'd already found an SL Louve to love, but I've never tried Eau Poudree. Now, I feel, I must!