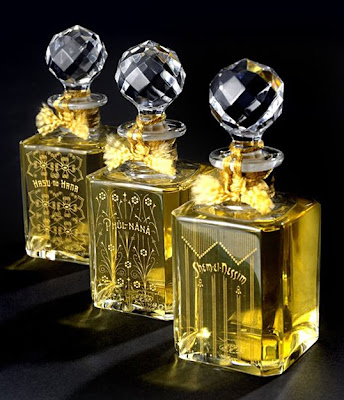 I’m truly pleased that many readers enjoyed my week-long tribute to Annick Goutal. This house deserves all the accolades it receives. One commenter, Dain, made me laugh when she called this week of reviews: Justice.

Does anyone know where to find Guerlain Habit Rouge L'Extrait (parfum/extrait)? I’ve been looking – I know for sure it exists but cannot find it.

Lovely little gem of the week: Hermes Caleche Fleurs de Mediterranee. This is a soapy, aldehydic nummy fest. Not particularly similar to the original Caleche.

American Idol: Thank goodness the crappy part is over. Next week we’re onto Hollywood. Is this when Ellen D. shows up? Hope so. I read a rumor that Howard Stern is being considered to replace Simon next year. Wow, the combo of Ellen and Howard would be odd. I can’t imagine Howard leaving NYC to be in LA for such a stretch of time, though. He’d miss Beth and Scores.

The above pic are the limited edition Grossmith bottles. I’ll include a pic of the normal bottles below to be fair. But the LE bottles make me lose all financial sensibility and want to order them pronto. 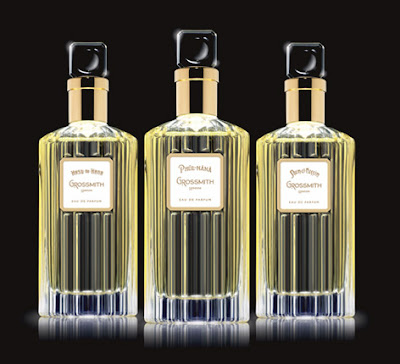 Beverage of the week: I’m still hooked on Diet Dr. P - but I ventured out with some Boylen’s Birch Beer and it was unusually good.

Luckyscent sent me a sample of By Kilian Rose Oud (they just sent it – first time this has happened to me). Rose Oud is probably going to be a huge hit for rosey oud lovers if they aren’t disturbed by the silly price tag. I’m not an Oud-girl so it’s hard for me to judge but this doesn’t conjure band-aids at least. I think it might even be nice – less syrupy than the Montale’s.

Finally got a bottle of Ormonde Jayne Tiare and Orris Noir. I haven’t worn either long enough for an accurate assessment but Tiare reminds me of a tropical Diorama. Diorama is on my mind since I discovered it recently and fell in lurve but I think there’s something similar here. The newer packaging from OJ is quite nice. Lovely to display these bottles. (I need to stop using the word “lovely.” Seems so teeth-clenched to me).

Um, does Amouage Epic Woman remind anyone else of Serge Lutens Chypre Rouge?

I now officially pump my own gas. I know you think I’m mad for not having done this prior to moving to NM; but lemme explain... in MA full service was always an option (which I took) and in NJ there was *only* full service. So, after spilling gasoline all over myself about 2 wks ago (yeah, I used to like the smell of gas, once you wear it, believe me it’s not a nice smell) I now know the ins and outs of pumping gas. I feel accomplished and self sufficient. (!)

I can’t put words to exactly why but seeing the bikini spread of the Octo-Mom in one of those gossip rags was disturbing. And, good for her if she hasn’t had any work done but she certainly looks like she’s had some stuff done. I mean seriously, how could those massive stretch marks vanish in one year? And how can her stomach be completely flat after giving birth to 8 babies one year ago (on top of many other kids before that)? She does remind me of Angelina Jolie – I think it’s the lips and the kid obsession.

Jean Francois Latty, in house perfume for Teo Cabanel, has created a new fragrance for the house. It launches in a month or so. They are keeping the fragrance a secret but I’m giddy with optimism since Alahine is my HG.

Hi,
I always enjoy your various misc. comments. And I laughed about octomom, although I haven't seen the spread. As a Mom of triplets (now in college, yikes!) I can tell you..the stomach does not look the same without surgery. Now that I'm too old for it to matter, I'm wishing I'd had the surgery years ago. I haven't worn a bikini in 18 years.
Wow, too much information here, but I'll just fly with it.

Cynthia,
I unfortunately don't have kids myself but all my friends who have take a looong time to recover and get their their bodies back. Usually only a single birth leaves mighty remarkable stretchies!
Awww, what a neat thing, being a Mom of triplets, you must not have slept for the first 10 years. And then they were teenagers so there's that...

Saks in Boston carries Habit Rouge extrait, last time I checked—but that was months ago.

Your TWRT posts make my day. I think they are one of the best features in the fragrance blogs online.

It just so happens that Tiare is my SOTD. A MUA penpal sent me a really generous RAOK sample of this (and so much else). At 1st sampling, I decided it wasn't for me, because of that sharp opening. But now I can't get enough and am kicking myself for not having gone in on a travel set with someone while I could have, a few months ago. I am a big OJ fan. I love Ta'if, Woman, and Champaca, all for different reasons. Tiare reminds me of something, but I just can't quite put my finger on what it is. I haven't tried Diorama (or Cristalle, which many reviews seem to compare it to). I guess that's next on my must-try list. :)

I read somewhere (LT's NZZfolio, I think) that there is only enough stash to make 160 bottles of Tiare, and now I'm worried that I may have missed my opp.

Another source for Habit Rouge extrait: The Neiman's in Chicago. (A little birdie told me she saw some there just last week...)

My older son *likes* the smell of gasoline. Am going to spot him some of my little decant of Nostalgia, to see if he likes that.

Idol early part is over? Hmm; might need to peek in before I get caught in Olympics fever. Ew, Stern.

...and hoping that the snow *we've* been promised for Tuesday does arrive. It's just too darn weird to have snow to the southwest, and southeast, but nothing here in Great Lakes snow zone.

A new Teo Cabanel?? Exciting. They're all well-done, and my teenage daughter really loves Meloe.

I had no idea full service gas even existed, and I thought it was a west coast phenomenon. I was massively uncomfortable when someone had to pump my gas for me when I do this all the time myself.

But I digress. I'm curious about this Alahine I hear so much about. How does the parfum compare to the eau de parfum? I think I need to be sampling this.

Abigail,
are you sure the pix aren't just photoshopped/airbrushed? Cause I think even if she had a tuck, that leaves bad scars. And as far as I know, nothing gets rid of stretchmarks except time, and even then they only fade..

You're right, those Grossmith bottles are beeyootiful!
I'm going to get some samples, I'm eager to try them. But maybe I shouldn't, because then I will want them... *sigh*...

I haven't been watching American Idol this year, but I had to laugh when Chris Colfer (Kurt from 'Glee') tweeted that Sue Sylvester should be a judge. Can you imagine it? No holds barred! Because 'That's how Sue C's it!'
Now that, I'd watch.

Abigail,
Wow, I am going to agree that those Grossmith bottles are gorgeous. With no sense of scale, they look like liquor decanters. I'd hate to have them out and have a visitor take a swig! I imagine they're a wee bit smaller than that though.
Keep writing: I'm enjoying it!
Laura M.