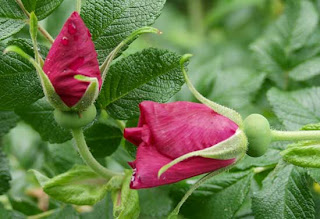 Rosa rugosa (Rugosa Rose, Japanese Rose, or Ramanas Rose) is a species of rose native to eastern Asian, where it grows on the shore often on sand dunes. When I was a child I had a sandbox in my yard. Since the area around the sand box inevitably became sandy my Mother planted Rugosa rose bushes to form a barrier between the sandbox and the lawn. The fragrance of a Rugosa rose is unmistakable; Rugosa has some similarity with the aroma of a Tea Rose combined with a green lemony geranium smell. The flower itself isn’t as beautiful as most other roses so I’ve always thought that the Rugosa rose makes up for its simple appearance with a strikingly gorgeous aroma.

Annick Goutal’s Ce Soir ou Jamais smells exactly like a Rugosa rose to me. Ce Soir ou Jamais roughly translates to “Tonight or Never” in English – but the intention of the name is meant to be an “invitation to love.” Ce Soir ou Jamais is an astonishingly beautiful rose fragrance that starts off a bit sharp and lemony but dries down to an achingly beautiful Rugosa rose scent. There are many well orchestrated notes at play in this fragrance; violet, jasmine, pear, cassis, hibiscus, ambrette seed…I’ve read that there are 160 notes in Ce Soir ou Jamais and that it took Goutal over ten years to finish. Ce Soir ou Jamais is relatively linear with the only change occurring when the scent becomes softer, velvety and luscious from its initial sharp, lemony and heady moments. It’s realistic as opposed to perfumey – I feel as if I’m sniffing an actual rose garden in nature with its dewy green leaves and luscious blooms and petals.

Ce Soir ou Jamais is easily one of the most beautiful rose fragrances I’ve ever encountered.

Really? I'd love to get a whiff. Must investigate.

I have a fantastic apothecary rose, whose scent I'd like to find in a perfume. But when it comes to garden-true notes (soliflore or not), I like Mille et Une Roses and Fredrick Malle Une Rose.

And a few Rosines, of course.

Every Rosine I've tried is beautiful, too. And, I agree with you, FM's Une Rose, Lipstick Rose and SL's Sa Majeste La Rose are phenomenal. This Annick Goutal is another gorgeous rose in the same league - except its more delicate and soft - seems to want to be worn in spring or summer - where Une Rose and Sa Majeste could easily be worn in winter.

I still haven't tried Mille et Rose - I have the feeling it's similar to AG's.

Would you compare this rose with Le Labo city exclusive scent Baie Rose 26?