From the back of the closet: Gucci Envy 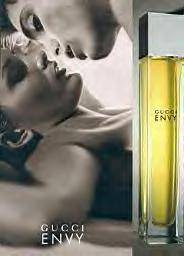 Envy is brilliant. Envy is all about greenness, but not a specific or natural green, instead it’s an abstract greenness. Envy could be described as a soft, modern, fresh, green fragrance but that might cause you to think it’s boring. Envy isn’t boring. However it is distinctly fresh and modern. Envy is at first boldly green but it soon tempers itself and becomes softly soothing, it’s not strident or sharp like like Vent Vert or Chanel No. 19.

Envy was created by Maurice Roucel in 1997. Roucel has created some of my favorites: Bond’s Musc Ravageur, Broadway Nite, New Haarlem, Hermes 24 Faubourg and the newest Malle, Dans Tes Bras (which is still an enigma to me). Roucel excels at creating the abstract perfume. None of Roucel’s fragrances just listed smell like exact replicas of something natural. Instead, Roucel creates new aromas that more or less smell like the idea of something. In the case of Guccy Envy, he created a scent that smells “green,” the abstract smell of the color green.

I tried my bottle of Envy the other day amd, sadly, it had turned. I'm a bit too broke lately to spring for another, but I do like it, so maybe I'll see how cheap I can find it online.

Frederic Malle has come to Liberty, London (yay? My nose says yes, my bank balance says no!)
And I managed to get samples, including Dans Tes Bras. On me, it's a slightly sweeter Unicorn Spell, more obviously violet. But no longevity whatsoever, so I'm not taking it further than a sample. (My bank balance: *sigh of relief!* Until it remembers that I did really like Carnal Flower...)

Dans Tes Bras is an oddball - definitely not full bottle worthy for me - but I can't decide whether I like it or dislike it...it's a scented enigma...

Carnal Flower is the very definition of swoon.

True - but I nearly swooned when I saw the price! ;-) So I'll keep my sample for 'special', and dream of one day owning an FB.