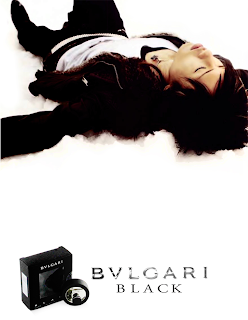 Maybe I’m too far along in my perfume addiction, but I’ve never thought of Black as weird or edgy – I’d call it interesting. I’ve also never thought of it as among the top 10 best perfumes of all time. Sure there are hints of smoky rubber but they seem low key and soft. Black is mostly a fragrance about vanilla. It starts off smelling like celery salt. Then it morphs into smoky celery salt and rubber. Then when it finally settles down it becomes prominently a soft woody, celeriac vanilla. I really love Bvlgari Black particularly the celery salt bits. Overall it’s a cozy comfort scent for me. I put Bvlgari Black in the same category as People of the Labyrinth’s Luctor et Emergo. They’re both hard to define and seem in a category all their own, they both have cult-like followings and they’re both comfort scents. I’ve never figured out what’s so ‘black’ about Bvlgari Black. I know there’s black tea among the notes but I don’t detect it at all. If I where to give a color label to Black I’d say it’s Pale Green.

I’ve been wearing Black a lot since I read Perfumes: The Guide by Turin & Sanchez. I was somewhat shocked by the high marks it received and very shocked that it placed in the top 10 perfumes of all time. Of course, being a scholar in the field of olfactory science, means Turin knows much more than me when it comes to perfume. Turin is knowledgeable of all the elaborate details of perfume making. He knows how difficult certain notes are to create and he knows more about the history and structure of perfume than I ever will. But Bvlgari Black just isn’t that amazing for me. I do love it, just like I love POTL Luctor et Emergo, but I wouldn’t place POTL in the top 10 either.

I need to subtract points from Black because it lacks longevity and has virtually zero sillage. When I wear Black I need to douse myself in it, (I mean douse, like 10 sprays) in order to smell it for about 3 hours. The first hour is the most interesting. I like Black the best before it dries down to a comfy vanilla. I fail to understand what Turin is raving about in his review of Black. To me, Black seems like an interesting starting point. I suppose it is groundbreaking in its structure and its ability to morph through an unusual assortment of notes and yet still smell pleasing and beautiful. Perhaps Menardo or another perfumer could build upon this idea but make it more daring and also add some longevity and sillage this time.

Black is an interesting fragrance and it smells really good. I do think that more people ought to try it because it’s a worthy fragrance for those that want something unusual yet not too odd. Black is easy to wear and unlike POTL it can be had for cheap.

I was looking for a new go-to scent which means FB to me, as my skin soaks up everything. I wanted something a little challenging and not horribly expensive. Someone had sent me a vial of BB in a swap and it really surprised me. I expected to smell like a tire graveyard, but not at all -- it's just as you describe, vanilla and celery and a whiff of rubber from time to time. It's nice, I like to wear to to sleep and even the DH likes it. But top 10 of all time? In 1998 I guess BB would have seemed very edgy, and for the mainstream I guess it still is. But I see it as an everyday scent.

I was surprised about some of the things you wrote about Black Bulgari.
I have this perfume because it is in my opinion, a piece of art.
I lasts on my skin, not hours, but if I would be someone that does not shower daily, I could say it would last 48 hours.
I have a wool sweater that has capture the fragrance and it never left it.
I think the powdery notes combined with the rubber is simply amazing, creative and sexy.
Not to mention the design of the bottle, really urban, like the perfume.
About Luca, I have to disagree with you. he does not know more about perfume than any other person that dedicates time for this passion.
I smell the tea note but not the celery you mention. Does that make me or you less qualified than the other? Not really!
I love your blog, hope to see you in mine.

I consider Black to be avant garde, a novelty of sorts.

And I'm glad you experience good longevity - I wish I did! Black disappears on me unless I use half the bottle...:-(

I love the perfume, but it is also not my favorite.
I also love the concept of Eau de Marveilles - Hermés, but I have it in the closet. I don't wear it because it does not express my personality or brings me the mood I wish. But still, I love the concept, like BB.
I tend to classify perfumes in wearables/concepts.
BB is a wearable concept :-) hahahaha
kisses Simone.

A "concept" perfume is exactly right for Bvlgari Black.

I have the same relationship with Hermes Eau des Merveilles! I love it in theory but I never wear it. The bottle is pretty to look at in the back of my closet, too...

wow, indeed interesting that you feel the same way about Eau de marveilles!