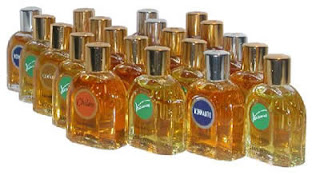 First: Guerlain’s newest, Le Petit Robe Noire is atrocious. It smells like cherry cough syrup/fruit punch/berry throat lozenges. Guess what folks? Perfume is not simply an art but a business! Guerlain is in the business of making money and Robe Noire will probably sell (to a demographic other than perfumistas).

With the help of an absolute angel – a fragrant fairy princess – a true vintage perfume investigator and spy - and a charming and dear, dear person – I was able to acquire 10 of the 12 perfumes from the legendary Jean Patou Ma Collection. I’m head over heels for Chaldee. I’m crazy for Caline. I’ve lost consciousness over Vacances. All of these are now available at The Posh Peasant – I shudder to think of these bottles disappearing (I promise I won’t freak out and remove them from the site – at least not tonight!)

Big Love is such a great show. I’m finding Nicki’s story line compelling. I’m afraid Sara is going to stay close to home and live a polygamist life now that she’s not going to ASU. Question: Towards the end of Sunday’s episode, there’s a man in a dress in the barn when Roman tries to force Kathy to marry Hollis Green. Is that a man or a woman in the barn with a dress on? I thought that was a man – is she a cross-dressing Mormon?! I’m confused. Stabbing the pig with a pitchfork was unacceptable. Oh, and I love Bill’s mother – she’s a fantastic character.

I purchased Barbara Bui White Oil for next to nothing ($14.95). At first I was disappointed because it doesn’t have much scent. Then I realized it’s a fantastic base for helping perfume last longer. The Barbara Bui White Oil is non-greasy – and used under a fragrance I’ve noticed the scent definitely lasts longer.

I’ve never watched The Bachelor but it’s on TV right now and I’m finding the whole premise awkward and staged.

I have three paphiopedilum orchids just beginning to bloom – yippee!

Last weekend I made the easiest soup and it was absolutely delicious. I pureed broccoli, carrots, zucchini, cauliflower, celery, potatoes, leeks, onions and tons of garlic in a blender (after boiling). I simply pureed everything and then added a few tablespoons of butter with salt and pepper and it was crazy good. I served it with garlic bread. The soup itself was thick and a light green in color. The addition of fresh herbs could send this over the top.

Anyone from New Zealand out there? How do you find the characterization of New Zealand on Flight of the Conchords? It’s hysterically funny but I rather cringe when they poke fun at NZ so often.
Posted by Abigail at 3/02/2009 09:31:00 PM

I was just pointed this way by a post from Joey Comeau... Fascinating reading here for someone who's never really been into the whole perfume thing much.

I can't speak for all New Zealanders, but I certainly love it. I find that kiwi humour thrives on self-deprecation, and they are themselves kiwis...
Only kiwis can make fun of kiwis ;)

Hi A -- I think the character on Big Love is a woman -- I think. DH and I were discussing the same issue! Hollis Greene is the creepiest character ever. Well,of course there's Bruce Dern's character, and Alby, and,well, so many. It's worth the price of HBO.

I'll check out the Patous on Posh. And thank you for the comment on my post re Moment Supreme. I wanted to write a fitting tribute.